Vis menyen
Bellona.org > Latest News > Carbon Capture and Storage > The future of CCS in the Central and Eastern European Region

The future of CCS in the Central and Eastern European Region

CCS is now moving up on the climate agenda of many countries, as net-zero targets require a deep decarbonisation of the wider economy within the national level, given also the rising price of EU ETS allowances. To renew the discussion on the long-term deployment of CCS in Central and Eastern Europe, Bellona has entered a partnership with four stakeholders from the region to create and inform the debate on how to meet climate challenges and generate economic opportunities.

Published on January 22, 2021 by Bellona Europa 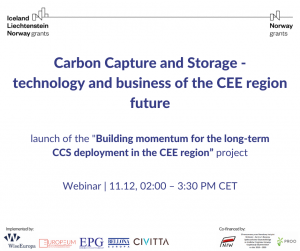 To renew the discussion on the long-term deployment of CCS in Central and Eastern Europe, Bellona has entered a partnership with four stakeholders from the region to create and inform the debate on how to meet climate challenges and generate economic opportunities. The project has been awarded a grant from the EEA and Norway Fund for regional cooperation: it will be taking place for the next 3 years in which Bellona joins the consortium sharing its technical expertise.

For over 15 years in fact, the Bellona Foundation has been engaged in the region, and developed, for example,  CCS roadmaps for countries such as Poland, Hungary, Greece, Ukraine and Romaina. New and different settings, contexts and opportunities have now come into play, where, due to climate neutrality targets, a new role for CCS is emerging.

CCS is now moving up on the climate agenda of many countries, as net-zero targets require a deep decarbonisation of the wider economy within the national level, given also the rising price of EU ETS allowances (highest it has ever been), is providing more solid backing to the more expensive investments that making industries will have to make to be part of the landscape of a carbon neutral EU by 2050.

With the support of such fund, the partners will focus on national level policy development as well as implementing analysis, roadmaps, and networking activities in neighbouring countries.The project was launched on the 11th December with a kick of event with opening remarks by the Norwegian State Secretary from the Ministry of Petroleum and Energy, Lars Andreas Lunde. Lunde stressed a key motivation for Norway to invest in the CCS technology and support projects that develop a common understanding of its role to combat climate change.

During the event, the project leader Aleksander Śniegocki, from WiseEuropa introduced the titled “Building momentum for the long-term CCS deployment in the CEE region”. Fine tuning CCS deployment among countries will be achieved through combining analytical work with capacity-building activities, national and regional publications and events focused on the importance of the timely CCS deployment. The need to reach net-zero in the EU by 2050 connects the different Member States, despite their very different industrial landscapes.

The project will cover Poland, Czech Republic, Slovakia, Hungary, Slovenia, Croatia, Romania, the Baltic states and Ukraine with the support of Bellona as the expertise partner. This broad set of countries is reflecting and putting together different contexts: some countries are landlocked, some are European member states, some part of the Eastern Partnership with the EU. This diversity in composition, also of industry and thereby targets for the CCS technology, will be the strength of the project, taking examples from previous partnerships that some countries have already undergone. In fact, climate infrastructure cooperation, or broader regional cooperation plans have been already successfully put in place and these have showed the potential for fostering a joint debate around CCS deployment.

The kick start event set the first milestone, while the next step will be to prepare national roadmaps in cooperation, present integrated knowledge base, which will be constituting the basis for further actions by the third quarter of next year.

From “too expensive” to “positive business case”

The deployment of CCS in the region could unlock technology and business potential and constitute a major drive for the economy in the future. Currently CCS technology is not advancing as fast as others, but will need to be pick up significantly if European climate targets are to be achieved. The project expects to build an evidence-based vision shared among key stakeholders that translates into  concrete policies and ventures. It does not only aim at increasing environmental and climate resilience, but should also be seen under a social and economic perspective.

During the launch event, Dr. Jan-Justus Andreas, Senior Industry Policy Manager at Bellona gave insights on the state of play of CCS in Europe and the pre-existing narrative existing on CCS too expensive, unnecessary, and risky. Proving to be instead a commercially sound technology. Andreas exaplained that the narrative is currently developing including CCS  as an essential part of toolbox of climate action.

In his outlook he further explained how CCS fits within the trajectory towards a net zero economy, not simply at a national level, but looking at a “cluster approach”. By presenting three CCS projects within Europe and showing interconnectivity within them, he further pointed out how CCS technology could take a leading role when needing to decarbonize at scale from current major emitters – whereas in the future, it could also provide negative emissions at scale within such network.

From a socio-economical perspective, with the current demand on governments to build back better and greener, CCS gives a positive business case on how investing in climate solutions can further foster a just transition generating new economic opportunities, retaining but also creating jobs, while attracting new investments.