Published on February 18, 2015 by Bellona Europa 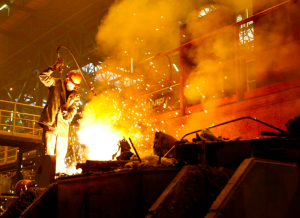 An steel worker at the Interpipe Mill in Dniepopetrovsk, Ukraine, which produces piping for the oil, gas, and power industries. Bellona Archive

Ratcheting up the pressure on the country is Kiev’s need to rapidly alter its energy legislation, bringing it into accord with that of the European Union and the European Energy Community.

The Bellona Foundation, a Norwegian-based energy and environmental NGO, has started a three-year project in Ukraine to assist in the ongoing transition of the country’s energy supply and industrial sector.

The project will focus on achievable energy solutions for Ukraine through cooperation with national experts, industry, government and a wide range of Norwegian and European specialist. The project is supported by the Norwegian Ministry of Foreign Affairs.

These first steps are critical, as they must balance the creation of an affordable electrical system that can also deliver supply security, environment performance and adhere to long-term European climate goals.

Accommodating both sides of this equation is the first priority in keeping the system functional.

Larisa Bronder of Bellona said of Ukrainian’s energy and industrial challenges that, “Reducing the dependency on Russian gas import while simultaneously countering the disruption in coal production is a great challenge for Ukraine’s economy.

“Effective action that brings improvements in energy efficiency and cutting of energy waste will be central in achieving both energy supply security and reducing CO2 intensity,” she said, in reference to emissions of carbon dioxide. The circumstances and pace of Ukraine’s energy transition would be overwhelming to any country. Europe has had two decades to develop and slowly integrate its members’ energy strategies.

Ukraine, on the other hand, must move from establishing relevant directives and energy planning to technological implementation at lightning speed.

But the country’s energy sector is behind the eight ball in reaching these goals. Ukraine

Ukraine spends three times as much energy to produce one dollar’s worth of gross domestic product (GDP) than does the EU, and its carbon emissions per unit of GDP are the highest in Europe, said Bronder.

“One of the major political risks for Ukraine is a lack of reform in the energy sector,” she added. “Energy efficiency improvement; diversification of energy sources and energy market liberalization are key tasks for the Ukrainian government today.”

What goals does Ukraine need to reach?

EU directives as varied as the Industrial Emissions Directive to the CO2 storage Directive will need to the transposed on Ukrainian law to be compatible with requirements of European energy community.

Bellona intents to assist Kiev in this transition by bringing European experts with hand-on experience to the table to help design and implement EU policies in Ukraine.

Bellona will host seminars over the course of the three year project to further develop technical capacity and foster pan-European relationships with Ukrainian government institutions, industry, and the public.

Industrial Emissions Directive requires that atmospheric pollutants such as SOx and NOx are limited. This will require the retirement of aging and polluting coal plants and upgrading Ukraine’s most modern and efficient plants.

New plants must also be compatible with the eventual low carbon electricity supply system. In the case of coal and gas generation, this will require the deployment of Carbon capture and Storage (CCS). Failure to recognize the long-term needs of the energy system may result in wasted investments that chain it to other technologies that are insufficient.

The purpose of the first work group meeting being held in Kiev on February 18 will be to reengage Ukrainian experts that enabled the success of Bellona’s previous work in Ukraine. Bellona’s previous work in Ukraine proved that there are experts and stakeholders who are really concern about their country’s future and contributed much to the Bellona’s report Ukraine&CCS: Perspectives for Industry and Energy Security.

Bellona has invited all interest parties to the working group meeting from among Ukraine’s local community of energy experts, to government officials and NGO representatives with the aim of addressing energy and climate issues.

As the situation has changed dramatically since late 2013, Bellona is eager to include the views of our expert work group in order to prioritize actions. The meeting includes presentation on the current state of play of Ukrainian energy discussions.

In addition Bellona’s project and an update on CCS planning in Europe and globally is under discussion.