The Norwegian parliament formally approved on December 15th the budget proposal for 2021 from the conservative coalition government, which includes funding for the Longship – or in Norwegian: ‘Langskip’ – project, which promises to be the world’s first complete CO2 capture, transport and storage (CCS) system based on emissions from industry, storing the captured CO2 in offshore deep geologic formations. 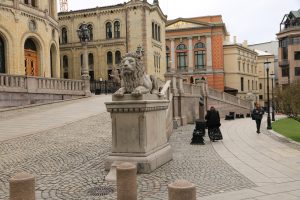 The Norwegian parliament formally approved on December 15th the budget proposal for 2021 from the conservative coalition government, which includes funding for the Longship – or in Norwegian: ‘Langskip’ – project, which promises to be the world’s first complete CO2 capture, transport and storage (CCS) system based on emissions from industry, storing the captured CO2 in offshore deep geologic formations.

While the Longship funding approval is a breakthrough for industrial CCS, it is the result of a process that began as a specific environmental campaign by Bellona over 20 years ago, which has evolved and grown to today.

Bellona’s first public advocacy campaign for CCS started in 1996. At that time, it was relevant for Norwegian policy. The question was whether or not to build new natural gas power plants on the western coast of Norway. Many rejected the concept outright because it would significantly increase CO2 emissions.

Bellona’s position was that if the power plant installed CCS from the start, then emissions would be small and tolerable. Unfortunately, this option was not subject to a proper public debate. The project developer rejected CCS due to its perceived technical immaturity and high cost. The center-right government resigned in March 2000 due to their general opposition to natural gas power plants.

The plans for natural gas power plants on land in Norway were later cancelled. But Bellona did not drop its campaign for CCS, instead it pivoted to focusing on how CCS can be applied to non-power plant industries with hard to abate emissions. The most prominent examples are cement, steel and chemicals. These will be needed even if all electric power production comes from renewable energy sources. Bellona’s experts in Brussels explain this in their analysis from 2018.

Being the first NGO to actively advocate for aggressive CCS deployment was just the start. The urgency of the climate crisis, for those who have carefully examined it, calls out for removal of excess CO2 from the atmosphere. Bellona published its first appeal for action to achieve net negative emissions in 2008.

This pivot also inspired Bellona to expand its CCS advocacy in Brussels by adding resources to reach out to a broad range of European stakeholders aiming to reduce their CO2 emissions, as well as building a dialogue to convince technology sceptics of the necessity of CCS.

One of hardest nuts to crack has been finding capital and funding for CCS projects. Bellona’s active contribution to the first attempt at the EU level culminated in the EU ETS funding mechanism called NER300. This process established the first formal mechanism of linking revenues from CO2 cap-and-trade auctions to supporting climate action projects. The number and types of project proposals to the first call for the NER300 were impressive. Although this first attempt to kick-start full-scale CCS projects with funding support from the EU ETS did not result in new full-scale projects, it provided valuable lessons for its follow-up, the EU Innovation Fund (EU IF).

The first call for full-scale projects received proposals for 311 projects across all technology categories. We estimate that more than 150 proposals of the 311 were for various types of CCS and CCU projects. The total amount of emissions reductions estimated by all 311 proposals was 1.2 Gigatonnes CO2 over their 10-year support periods. The total amount of funding applied for from the EU IF was 21.7 billion Euros. This is 21.7 times the total framework for this call, and 2.17 times larger than the anticipated framework for the 10-year support program as it currently stands for the EU IF.