BONN – José Alberto Garibaldi, advisor to the UK government on climate change, said at a side event to the Climate Conference 08 (CC8) arranged by Bellona in Bonn on June 7th, that he had heard ideas discussed at the CC8 event that he seldom hears. 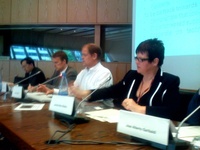 “Descriptions by leaders of how they got their countries to decouple greenhouse gas emissions from economic growth, and proposals to take account of domestic action in international climate negotiations were some of the things that were discussed at the CC8 conference but that I seldom hear,” he said.

“The CC8 conference really managed to convey that technological solutions exist and that all of us need to contribute to meeting the climate change challenge,” she said.

Picking winners
Gunnar Eskeland, content director for the CC8 conference, laid out the key messages of an open letter from the conference. This were broadly endorsed by the discussants.

Karsten Sach, deputy director general for international co-operation at the German Ministry for the Environment agreed with the crucial importance of using a variety of tools to push and pull climate-related technologies.

“I question the view that we do not need to pick winners. CO2 capture and storage is one example where we know there is a great potential. We need to make technological choices, see if the technology works and review it after some time,” he told the audience.

Global auctioning of emission allowances
“Trust is one of the big problems we are facing in the climate negotiations, with developing countries arguing that developed countries have not done what they were meant to do” Norway’s chief negotiator Hanne Bjurstrøm said.

“There are many challenging proposals in your letter,” she continued, noting that discussions on the same topics were ongoing in Bonn. She thought much of it boiled down to a question of funding.

“Norway has proposed a new financial system with global auctioning post-2012 of a certain percentage of national emission allowances,” she explained. The revenue from this global auctioning would guarantee a predictable and reliable source of income for a multilateral fund that would be independent of annual state budgets.

Lu Xuedu, deputy director-general of the Office of Global Environmental Affairs in China’s Ministry of Science and Technology, was particularly satisfied with the many practical ideas that the CC8 recommendations included – in contrast to the international climate negotiations.

“There has been a lot of talk about technology transfer in the negotiations, but no progress on substance,” he said.

The entire side event was recorded and can be viewed from 9 June onhttp://unfccc.meta-fusion.com/kongresse/SB28/templ/ovw_page.php?id_kongressmain=48.