The break up of the Soviet Union offered numerous stomach churning options for adventurous tourists. A half a million dollars bought you a trip to the International Space Station, a money spinner for Russia’s declining space agency whose first passenger, American Dennis Tito, gave his cosmonaut hosts plenty to clean up in the way of regurgitated lunch in 2001.

Published on August 1, 2014 by Charles Digges 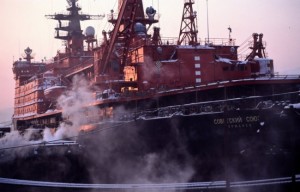 The break up of the Soviet Union offered numerous stomach churning options for adventurous tourists. A half a million dollars bought you a trip to the International Space Station, a money spinner for Russia’s declining space agency whose first passenger, American Dennis Tito, gave his cosmonaut hosts plenty to clean up in the way of regurgitated lunch in 2001.

Still other well-heeled tourists who didn’t wish to follow Yury Gagarin’s path retrace the steps of Roald Amundsen and discover the North Pole – from the comfort of a Russian Nuclear icebreaker – for $26,00 to $40,000 according to this year’s pricing from Polar Cruises.

This, too, results in its share of Technicolor yawns as the more timid-of-tummy battle sea sickness while the 50 Years Victory grinds over meter-thick ice at a constant bounce. But with a steep increase in environmentally dicey commercial traffic in the Arctic, facilitated by mandatory icebreaker accompaniment, the company no longer has to moonlight as a tour agency.

According to Polar Cruises and the Murmansk news portal Murman.ru (in Russian), the summer 2015 season will offer the last six North Pole icebreaker trips as the premier tour vessel, the 50 Years Victory, is assigned to escorting cargo.

Russia is keen to make the conditions of climate change and receding annual ice accumulation at the North Pole work in its favor to create a bustling sea highway along the northern Siberian coast. And by most accounts, it’s gaining.

Murman.ru reported that traffic along the Northern Sea Route – which offers a 5 to 7 day gain on the Suez Canal route to the Far East from the West – is “growing year by year,” and it will be all hands on deck for Russia’s Atomflot-based icebreaker fleet.

In 2013, as reported by the Barents Observer news portal, 71 vessels passed through the Northern Sea Route and bore some 1.35 million tons of cargo. Russia has high hopes that these figures will rise.

“We are counting on a four ton cargo load,”  Andrei Smirnov, deputy to the general director of Atomflot told the murman.ru portal. “In two or three years, when factories producing liquefied natural gas begin operations […] the cargo flow through the Northern Sea Route could grow to about 6.5 million tons – and when oil recovery projects begin in the Kara Sea and further east, the cargo flow through the route will be about 30 million tons.”

The navigation through the Northern Sea Route is as yet largely devoid of infrastructure for ships in distress – as already evidenced in September 2013 when the Nordvik cruiser, a ship with no ice class rating and a damaged hull, veered and remained off course for several days. The Nordvik non-ice class cruiser, which foundered at sea for several days along the Northern Sea Route until it was rescued by icebreakers. (Photo: Khatanga Commercial Port)

The infrastructure shortfall left would-be rescuers scratching their heads about how to prevent the vessel from spilling tons of diesel fuel into Arctic waters. After two weeks adrift, the Nordvik was finally guided to port when two nuclear icebreakers taking part in a vanity parade of the Russian Navy’s flagship battle cruiser, the Peter the Great,  across the Northern Sea Route were allowed to divert for the foundering vessel’s rescue.

That notwithstanding, the Northern Sea Route is expected to see more roiling shipping activity not only as ships cross from east to west and back again, but in connection with increased oil and mining activities.

Russia has long made a pet project of oil recovery in the Arctic, and actually achieved a 70,000 shipment of substandard crude, called ARCO, from its controversial, dilapidated Prirazlomnaya oil platform – the first of its kind in the Arctic – that it sold to France’s Total Oil.

Russia has plans to build at least three new “super-modern” universal use icebreakers at St. Petersburg’s Baltiisky shipyard, so called “Project 22220” which would boast the largest icebreakers in the world.

The first of these is the Arktika, which is scheduled to be service-ready by December 2017. At 173 meters in length and 34 meters in width, the prototype Arktika, or LK-60, will be the most powerful icebreaker ever built, able to sail through ice cover as deep as three meters.

The next two new generation icebreakers are expected to be delivered to Atomflot in 2019 and 2020.

Russia’s Unified Shipbuilding Corporation, which runs the Baltiisky Shipyard, won the uncontested $2.3 billion tender in May.

The Unified Shipbuilding Corporation has a recent history of lax safety measures, leading, since 2011, to three conflagrations aboard nuclear submarines at their shipyards.

“From a technical point of view, it is reasonable to have state of the art nuclear icebreakers operating in the Arctic,” said Nils Bøhmer, Bellona’s general director and nuclear physicist. “At the same time the past few years have seen a lot of accidents relative to nuclear vessel repair yards that constitute a large human risk factor, no matter how advanced the ships being serviced.”

Bøhmer said that Russia must devote equal focus to safe repair conditions as it is to boosting its nuclear icebreaker prowess.

“This needs to be a focus of the Unified Shipbuilding Corporation, which has shown itself to be lacking in a clear understanding and implementation of an effective safety culture,” he said.