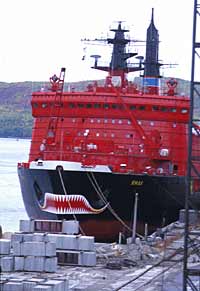 Nuclear-powered civilian vessels are federal property but are operated by the joint-stock Murmansk Shipping Company, or MSCo. All vessels are based at Atomflot, located two kilometres to the north of the city of Murmansk on the Kola Peninsula.

The purpose of the nuclear icebreakers, which have being built since 1959, was to contribute to the large-scale development and industrialisation of the northern regions of the Soviet Union, whereby the icebreakers would break through the ice to facilitate the passage of cargo ships. But with the collapse of the Soviet Union, the development of the Russian Arctic had slowed down, state financing of the civilian nuclear fleet shrunk, thus forcing MSCo to arrange tourist cruises onboard nuclear-powered ships to the North Pole.

The situation stabilised in late 1990s with the revival of Norilsk Nickel, one of the biggest exporters of raw materials in Russia, as well as the state granting some funding from the budget.

According to Aleksandr Medvedev, director general of MSCo, the federal budget has allotted $14.3m a year during the last two years. MSCo had to spend around $50m of their funds to keep the icebreakers afloat, however.

In 2003, MSCo was to receive the regular $14.3m and extra $7.6m for icebreakers to prolong the lifetime of their reactor installations. The final say from the government was, however, to cut all the subsidies and increase the tariffs for ships’ work in the Arctic.

But nuclear powered icebreakers are aging.

Icebreaker Arktika is undergoing repairs aimed at extending the lifetime of its nuclear installation up to 175,000 hours (prior practice suggested the lifetime of 100,000 hours). In theory the service time can be extended up to 200,000 hours, increasing the operation lifetime of the icebreaker from 25 years to 30-35 years. In February this year repairs were carried out on Vaigach icebreaker during which the nuclear installation’s steam generator was replaced. MSCo believes that the experience gained with Vaigach can be used to put Sibir back in operation, which had similar failure in its steam generator. But all these innovations will only help the icebreakers to operate in the Arctic until 2012-2015.

Commercial companies to fill the gap?
Russia is currently building one nuclear icebreaker at the Baltic shipyard in St Petersburg called the 50 Year Anniversary, meaning 50 years since the end of the WWII. The 50-year anniversary was back in 1995, but the icebreaker is still only 80% complete. The ship was laid down in 1989 and launched in 1993.

Last year, Russia’s Cabinet decided to divert the money, regularly spent on support to nuclear icebreakers fleet, to complete the 50 Year Anniversary. The governmental decree stipulates earmarking around $83m until the year 2005 — the year of ship’s commissioning. Norilsk Nickel Combine is also planning to allot $15m each year to commission the icebreaker in 2005.

To finance the operation of the nuclear icebreakers, MSCo has raised the cost of icebreaker services in the Arctic by a minimum of 50%. But even though Norilsk Nickel, the major customer of MSCo, has agreed to the new rates, MSCo fears that cargo shipping volumes will drop this year.

Norilsk Nickel also has the possibility to ship its cargo up the Yenisey River and further on land in summer time, or increase the shipment of rare metals by aircraft, unless, the company is forced to use the icebreakers by the government. The stated intention of Norilsk Nickel to start funding the completion of the 50 Year Anniversary also sounds surprising because only a couple of years ago Norilsk Nickel intended to convert nuclear-powered submarines, such as Typhoon class, into underwater transports in order to avoid using "expensive nuclear icebreakers." 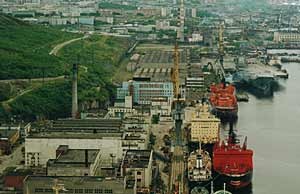 Atomflot enters limbo
But the operating cost of the nuclear icebreaker fleet is only a part of the story. Atomflot base — home base for the nuclear icebreakers located at the outskirts of Murmansk — is a standalone federal enterprise subjected to the Ministry of Transport, which cannot be owned by private companies. Atomflot gets its income by renting the pier plants to the icebreakers and their support fleet as well as carrying out maintenance and occasional repairs of these nuclear vessels. Atomflot also conducts refuelling of nuclear vessels and storage of solid and liquid radioactive waste. A storage pad for spent nuclear fuel casks is also being built on the territory of Atomflot. But these jobs are not sufficient to cover all the expenses. Atomflot started this year with salary arrears and other economic hardships.

The icebreakers need an infrastructure to operate properly and whatever company will run them also needs to keep Atomflot afloat. This will lead to additional expenses, which will apparently be mirrored in further raise of the costs for the services provided in the Arctic.

MSCo’s new management
Another factor, which contributes to MSCo’s instability, is the shift of management. The company, which was bought by the Russian oil giant Lukoil in 1998, is now being transferred to a company Sevmorput Kapital. The company is headed by Nikolay Kulikov, former director general of Lukoil Arktik Tanker, who left this position in September 2002 with 61% of MSCos stocks. Whether the new management will be interested in operating the fleet of nuclear icebreakers is yet unclear. There are talks of forming another company to operate the civilian nuclear fleet, although no decision has been made so far.

Still, it remains to be seen whether the raised cost for icebreaker services will sustain the civilian nuclear fleet without federal funding. Vyacheslav Ruksha, Deputy Minister of Transport, who used to sit in the chair of MSCo’s general director, says he is confident that the new prices will meet the icebreakers financial requirements. Pessimistic forecasts suggest that the coming years are going to be hard for the nuclear icebreaker fleet, however. And they will remain hard until the increase of the cargo shipment volumes in the Arctic, which will not come before 2007.