While the shipping sector remains one of the largest challenges for reducing transport emissions, an emerging transition towards battery electric and hybrid ships is taking place, with the Nordic countries taking the lead. 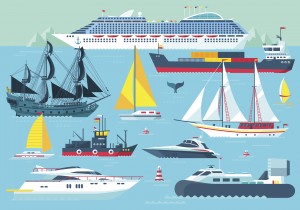 While the shipping sector remains one of the largest challenges for reducing transport emissions, an emerging transition towards battery electric and hybrid ships is taking place, with the Nordic countries taking the lead. Bellona is involved in many marine electrification success stories in Norway, such as tourist ship ‘Opal’ and tourist catamaran ‘Vision of the Fjords’, as well as the large roll-out of electric and hybrid transfer ferries connecting national and municipal roads in Norway.

Now, the company behind the successful hybrid catamaran ‘Vision of the Fjords’, announced a follow up in the form of a fully electric catamaran ‘Future of the Fjords‘. This new ferry, a symbol for green tourism, is set to become operational from late spring 2018 and like its predecessor, will have the capacity to carry up to 400 passengers. Although the upfront costs of building a fully electric ferry are 30-40% higher than for a conventional diesel version, the benefits in form of total cost of ownership and CO2 savings outnumber the costs by far.

Electrifying marine tourism offers a silent and emission-free journey through the fjords, while creating more green jobs on the west coast of Norway, which is historically very dependent on the petroleum industry. 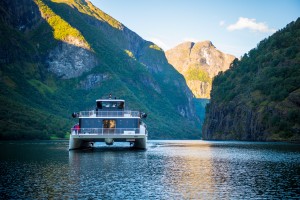 Norway is a popular destination for passenger cruises throughout the year, with its “untouched” nature and magnificent fjords. However, increased flows of tourism are having detrimental impacts on nature, resulting from exposure to growing emissions of NOx, SOx, and CO2.

As a result, many coastal cities suffer from growing hazards linked to local air pollution. A large cruise ship moored at shore can emit the equivalent amount of NOx and SOx as 13 000 cars. Although electric solutions are still a challenge for larger ships, shore side electricity is an effective solution towards mitigating local air pollution levels, and cutting CO2 emissions.

Recently, a large expansion of shore power in Norwegian harbours was announced with financial support from state authority Enova. The shore power in Oslo will mainly serve Stena Line and DFDS ferries so far. While this is a major step in the right direction, the larger cruise ships are still not targeted, as most are not equipped for shore side electricity.

Further north, Norwegian arctic express ‘Hurtigruten’ will soon be able to connect to shore power in several coastal cities, which is welcomed with a relief from the local populations. Bellona welcomes this positive development, which reaffirms key findings from a joint study by Bellona, Siemens, Nelfo and Elektroforeningen, advising on shore power expansion along the Norwegian coast. The key findings of the study show that the deployment of shore power can reduce NOx emissions by 7 000 tonnes per year, the equivalent of NOx emissions from more than half of all passenger cars in the country. Further, it can reduce CO2 emissions by 256 000 tonnes, the equivalent of 5% yearly emissions from passenger cars.

And the show goes on; Yara recently announced the development of an autonomous, electric container ship, the first of its kind. The main challenge is the heavy weight of batteries which would be required for such large vessels, but improvement of the design and lighter materials used for the ships allow it to bring larger battery packs on board, together with the technological improvement of batteries. An autonomous ship would also reduce its weight with no crew or supplies on board.

While a few decades ago, it would have been impossible to imagine such heavy vessels going electric, we can already see clear steps towards this transition today. Ships have a life spam of about 25-30 years, and when the moment comes to change the fleet, environment and innovation considerations should be main priorities.