A ruptured pipeline in Russia’s northwestern region of Komi has leaked 100 tons of oil last week, including nine tons that flowed into a local river, posing a threat the area’s ecosystems and populated areas, the state environment watchdog Rosprirodnadzor said on Monday. 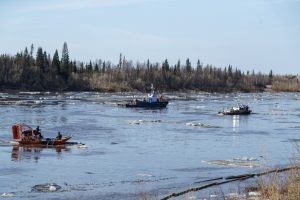 A ruptured pipeline in Russia’s northwestern region of Komi has leaked 100 tons of oil last week, including nine tons that flowed into a local river, posing a threat the area’s ecosystems and populated areas, the state environment watchdog Rosprirodnadzor said on Monday.

Local media report that the leak came from a pipeline that connects the Oshskoye oil field in the neighboring Nenets autonomous district to a nearby Lukoil storage facility. The oil has reached the Kolva river and traveled downstream to Usinsk, a town of 45,000 people located 2,000 kilometers northeast of Moscow.

Environmentalists and officials fear the slick could travel via tributary rivers and eventually reach the Barents Sea.

Lukoil said in a release that it has dispatched 150 workers to staunch the spill, though the Meduza independent Russian news site reports that as many as 230 liquidators have arrived to eliminate the slick.

Initial estimates said that the spill involved six to seven tons of fuel. But on Sunday, Lukoil’s subsidiary, Lukoil-Komi,  admitted that 90 tons of oil had spread into local soil and waterways.

“The leak occurred at a distance of about 300 meters from the coastline of the Kolva River,” the city administration of Usinsk, which declared an emergency last Wednesday,  said on its social media account. “Therefore, the bulk of the oil-derived liquid […] spread into the soil, mainly occupying a natural lowland close to the leak.”

While oil booms are usually used to contain oil spills on water, there is too much moving ice on the Kolva at this time of year to use that technique, officials said.

“The work to eliminate the consequences of the oil spill will be extremely difficult because of the ice drift in the river,” Komi Republic head Vladimir Uyba told the Independent Barents Observer.

Activists have feared that Lukoil is hiding the real magnitude of yet another disastrous oil spill in Russia’s Arctic. Locals had reportedly noticed dead fish in the river on May 10, before the accident was officially confirmed, according to a report in The Moscow Times.

Social media posts quoted by Meduza bore witness to the extent of the spill before its magnitude was officially acknowledged by Rosprirodnadzor.

In February, a court slapped Norilsk Nickel with a record-breaking fine over last year’s Arctic fuel oil spill that stunned environmental observers, ordering the industrial crown jewel to pay $2 billion in damages. The fine towered over those routinely handed out by Russian authorities. In 2020, for instance, the average environmental fine levied by regulatory agencies against polluters was only about $270.

The Komi Republic, which is rich in energy holdings, has seen enormous oil spills before. In 1994, the region’s aging pipeline network sprang a leak that was officially said to have totaled 79,000 tons, or 585,000 barrels. Independent estimates put the figure at up to 2 million barrels.

Some 10,000 oil leaks and spills take place in Russia every year due to aging infrastructure and other factors, Greenpeace’s Ivan Blokov told The Moscow Times. He added that the vast majority of these leaks go unreported due to a lack of proper environmental monitoring.