Russian prosecutors have ordered checks on infrastructure built on permafrost after a fuel tank collapsed in the Arctic, leading to a massive oil spill that many are blaming on climate change. 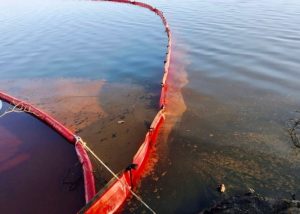 Oil booms on the Ambarnaya River. Credit: Rosmorrechflot via the Barents Observer

Russian prosecutors have ordered checks on infrastructure built on permafrost after a fuel tank collapsed in the Arctic, leading to a massive oil spill that many are blaming on climate change.

Russian President Vladimir Putin declared an emergency to tackle the spill, which sullied a river near the city of Norilsk, above the Arctic Circle, and leaked 20,000 tons before it was brought to the attention of local authorities by posts on social media.

The ruptured oil tank belongs to the Norilsk-Taimyr Energy Company, or NTEK, a subsidiary of Norilsk Nickel, the world’s largest nickel and palladium producer, which has a history of environmental violations it is spending billions to reverse.

The aim of the checks is to head off accidents like the one that struck Norilsk. Krasnov’s spokesman told Russian media that prosecutors would assess companies’ adherence to safety laws, environmental monitoring and measures to prevent emergencies.

That could prove to be a daunting task. Some 65 percent of Russia’s territory, mostly in Siberia, is comprised of permafrost – a pack of soil and ice that, until recently, has remained permanently frozen.

But now, the foundations underlying some of Russia’s most important industrial facilities and population centers are starting to shift. That’s because temperatures in Siberia have been climbing nearly twice as fast as elsewhere in the world thanks to climate change, according to figures from Russia’s federal weather agency, Rosgidromet.

The effects are could devastate the Russian economy. According to a 2018 Rosgirodmet report, the value of buildings and industrial infrastructure standing on foundations of Russian permafrost totals some $300 billion.

Among that infrastructure are more than 75,000 kilometers of oil pipelines stitched across Siberia, which the agency said could become vulnerable to ruptures as the frozen soil beneath them begins to retreat.

Also in that number are entire industrial mining, gas and oil centers – as well as the highways and railways that lead to them and towns that have sprung up around them. In Norilsk alone, said the agency, permafrost has retreated by 22 percent.

The newly unstable ground is already taking its toll. Over the past 10 years, said the report, more buildings in Norilsk have collapsed because of subsidence than in the previous 50.

After the Arctic oil spill came to light, Sergei Dyachenko, Nickel’s first vice president acknowledged to the official Tass newswire that such thawing was likely the culprit.

“We believe that something happened in the ground,” he said Thursday. “Perhaps it was thawing.”

It’s a good bet. Last year, the Arctic experienced its warmest winter on record. That has been followed in April and May by a heat wave, with May seeing temperatures between 3 degrees Celsius and 6 degrees Celsius above average since January.

Arctic melt only contributes to climate change. As permafrost thaws, it releases vast stores of carbon dioxide – the gas most responsible for global warming –then driving up temperatures even more.

The report states that, because of this melting process, the Arctic is now contributing some 1.1 billion to 2.2 billion metric tons of carbon dioxide annually to the world’s atmosphere. That’s equal to the yearly carbon contribution of countries like Japan, on the lower end, and Russia itself, on the higher end.