A Finnish environmental group has come up with a novel way of getting the notoriously climate-change denying US President Donald Trump to feel the pain of global warming: Melt his face. 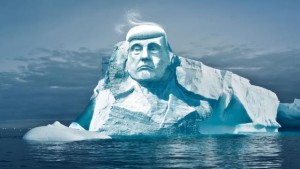 An environmental group wants to raise about $500,000 to carve President Trump's face in ice and prove that climate change exists. Credit: Melting Ice

A Finnish environmental group has come up with a novel way of getting the notoriously climate-change denying US President Donald Trump to feel the pain of global warming: Melt his face.

Not literally, of course. But the group, which is called Melting Ice, is looking to raise nearly $500,000 with the goal of carving a 35-meter likeness of Trump into a giant piece of ice, and then watching it slowly melt as an illustration to the US President and his followers that climate change is, in fact, real.

The crowdfunded project is called “Mount Trumpmore” – a nod to musings by Trump at a raucous Ohio rally last year that he would like to see his face among the US presidents depicted on Mount Rushmore, the famous mountainside stone carvings of Presidents Washington, Jefferson, Theodore Roosevelt and Lincoln in South Dakota.

But far from being a monument to Trump’s ego, the ice monument takes aim at his equally notorious belligerence toward science and rejection of all but alternative facts.

An enormous, slowly dripping sculpture of Trump’s visage, says Nicholas Prieto, chairman of the Melting Ice association, might help persuade the leader of the free world that the thing nearly everyone else in the world thinks is happening is happening.

“Global warming is one of the most important issues and topics of today,” Prieto said in a statement. “We want to build the monument for all of us, so we can see how long the sculpture lasts before melting. There are still people who ponder whether it’s a real issue. Often people only believe something when they see it with their own eyes.”

If it is successful in drumming up the funds, the group says it will install a camera at the site to livestream the sculpture as it eventually dissolves.

Even that might be a hard sell to Trump. Since rising disquietingly in American public life from New York real-estate hustler and reality TV star to the White House, Trump has repeatedly rejected the existence of man-made climate change, calling it, without evidence, a “hoax” devised by China as a broadside to American manufacturing.

He has likewise appointed Scott Pruitt as head of the Environmental Protection Agency, another climate change denier who, before coming to Washington, spent his career suing the agency on behalf of the very industries he was appointed to regulate.

In the past several weeks, Pruitt has been mired in ethical scandals for spending public funds on lavish travel, private bodyguards, souped up government limousines, cosseting lobbyists and installing a soundproof phone booth in his office. He has still not been fired.

The world has already warmed about 1.1 degrees Celsius since the Industrial Revolution. The overwhelming majority of scientists say the burning of coal, oil and gas is causing the Earth’s climate to change because of heat-trapping gases.

While these rising temperatures will – if Melting Ice’s project is successful –deliquesce Trump’s frozen bust, reversing the disastrous impact of his irresponsible policies will take considerably longer.