An environmental effort to head of a ship laden with the first commercial oil drilled by Russia in the Arctic from docking in Rotterdam was put down by Dutch police, who boarded and arrested the crew of Greenpeace’s Rainbow Warrior last week. 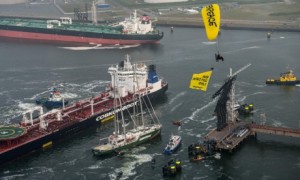 An environmental effort to head of a ship laden with the first commercial oil drilled by Russia in the Arctic from docking in Rotterdam was put down by Dutch police, who boarded and arrested the crew of Greenpeace’s Rainbow Warrior last week.

Seven of the 44 activists who were aboard the Rainbow Warrior had also been among the 30 held for more than three months awaiting trial on charges of piracy – later reduced to hooliganism – in Russia last year. They were eventually set free by an amnesty handed down by Russian President Vladimir Putin in the lead up to the Sochi Winter Olympics.

The so-called “Arctic 30” from aboard Greenpeace’s Arctic Sunrise vessel had tried to hang anti-Artic drilling slogans on the Gazprom-owned Prirazlomnoye platform – the first platform to drill in the fragile Arctic ecosystem – from where the oil activists attempted to block of Holland’s coast was drilled.

They were fiercely countermanded by the Russian Coast Guard, which sent armed security officers abseiling onto its deck, towing the boat in. Local courts sent the Arctic Sunrise crew to pretrial jails in the Murmansk area.

According to reports on the most recent protest, 10 armed Dutch anti-terror police boarded the Rainbow Warrior and arrested the activists.

The action to stop the Russian tanker, the Mikhail Ulyanov included activists in paragliders, ones with climbing equipment, a flotilla of rubber rafts and was said by Greenpeace activists to have not been coordinated, thought the paper said the Rainbow Warrior and rafts were trailed by a boat packed with the press.

The Port of Rotterdam had also been given advance notice of the protest, Greenpeace told the Guardian.

Greenpeace said the rubber rafts launched from the Rainbow Warrior successfully blocked the passage of the Russian ship. But Dutch police later told the BBC it was still able to moor in Rotterdam harbor. It offloaded its shipment over the weekend.

The 44 activists from Greenpeace vessel were taken to several different police stations throughout Rotterdam and released within hours, according to a report in the Guardian. The Rainbow Warrior was towed to port.

In all, some 80 activists participated in the sea protest, the BBC said.

The protesters painted “no Arctic oil” in large letters on the hull of the Mikhail Ulyanov tanker, reports said. Police told the AFP news agency that several activists also climbed a fence to try to prevent the ship from docking. The Mikail Ulanov set sail from the controversial Prirazlomnoye platform on April 18, carrying 550,000 barrels of a substandard crude called ARCO, bound for a European customer that Gazprom at the time refused to disclose.

An unknown within French energy giant Total later told the AFP anonymously that Total was the specified customer. Total’s CEO Christophe de Margerie said in 2012 his company would never drill the Arctic because the environmental risks were to great.

The revelation that Total was receiving the ARCO oil from Prirazlomnaya drew withering charges of hypocrisy from Ben Ayliffe, a Greenpeace International Arctic campaigner. The anonymous source protested, however, that Total was still sticking to its principles by not drilling in the Arctic itself.

Bellona’s senior Arctic advisor, Sigurd Egne, said the Gazprom-dubbed-ARCO fuel posed more of an environmental danger in the event of a spill.

He noted that the EU had little power over influencing who drilled in the Arctic. But he did say that the EU can influence its spread in Europe by levying heavy-taxes on Arctic-origin oil with an eye to making it prohibitively expensive.

Greenpeace’s Ayliffe was quick to point out the difference in the way the protesters were handled by the Dutch than they were by the Russians,” he told the newspaper.  “It tells us more about how the authorities deal with dissent in Holland compared to Russia. We had every intention of stopping the oil being offloaded. The intention was just as serious as it was in Russia last September.”

Greenpeace, Bellona, and numerous other environmental groups opposed offshore drilling in the Arctic. Both groups have environmental group has heavily criticized international companies like Shell, BP and Statoil for teaming up with Gazprom and Russian state oil company Rosneft to pursue Arctic drilling efforts.

Greenpeace’s Arctic Sunrise is still in the custody of the Russian Coastguard.