Environmentalists go for second round with Gazprom, vowing to intercept Arctic oil tank bound for Europe

Oil drawn last week from Russia’s first offshore Arctic oil drilling platform looks to be headed for environmental clashes as it reaches the Dutch port of Rotterdam, as Greenpeace promised yesterday to launch a ship to protest its arrival. 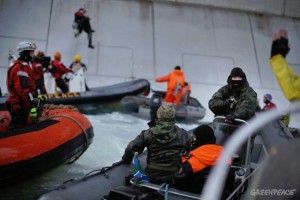 Oil drawn last week from Russia’s first offshore Arctic oil drilling platform looks to be headed for environmental clashes as it reaches the Dutch port of Rotterdam, as Greenpeace promised yesterday to launch a ship to protest its arrival.

The environmental group said Monday it has sent the “Rainbow Warrior III” to meet the Mikhail Ulyanov, a tanker chartered by Russia’s state-controlled gas company Gazprom’s oil division. It is expected that the Greenpeace ship and its crew of 23 could intercept the Russian tanker as early as Tuesday evening, Agency France-Pressed reported.

Gazprom owns the controversial Prirazlomnaya oil platform, the first in Arctic waters to produce oil – though its first batch is somewhat substandard, drawing many oil analysts to conclude that last week’s parcel from Prirazlomnaya was mean to sent a political message regarding Russia’s oil supremacy in the high north. President Vladimir Putin was piped in via television link to congratulate the platform’s crew on its first production.

Greenpeace spokesman Ben Ayliffe had no comment on what kind of protest is planned, telling the Associated Press only that, “The tanker is currently heading south into the North Sea as it makes for Rotterdam, so we expect the two ships to meet at some stage in the coming days.”

Bellona’s Sigurd Enge, a senior advisor on Arctic affairs, questioned why the oil drilled by the Prirazlomnaya last week is even finding demand in Europe.

Last week, Gazprom sought to keep the European customer under wraps. But AFP revealed Monday that the buyer was the French energy giant Total.

This drew further ire among environmentalists, as Total’s CEO Christophe de Margerie in 2012 had vigorously underscored that his company would not seek to tap Arctic oil sources because it was too risky to the environment.

Total’s 2012 announcement prompted several other oil majors to reassess their own Arctic drilling plans, namely Shell and ConocoPhillips, who have put their Alaskan coastal projects on hold until safety issues can be resolved.

Greenpeace’s Ayliffe said Total was being hypocritical by buying oil drilled in the Arctic by Gazpromneft.

Total did not immediately return requests for comment from Bellona. But an unnamed spokesman did confirm Total’s purchase of the oil to AFP and tried to deflect charges of backtracking on the company’s earlier stand by saying Gazprom would be doing the Arctic drilling.

By Gazprom’s own admission, the crude that was loaded onto the company-leased Mikhail Ulyanov tanker last week is below the quality of Russia’s main export from the Ural mountains, and will sell for cheaper. The natural gas monopoly’s oil wing Gazpromneft, nonetheless tried to make the most of the poor quality by branding it ARCO. But Enge also pointed out that ARCO is more dangerous to the environment than higher quality exports.

In addition to protests, Europe has what Enge said are other very effective weapons at its disposal.

“The EU is very concerned about drilling in the artic but is has no real power to stop it, accept for market forces to diminish its import,” said Enge. “The question is, then, if the EU is worried about possible oil accidents in the Arctic, why are they not curtailing those chances by refusing to buy it?”

“The environmental dangers a ripe opportunity for the EU and other potential customers of this substandard oil to levy prohibitive taxes on it, and make it less popular on the market,” he said.

Where will the protests lead?

The planned action, whatever form it takes, will represent the second clash Greenpeace has had with Gazprom in less than a year, which has the potential of developing into an international conflagration.

Willem Wiskerke, another Greenpeace campaigner, told AFP: “We do not disclose in advance what we are going to do, but I can assure you we will send a clear message to the world that this oil is very dangerous.”

In mid September, 28 activists from Greenpeace and two freelance photographers were arrested by the Russian Coast Guard and charged with piracy after two of the activists attempted to scale the Prirazlomnaya platform and adorn it with anti-Arctic drilling banners from their ship, the Arctic Sunrise. Piracy carries with it a 12-year prison sentence in Russia.

Several months of court hearings for the activists, representing 18 different nationalities – and causing logistical headaches and language barriers –  wended their way through courtrooms in Murmansk and St. Petersburg while the activists remained in remand prisons. The charges were eventually reduced to “hooliganism” – still a heavy charge in Russia.

In December, the “Arctic 30” as the arrested activists came to be known, were suddenly set free by a vague amnesty that freed several political prisoners, including ex-Yukos head Mikhail Khodorkovsky and the controversial members of the Pussy Riot punk rock collective, Maria Alyokhina and Nadya Tolokonnikova.

Tolokonnikova immediately dismissed the amnesties as a cynical and “cosmetic” effort by Putin to powder over some of Russia’s human rights abuses – and to distract from other ongoing ones – prior to the Sochi Winter Olympic games in February.

The Arctic is too fragile

Environmental groups worldwide, including Bellona and Greenpeace, fiercely oppose oil production in the Arctic because the possibility of spills in such rugged territory would be nearly impossible to clean up.

Gazprom further refuses to publicly disclose what its spill contingencies are, suggesting that it has none.

Environmental groups also worry that adding more oil to the world market from the Arctic, which is estimated to hold in the tens of trillions of cubic meters of gas and oil, will reinforce worldwide addiction to fossil fuel and scuttle efforts toward pursuing renewable and climate friendly energy options – the vast majority of which are deployable.

In a statement Sunday, Greenpeace underscored yet another, but more political reason for the world to turn its back on Russian oil, saying that buying it “increases our dependence on Russian energy firms and only serves to strengthen President Putin’s hand in the geopolitical game he’s playing.”