Electrifying the European ferry fleet will reduce emissions with 50 %.

Published on September 22, 2022 by Signy Fardal 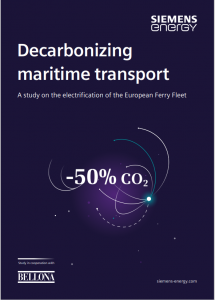 With small and large ferries playing an important role in European transport, electrification of such traffic is becoming an effective and readily available solution for reducing carbon emissions. Bellona estimates that nearly 50 % of ferry emissions can be cut by investments in standard technology such as shore power, hybridization, and electrical systems.

A report from Bellona Foundation and Siemens Energy shows that up to 800,000 tons of CO2 -emissions can be reduced by electrification of the European Ferry Fleet. These emissions typically happening in port and within the first hour of travel. The other half of the emissions, linked to longer voyages, can be tackled by substitution with low and zero emission fuels such as hydrogen, ammonia, biofuels, or carbon capture

Ferry operations in Europe are concentrated in several key locations. The four countries analyzed including Germany, Greece, Italy, and the UK – all having extensive ferry activity and accounting for 35% of European ferry emissions. And the largest ferry country in Europe, Norway is adding another 17%, although Norway is already well on the path to electrification with more than 70 zero emission ferries currently in operation or under construction.

–These emissions belong to the politicians and society at large and are perfectly suited to reduce Europe’s dependence on oil and one step closer to its own ambitions to reduce emissions by50 % by 2030. And for the rest of the emissions, we have other solutions such as hydrogen, ammonia, further technology development and energy efficiency, says Sigurd Enge, manager Shipping, Marine and Arctic Issues in Bellona.