Bellona at the first “États Généraux de l’Air” of Brussels

On Saturday 27th of April, Bellona Europa director Jonas Helseth contributed to a roundtable discussion on the air quality of the city of Brussels. 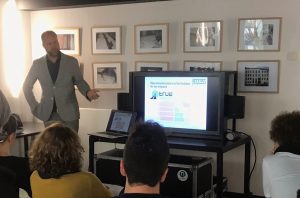 On Saturday 27th of April, Bellona Europa director Jonas Helseth contributed to a roundtable discussion on the air quality in the city of Brussels. This discussion happened within the context of a 3-day event on the ‘General State of the Air in Brussels’, organised by the Vrije Universiteit Brussel (VUB) and BRAL, a think-tank working on a multitude of issues including air pollution, prolonging a good collaboration between Bellona and the Brussels-based organisation. Other organisations involved include Filter Café Filtré and Bruxsel’AIR.

The roundtable discussion related to the Dieselgate scandal, which continues to affect citizens, 4 years later, without many signs of slowing down. The panel was shared with Margherita Tolotto from the European Environmental Bureau (EEB). The roundtable emphasised the harmful air quality in Brussels and the critical role that citizens can play in both gathering data and reducing their impact on air pollution, while also underlining the lack of government action in implementing solutions. Given the EU is likely to fine Belgium for missing its air pollution caps, one key question was addressed to the Environment Minister of the Brussels Region, who would pay this fine, the carmakers or the taxpayer? Tolotto mentioned that the city government has used Dieselgate as an excuse for exceeding NOx limits, however, in a letter of formal notice the European Commission made it clear that this was not an acceptable excuse for missing air pollution targets.

Much of the discussion remained on how to improve the quality and quantity of data on air pollution. Nonetheless, Bellona believes we already have insurmountable evidence that air pollution in Brussels must be curbed as quickly as possible. Scientific certainty on the effects of air pollution is very high. Similarly to climate change, we have enough information at our disposal to know that the time to act is now. Indeed, a EU study finds that air pollution from transport alone is responsible for €600 billion in health costs due to air pollution. If the health costs were to be included in the price of a fossil-fuel powered car, the sale price of an average car in Europe would almost double. 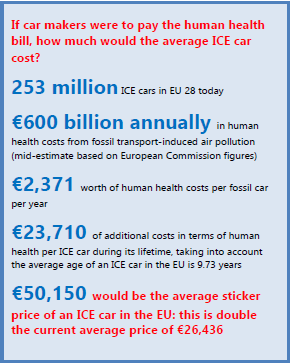 Bellona Europa’s director, Jonas Helseth, made clear links between the tobacco industry’s infamous campaigns to promote smoking with the car industry’s dismissal of air pollution concerns, culminating with the Dieselgate scandal. This call was echoed by the WHO head. Helseth criticised the Brussels government for failing to act, a criticism which was also shared by the Greens (Écolo) in the panel, who had done their own measurements demonstrating that NOx pollution is much worse than the official data published by the Government. Another NGO, ClientEarth performed the same study, with similar results.

Helseth also warned of a potential ‘Dieselgate 2.0’ involving the promotion of so-called ‘e-diesel’ as a replacement to conventional fossil fuels. However, the benefits of ‘e-diesel’, known variously as ‘renewable diesel’, ‘electrofuels’, or ‘synthetic fuels’ are highly dubious since it requires very strict sustainability criteria to be zero-emission. The multiple steps involved in producing these fuels cleanly, which are extremely inefficient and costly, therefore do not make them a viable alternative to fossil fuels, especially in the presence of existing and affordable zero-emission solutions such as direct electrification and hydrogen.

Bellona would like to thank BRAL and MobileReporter for inviting us to contribute to this event and organising this much-needed discussion.

Here are Bellona’s reports on:
Internalising the health costs of transport
Synthetic fuels