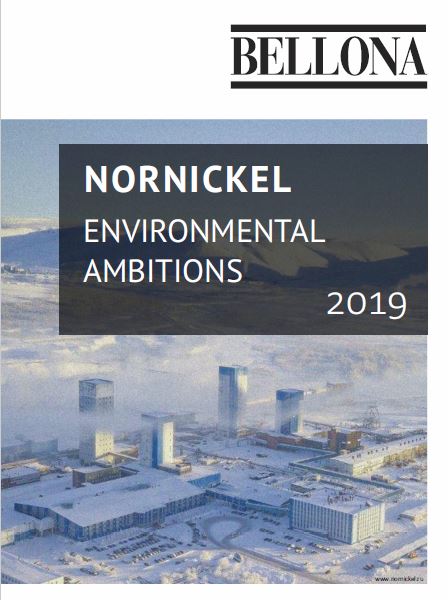 Norilsk Nickel, also known as Nornickel is a world-leading producer of nickel, palladium and other metals. It has its key company assets in the Russian Arctic, on the Taymyr and Kola Peninsula. On the Kola Peninsula, company assets are operated by a subsidiary known as Kola Mining and Metallurgical Company (Kola MMC).

Any mining and metallurgical production, including that of Nornickel, has an environmental impact.

In  recent  years  Nornickel  has  been more  firmly  announcing  its  environmental  concerns.  The main  focus  of the company’s  environmental  policy  entails  gradual  reduction  of  air  pollutant  emissions and wastewater discharges.

The present report aims to show recent achievements and plans related to the environmental impact of company’s activity, as well as where the public lacks information about the company’s future plans.  This report discusses Nornickel’s progress in emissions reduction and other measures aimed to strengthen the environmental component of industrial processes. The report also covers the legal framework that regulates emissions in Russia, thus providing context to the current emission goals of Nornickel.

Moreover, an example of a roadmap is proposed, which could make it possible to follow the company’s efforts aimed to reduce its negative environmental impact, if implemented by the company itself.

In light of the current situation, the tendencies towards Nornickel’s transparency and establishing public relations are identified.

In short, Nornickel has started down a long path towards decoupling the production of valuable metals from emissions and discharges that harm the surrounding environment. They still have a long way to go, and how they will reach their current goals remains unclear to Bellona. It is also at the current time unclear whether they see the current goals as the end of their efforts, or if this is but the first step towards even further reductions of emissions from their production facilities.

Bellona deems that this report can be helpful for the company, to understand which choices they could make to improve their efforts. The report should also be worth reading for anyone interested in following the current workings of one of the biggest producers of nickel in the world.

Addition:
Just as this report was published in October 2019, Vladimir Potanin, the President of Nornickel, confirmed that the company is looking to close the smelter in Nikel town near the Russian-Norwegian border. So far, we have little information as to when this will happen, and what the company’s plan is for decommissioning the smelter and replacing or potentially moving the production capacity to another location, and what this might entail for the environmental impact of Nornickel’s operations on the Kola Peninsula and in general.