Factsheet: Taking the Electric Revolution to the Seas

Bellona Europa highlights some major accomplishments in the electrification of the marine transport fleet in its new factsheet. Drawing on Norwegian best practices, the factsheet explores what are the solutions and possible first steps to facilitate this transition, moreover that it is very much real and happening in many parts of the world.

A quiet revolution is taking place. Some sailing boats, pleasure crafts, ferries and even large ships are scuttling their diesel engines and going for battery electric drive. The electric revolution is moving to the seas! Battery electric ships will mean no CO2 emissions, no air pollution and a smoother journey for passengers. The advanced battery technology, improved performance and growing shore power infrastructure are revolutionising the way ships are powered.

Electrifying sea transport starts on shore with “shore-side electricity supply”. Shore power in simple terms, allows ships to turn off polluting engines while at berth and instead connect to an electricity supply. As around 90% of the ports in Europe are located in major cities, ships with engines on in port areas brings large air pollution sources directly to population centres. In addition to drastically cutting local damaging air pollution and CO2 emissions, shore power also helps avoid noise and vibrations from ships which otherwise pose significant disturbance to harbour city life quality.

On a whole Europe is lagging. Deployment of shore power is mandated in various parts of the US and Asia. Yet still, cities such as highly polluted London have avoided shore power for a new inner-city cruise ship port development8. If European countries continue to drag their heels with shore power, not only will city residents face health impacts of air pollution but the European shipping sector will not be able to capitalise on its lead in battery hybrid ship propulsion. European ship yards can ill afford to be left out of the battery electric shipping revolution.

Car and passenger ferries on the Norwegian fjords are turning to silent batter electric drives. The first electric ferry ‘Ampere’ was commissioned only 2,5 years ago, now more than 30 new-built electric and hybrid-electric ferries are being commissioned for operation on the Norwegian coast. It’s not surprising that electric drive is becoming the norm, a joint Bellona-Siemens study showed that 7 out of 10 ferries in Norway would see significant cost savings with full electrification.

Both large ships can be powered 100% by on board batteries, avoiding the need to use polluting engines near shore when coming to and leaving port. Deploying advanced technology in the real world is moving the bar for environmental and stewardship standers in northern waters. Together with Bellona, ‘Hurtigruten’ now advocate for all ships to turn off their engines while sailing in and out of harbour cities, ban the use of heavy fuel oil and making it obligatory to connect to shore power.

Shipping is one of the fastest growing sources of CO2 emissions, currently responsible for about 2.5% of global emissions. Like aviation, international shipping emissions are excluded from the Paris Climate Agreement, and are inadequately addressed under existing UN conventions and EU legislation. The European Commission forecasts that EU-related ship CO2 emissions will increase by between 50% and 250% by 2050, compared to 1990 levels1. This calls for urgent measures to be introduced at European and global level to cut shipping emissions if we are to halt global temperature rise below 2°C. In addition to its heavy carbon footprint, shipping is also a major source of local air pollution in Europe. By 2020, it could produce more nitrogen oxides (NOx) than all land-based sources of emissions combined. In harbour cities, ship emissions have become a dominant source of pollution in particular when considering fine particulate matter (PM) emissions2. With increasing global trade and transport, the emissions from shipping and maritime transport, should no longer be overlooked. 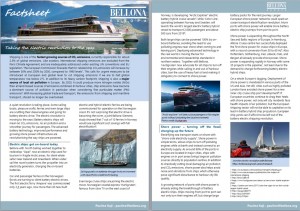