The development and deployment of CCS technologies in Europe is imperative should Europe utilise its largest indigenous energy source. 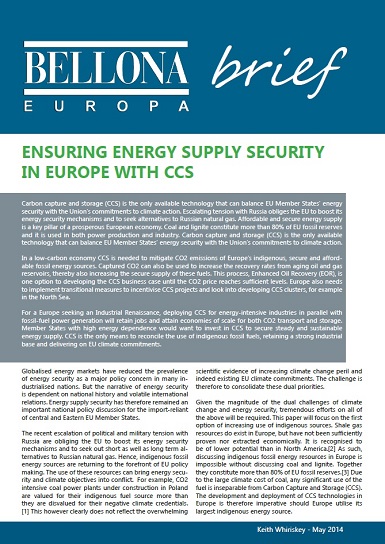 Globalised energy markets have reduced the prevalence of energy security as a major policy concern in many industrialised nations. But the narrative of energy security is dependent on national history and volatile international relations. Energy supply security has therefore remained an important national policy discussion for the import-reliant of central and Eastern EU Member States.

The recent escalation of political and military tension with Russia are obliging the EU to boost its energy security mechanisms and to seek out short as well as long term alternatives to Russian natural gas. Hence, indigenous fossil energy sources are returning to the forefront of EU policy making. The use of these resources can bring energy security and climate objectives into conflict.  For example, CO2 intensive coal power plants under construction in Poland are valued for their indigenous fuel source more than they are disvalued for their negative climate credentials.[1] This however clearly does not reflect the overwhelming scientific evidence of increasing climate change peril and indeed existing EU climate commitments. The challenge is therefore to consolidate these dual priorities.

Given the magnitude of the dual challenges of climate change and energy security, tremendous efforts on all of the above will be required. This paper will focus on the first option of increasing use of indigenous sources. Shale gas resources do exist in Europe, but have not been sufficiently proven nor extracted economically. It is recognised to be of lower potential than in North America.[2] As such, discussing indigenous fossil energy resources in Europe is impossible without discussing coal and lignite. Together they constitute more than 80% of EU fossil reserves.[3] Due to the large climate cost of coal, any significant use of the fuel is inseparable from Carbon Capture and Storage (CCS). The development and deployment of CCS technologies in Europe is therefore imperative should Europe utilise its largest indigenous energy source.

– Jerzy Buzek, former Prime Minister of Poland and President of the European Parliament

The EU dependency on Russian gas imports is set to increase in the long run. This is a consequence both of environmental policies which favour less carbon-intensive gas over coal and of the existing pipeline network. All other things being equal, the EU’s use of gas is expected to rise from 327 billion cubic metres (bcm) in 2012 to 413 bcm in 2020. This is primarily due to Germany’s retirement of base load nuclear power[4], but will also be felt across other Member States.

This projection has affected wider European energy and climate policy. The climate inaction of countries such as Poland is rationalised in the face of both energy supply security and to some extent a craving for energy independence. The EU’s 2030 energy and climate package stresses the advantages of renewables in reducing energy import dependence, but such gains will not be observed until after 2030.[5]

As experienced in Germany, a substantial increase in renewable penetration does not immediately remove the need for fossil fuelled thermal generation. Thermal is still required to both meet energy demands and to remain available as backup to intermittent renewable generation. In Germany this role is played primarily by aging coal fired power stations utilising indigenous lignite. This is neither environmentally nor commercially sustainable. As the price of EUAs rise from their current historic low, coal will become uncompetitive relative to existing and presently underutilised Combined Cycle Gas Turbines (CCGT). The fuel needs of CCGT will be met almost entirely through import from outside the EU. In this way, without flanking measures, the transition to renewables may risk increasing the import dependence of European electricity supply for a prolonged period.

Long term energy policy focusing on more renewable sources, greater energy efficiency, nuclear power, shale gas and the interconnection of the energy grids can also play a role in reducing Europe’s dependence on Russian gas.[6] Nuclear energy, apart from the controversy it causes in several EU Member States, is also subject to increasing cost as those experienced in Olkiluoto, Finland.[7] The use of CCS with indigenous fuels will therefore need to play a very large role in reaching this goal.  The potential role of CCS is amplified when Member States with the largest coal reserves are also those most vulnerable to Russian gas supply risk.

Known EU coal and lignite reserves are large enough to last approximately 130 years. Unknown potential resources would further extend this. Indigenous European coal and lignite is subject to lower price volatility and supply risk than imported natural gas. Importing coal could also provide more security that importing gas. This is because coal is sourced from a competitive international market that is free from cartels and thereby limited in arbitrary threats to supply security. Central and Eastern EU Member States currently have the highest reliance on coal to generate electricity. Poland sources 88% of its electricity from coal. These same countries are also those most exposed to potential supply disruptions of Russian natural gas.

CCS is the only means to reconcile coal and climate

CCS consists of three stages. First, capture of carbon dioxide (CO2) from power plants or CO2 intensive industries. Second, transportation of CO2 via pipeline or ship to a selected storage site. Third, CO2 injection into a suitable underground geological formation for the purpose of permanent storage. All three stages are being undertaken successfully in various capacities across the globe.

A modern coal fired power plant fitted with CCS can supply predictable and reliable electricity with 90% reduced CO2 emissions. The application of CCS technologies also has positive effects on the reduction of other pollutants from coal use. Direct SO2 emissions tend to decrease substantially as its removal is a technical requirement of CO2 capture.[9]

CCS can increase the supply of indigenous hydrocarbon fuels

Captured CO2 from thermal power plants or industrial facilities can be used to increase the recovery of hydrocarbons from aging reservoirs. This process is called Enhanced Oil Recovery (EOR).[10] Use of CO2 to increase oil recovery may also liberate natural gas that would otherwise be injected to maintain reservoir pressure. In this way CO2 EOR can further improve EU security of energy supply by increasing the effective indigenous production of European oil and natural gas. This is the key motivation for an industry CCS project currently under construction in the UAE.[11]

Approximately 114 commercial CO2 EOR projects are active in the United States, injecting over 2 billion cubic feet of CO2 and producing over 280,000 ‘extra’ Barrels of Oil Per Day (BOPD).[12]  It is estimated that CO2 EOR projects in key oil fields could contribute 15% of all UK oil production by 2030, potentially generating up to £2.7bn in extra economic output.[13] There is significant potential for CO2 EOR in the wider North Sea basin as well as in e.g. Romania and Ukraine.[14] [15] [16]

A European Commission report assessing energy supply security in Europe is expected in June 2014. Action at EU level is aimed at guaranteeing security, market functioning, interconnection and emission reduction. CCS is necessary if Europe is to avoid compromising on either of these central tenets. For European climate goals to be met, policies must address both the need for CO2 reductions while reassuring Member States that policies will not exacerbate energy import reliance.

A continued lack of effective EU and Member State policy to facilitate the deployment of CCS technologies will lead to increasing policy conflicts between energy supply security and climate change mitigation.

For a Europe seeking an Industrial Renaissance[17] there is the additional challenge of securing jobs and competitiveness. In 2012 130 million tonnes of hard coal and over 430 million tonnes of lignite were mined across the EU. This activity directly employed more than 240,000 people. Moreover, CCS is the only way to reconcile the goals of strengthening EU energy-intensive industries while significantly reducing their emissions[18]. CCS will therefore be necessary to secure and create jobs and to retain the competitive advantages of using indigenous and stable energy. If carbon capture technologies or CO2 storage capacity is not available to Member States, the ability to use Europe’s most abundant fossil energy source, as well as to succeed in sparking an EU Industrial Renaissance, will be precluded for policy makers.

In this capacity the EU has the cause and the means to progress CCS technology development. Opportunities to do so are found in the 2030 climate and energy framework, ETS reform, and the upcoming CCS directive review.