During the first two trading periods of the European Union Emission Trading Scheme (EU ETS) we have observed a low and volatile Emission Unit Allowance (EUA) price, which has failed to incentivise sufficient abatement efforts and investments in clean technologies. Bellona’s views on the European Commission-proposed Market Stability Reserve and on the way forward are outlined in the brief on ‘Comprehensive ETS Reform’. 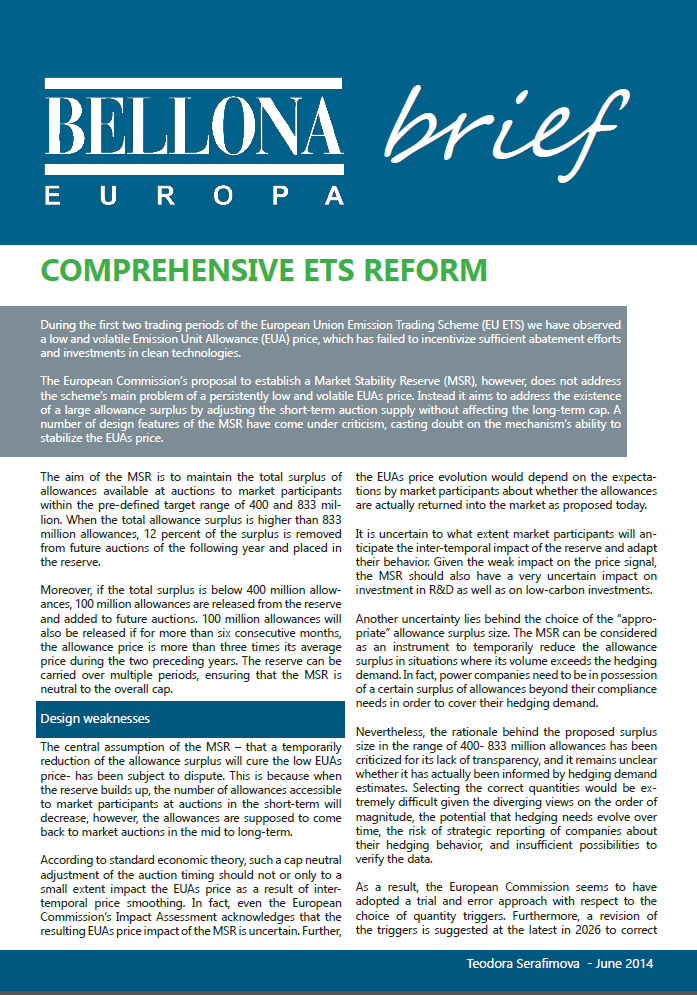 The European Commission’s proposal to establish a Market Stability Reserve (MSR) does not address the scheme’s main problem of a persistently low and volatile EUAs price. Instead it aims to address the existence of a large allowance surplus by adjusting the short-term auction supply without affecting the long-term cap. A number of design features of the MSR have come under criticism, casting doubt on the mechanism’s ability to stabilise the EUAs price.

Bellona is strongly concerned about these uncertainties and subsequently doubts the ability of the MSR to cure the EUAs price and ensure a well-functioning ETS. A central element of Bellona’s position is the necessity of creating a discretionary price-based adjustment mechanism into the ETS to adjust the overall supply of EUAs available at auctions in the market. To ensure that these adjustments have the desired impact on the EUA’s price, Bellona advocates for the permanent cancellation of allowances in cases where the EUA’s price is below a certain threshold as opposed to their temporary deposition in a reserve. This adjustment mechanism is to be regulated by an independent bank; the European Central Bank of Carbon.

Moreover, Bellona sees the setting of a price collar, i.e. price floor and price ceiling, as a direct and immediate means to increase the current EUA price. A price collar would incentivise investment in low-carbon technologies and reduce price uncertainty. Imposing a maximum price would also address concerns of a too high carbon price which in turn would remove EU competitiveness concerns and those of carbon leakage. Bellona also sees great value in expanding the ETS to additional sectors, in particular the buildings and transport sector in order to allow for Member States to take advantage of least-cost options for reducing their emissions.