BellonaBrief: The Emission Testing Gap – Why business as usual for the conventional car industry cannot continue

The recent revelations concerning Volkswagen (VW) having equipped around 11 million of its vehicles with defeat devices to allow its fleet to produce artificially low NOx emission results when the test is conducted triggered a broader investigation into the entire car maker industry. This in turn confirmed Bellona’s long-held assumptions about fraudulent practices and test manipulations being commonplace across the entire car industry. Not only are further car makers being added to the list of cheaters, but the practice has been found to also affect CO2 emissions: the greenhouse gas around which the UN climate negotiations will be revolving at the Paris COP 21 conference next month. 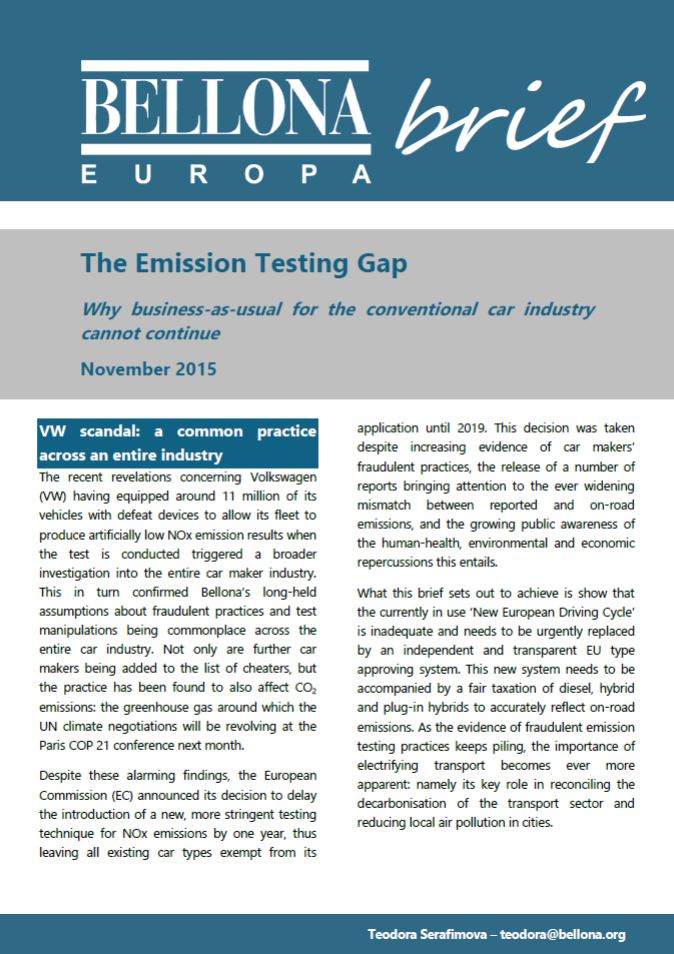 In addition to the increasing evidence of car makers manipulating emission test results, a number of recent reports, including those by Transport & Environment and the ICCT, have brought attention to the ever increasing mismatch between reported and on-road emissions, and the economic, environmental and most of all human health-repercussions these have entailed. While cheating practices have helped car makers achieve significant cost savings, amounting to roughly €7 billion, from complying with EU regulations, the associated costs incurred by society will be detrimental, in the form of deadly air pollution levels and human lives at stake.

In fact, a recent study has found that more than 3 million people a year are killed prematurely by outdoor air pollution – more than malaria and HIV/AIDS combined. Despite these alarming findings, the European Commission announced its decision to delay the introduction of a new, more stringent testing technique for NOx emissions by one year, thus leaving all existing car types exempt from its application until 2019.

What this brief shows is that the currently-in-use ‘New European Driving Cycle’ is inadequate and urgently needs to be replaced by an independent and transparent EU type approving system. This new system needs to be accompanied by a fair taxation of diesel, hybrid and plug-in hybrids to accurately reflect on-road emissions.

Even if emission testing is improved and vehicles taxed fairly to reflect real-world emissions, there are limits to how much the efficiency of combustion engines can be improved. This means that soon it will be cheaper and more sustainable to incentivise and heavily invest in EVs. If the transport sector is to make a serious contribution to reaching a decarbonised and pollution free society, urgent commitment is needed to enacting stringent and accurate testing techniques, as well as introducing fiscal incentives for the wider uptake of electromobility.