BellonaBrief – Electromobility in the EU: State of Play and Way Forward

Currently, passenger cars alone are responsible for over 15% of total CO2 emissions in the EU. The global car fleet is predicted to double from 800 million to 1.6 billion vehicles by 2030. In view of goals to decarbonise transport, meet climate change objectives and reduce air pollution, this calls for technological advancements to ensure sustainable mobility in the long term. There are a variety of clean vehicle technologies and fuels in development and use, but electric vehicles (EVs) represent one of the most promising technologies for cutting CO2 emissions, reducing oil imports and improving local air quality. Additionally, EVs will help to increase the predictability of the electricity sector, as EV batteries can be reused to store and manage wind and solar-based electricity. This brief lists Bellona’s recommendations for driving electromobility forward in the EU. 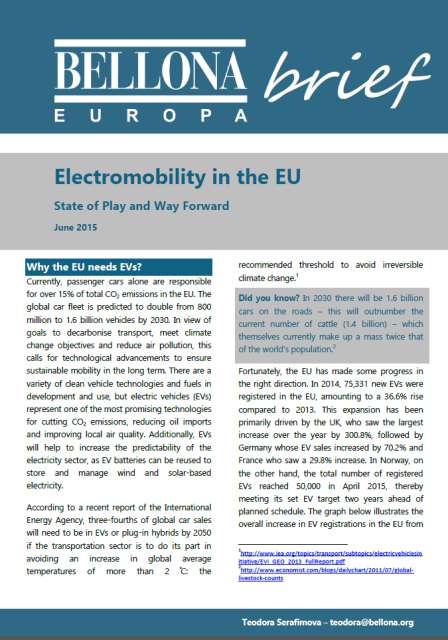 According to a recent report of the International Energy Agency, three-fourths of global car sales will need to be in EVs or plug-in hybrids by 2050 if the transportation sector is to do its part in avoiding an increase in global average temperatures of more than 2 ̊C: the recommended threshold to avoid irreversible climate change.

Fortunately, the EU has made some progress in the right direction. In 2014, 75,331 new EVs were registered in the EU, amounting to a 36.6% rise compared to 2013. This expansion has been primarily driven by the UK, who saw the largest increase over the year by 300.8%, followed by Germany whose EV sales increased by 70.2% and France who saw a 29.8% increase. In Norway, on the other hand, the total number of registered EVs reached 50,000 in April 2015, thereby meeting its set EV target two years ahead of planned schedule.

What is more, the newly elected European Commission (EC) has placed particular emphasis on promoting electromobility. EC President Jean-Claude Juncker, revealed a €315 billion investment package to boost Europe’s economy, making specific reference to EVs and energy efficiency industries as proposed beneficiaries of this package. Furthermore, the recently adopted Energy Union Strategy calls on EU Member States to speed up the electrification of transport by ensuring EVs’ full integration in urban mobility policies and in the electricity grid, both as energy consumers and potential storage facilities.

Despite these positive trends, EVs still account for just 0.3% of the total market of around 12.55 million passenger cars sold during 2014 in the EU. This is largely due to a number of actual or perceived technological, financial, market, and policy challenges. This brief outlines these and proposes ways forward to boost EV deployment, while drawing on the Norwegian success story.