This brief sets out the Norwegian path to the world’s highest penetration of electric vehicles (EVs), much of which can be attributed to Bellona’s decades of advocacy on the topic. The brief also takes a look at the situation at European level. 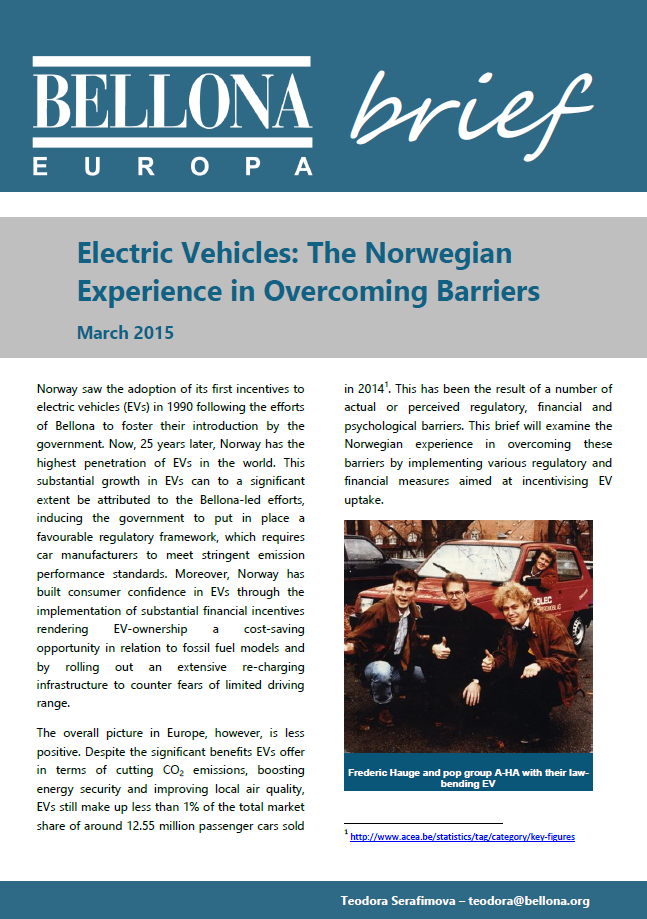 Norway saw the adoption of its first incentives to electric vehicles (EVs) in 1990 following the efforts of Bellona to foster their introduction by the government. Now, 25 years later, Norway has the highest penetration of EVs in the world. This substantial growth in EVs can to a significant extent be attributed to the Bellona-led efforts, inducing the government to put in place a favourable regulatory framework, which requires car manufacturers to meet stringent emission performance standards. Moreover, Norway has built consumer confidence in EVs through the implementation of substantial financial incentives rendering EV-ownership a cost-saving opportunity in relation to fossil fuel models and by rolling out an extensive re-charging infrastructure to counter fears of limited driving range.

The overall picture in Europe, however, is less positive. Despite the significant benefits EVs offer in terms of cutting CO2 emissions, boosting energy security and improving local air quality, EVs still make up less than 1% of the total market share of around 12.55 million passenger cars sold in 2014. This has been the result of a number of actual or perceived regulatory, financial and psychological barriers.

This brief will examine the Norwegian experience in overcoming these barriers by implementing various regulatory and financial measures aimed at incentivising EV uptake.