Drastically reducing the amount of CO2 in the atmosphere is necessary to reach the climate goals of the Paris Agreement. The permanent geological disposal of CO2 captured from industrial facilities, Carbon Capture and Storage (CCS), provides an essential and achievable avenue for reaching this objective. In this brief, Bellona explains why Carbon Capture and Use/Utilisation methods, except for those allowing for permanent storage of CO2, should be excluded from the ETS. 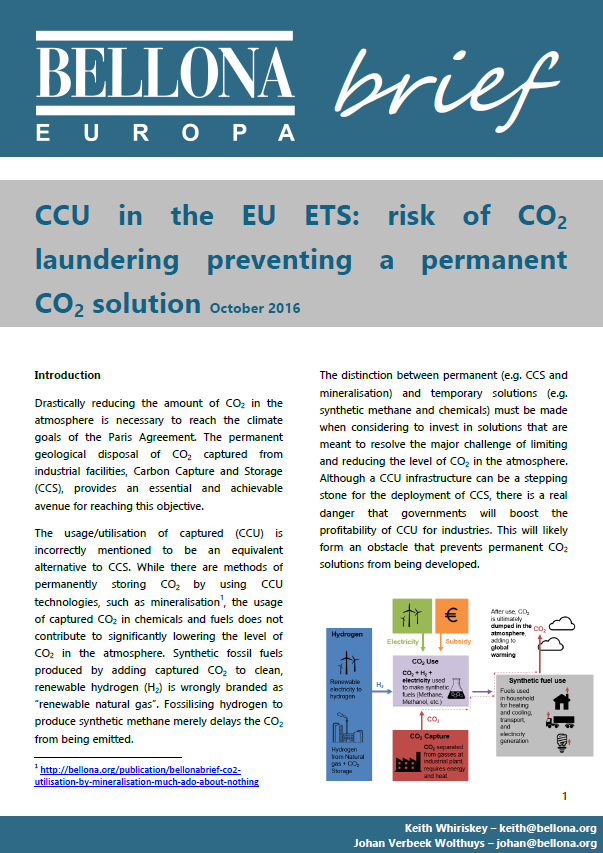 The usage/utilisation of captured CO2 (CCU) is incorrectly mentioned to be an equivalent alternative to CCS. While there are methods of permanently storing CO2 by using CCU technologies, such as mineralisation, the usage of captured CO2 in chemicals and fuels does not contribute to significantly lowering the level of CO2 in the atmosphere. Synthetic fossil fuels produced by adding captured CO2 to clean, renewable hydrogen (H2) is wrongly branded as “renewable natural gas”. Fossilising hydrogen to produce synthetic methane merely delays the CO2 from being emitted.

The distinction between permanent (e.g. CCS and mineralisation) and temporary solutions (e.g. synthetic methane and chemicals) must be made when considering to invest in solutions that are meant to resolve the major challenge of limiting and reducing the level of CO2 in the atmosphere. Although a CCU infrastructure can be a stepping stone for the deployment of CCS, there is a real danger that governments will boost the profitability of CCU for industries. This will likely form an obstacle that prevents permanent CO2 solutions from being developed.

CCU is a stepping stone towards CCS

The development of a CCU infrastructure should serve as a stepping stone towards the deployment of CCS. Although CCU can be used to prevent CO2 from entering the atmosphere in the case of mineralisation, CCS will be required to deeply decarbonise industry and households, as in the case of Leeds. Furthermore, usage of CO2 arising from biogenic sources (i.e. sewage) should be preferred to the utilisation of CO2 from fossil sources.

Synthetic methane should not be called “renewable”

Synthetic methane should not be referred to as “renewable natural gas”. This name gives the false impression that the burning of the gas does not increase the levels of CO2 in the atmosphere. The CO2 emitted from a facility using this gas is still CO2, and it will contribute to global warming.

Use H2 directly as a zero-emissions fuel

Hydrogen should be used directly in industries and households. Industrial complexes should not have the ability to claim the available hydrogen in order to convert it to synthetic methane. Fossilising it by adding CO2 in order to produce synthetic fuels offsets the positive characteristics of H2, namely that it does not emit anything but water at combustion.

It is imperative that CCU methods, except for those allowing for permanent storage of CO2, are excluded from the ETS of the European Union. Including non-permanent CCU in the system could not only incentivise industries to produce more CO2, as this would become a commodity, but it could also allow the CO2 to be emitted without being accounted for by the ETS.