The European Commission has conducted a public consultation as part of the revision process of the EU regulations setting CO2 emission performance standards for new cars and vans (together referred to as light duty vehicles (LDVs)). Bellona shares its views on the topic of fuel economy targets and the uptake of zero-emission vehicles in this response. 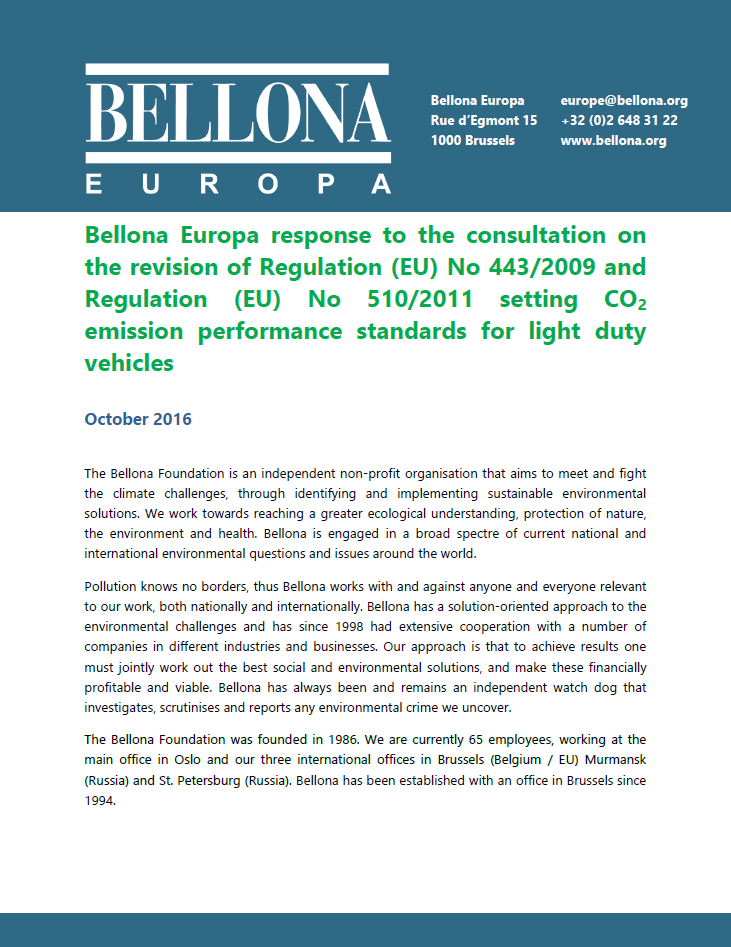 Meeting the EU’s target of reducing CO2 emissions from transport by 60% and eliminating the use of fossil fuels in cars by 2050 will necessitate significant and immediate efforts to transition to a low- and zero-emission transport sector. The tightening of CO2 emission targets for new cars and light commercial vehicles via the currently ongoing review process is an important step in this direction.

Bellona believes that in addition to setting a 2030 target, a 2025 target would be necessary in order to provide investor certainty and ensure sufficient improvements in vehicles’ fuel economy are secured prior to 2030. Equally important is that the new light duty vehicle (LDV) CO2 emission targets be based on the new Worldwide Harmonised Light Vehicles Test Procedure (WLTP). The exploitation by car makers of loopholes and inadequacies in the long-outdated New European Driving Cycle (NEDC) test has undermined the stringency of existing EU fuel efficiency targets. The ambition and stringency of the future EU fuel efficiency targets will therefore be largely determined by the vehicle emission testing regime accompanying these.

While some improvement has been observed in vehicle fuel economy over the past decade, existing EU targets have fallen short in incentivising zero-emission technologies. Bellona sees electric vehicles (EVs) in particular as representing one of the most promising technologies for cutting CO2 emissions, reducing petroleum reliance and improving local air quality. EVs will, furthermore, help to optimise the ever increasing use of renewables and increase the predictability of the electricity sector, as EV batteries can be re-used to store and manage wind and solar-based electricity[1]. According to the IEA three-fourths of global car sales will need to be in EVs or plug-in hybrids by 2050 if the transportation sector is to do its part in keeping global average temperature rise below the 2 ̊C target of the Paris Agreement[2].

In light of this, Bellona calls for additional incentives and measures to be put in place at EU-level, as well as Member State-, regional- and local-level to stimulate both the supply and demand for zero-emission vehicles. Rendering EVs competitive vis-à-vis internal combustion engine (ICE) cars and therefore boosting their demand necessitates long-term government support in the form of targeted policies, including fiscal and usage incentives, and preferential treatment[3].

What is more, Bellona strongly supports the inclusion of a mechanism into the future EU legislation to encourage the deployment of zero-emission vehicles, alongside fuel economy targets for conventional fossil vehicles. This should be in the form of targets requiring car makers to produce and sell a minimum proportion of zero-emission vehicles. When designing these targets, Bellona encourages the Commission to draw lessons from the Californian Zero Emission Vehicle (ZEV) programme, where manufacturers have been granted flexibility in meeting their targets. This possibility to exchange and trade credits would allow car manufacturers to meet their targets more cost-effectively and would encourage new entrants into the market. In countries like Norway for instance electro-mobility has already become a reality[4], with EV registrations having exceeded 112,721 (July, 2016)[5] and accounting for roughly 29% of the country’s new car sales. In light of this, and taking into account rapid Li-ion battery advancements in terms of performance and reduced costs and the positive future outlook, Bellona believes it fair to expect a 10-20% total market share of EVs by 2025 for the EU as a whole. When it comes to new car sales, on the other hand, Bellona expects this share to go up to 100% in light of a growing number of EU countries, including Norway, the Netherlands, and Germany, announcing plans of phasing out fossil cars within 2025-30.

What is more, Bellona finds it crucial that fuel efficiency standards also be applied to road freight transport (N2 type vehicles). CO2 emissions stemming from road freight are the fastest growing segment of land transport emissions both in the EU and globally. While in the EU trucks only make up less than 5% of all road vehicles, they are responsible for 25% of total transport CO2 emissions. Tackling these will therefore be key for meeting the EU’s 2030 and 2050 climate objectives. The recent Low-Emission Mobility Strategy offers hope of breaking this trend by stating the Commission’s intention of accelerating analytical work on design options for standards for heavy duty vehicles. Bellona wants to see the Commission following through with concrete and timely measures.

Last but not least, failure to ensure the timely introduction of stringent CO2 emission targets for LDVs risks undermining the EU’s leadership position in the field of climate technologies and regulation vis-à-vis third countries. The EU is already falling behind the US, China and Japan with regards to regulating and innovating its road freight transport and we are also seeing the EU fall behind Asian manufacturers who are dominating the Li-ion battery production. Failure to ensure rapid investments into strengthening Europe’s automotive battery industry as well as stringent measures to discourage carbon intensive transport and incentivise electro-mobility uptake will put Europe at risk of undermining the industrial competitiveness and the viability of its automotive industry.

[1]Why an electrified transport sector needs to form a core component of the Energy Union, Bellona brief (December 2015), http://network.bellona.org/content/uploads/sites/3/2015/12/EV-Brief_Why-an-electrified-transport-sector-should-form-a-core-component-of-the-Energy-Union1.pdf

[3]Why an electrified transport sector needs to form a core component of the Energy Union, Bellona brief (December 2015); http://network.bellona.org/content/uploads/sites/3/2015/12/EV-Brief_Why-an-electrified-transport-sector-should-form-a-core-component-of-the-Energy-Union1.pdf