Bellona Response to Consultation on the Effort Sharing Decision

Given that the Effort Sharing Decision (ESD) currently regulates more than half of the Union’s total greenhouse gas (GHG) emissions, it is therefore of crucial importance to ensure that significant incentives and financial support are provided for climate mitigation initiatives in the ESD sectors. Bellona sees the transport sector in particular as a large and untapped sector for significant amount of cost effective mitigation potential. Even though a variety of clean vehicle technologies and fuels are in development and use, Bellona sees EVs as representing one of the most promising technologies for cutting CO2 emissions, reducing petroleum reliance and improving local air quality. As a consequence the focus of this response is on the electrification of the EU transport sector and its contribution to broader climate action. 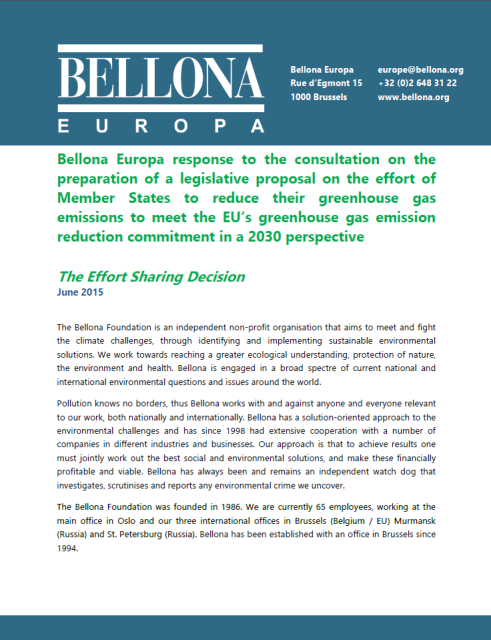 Bellona has been active on the topic of transport sector decarbonisation for over two decades, and was a driving force behind the development of Norway’s electrification strategy, the country with the highest penetration of electric vehicles (EVs) per capita in the world today.

Initiatives in the EU transport sector could build on good practices of policies and measures observed in the Norwegian transport sector to promote the widespread uptake of EVs. The attainment of 50,000 EV registrations in Norway last month can be attributed to a number of regulatory and financial incentives provided by the government to induce EV-purchase. First and foremost, the government has introduced a generous package of financial incentives, such as significant tax exemptions and free re-charging and parking at public parking spots, which have rendered EV ownership a cost-saving opportunity at both purchase point and during use. To ensure consumer confidence in the technology and overcome ‘range anxiety’ barriers, the Norwegian government has invested in an extensive re-charging infrastructure. In addition to those pull factors, the government adopted stringent (85g/km, thus 10 grams below the EU-wide target) emission performance standards for newly sold vehicles. This, in addition to the country’s car import tax, has acted to penalise more polluting cars, and to incentivise EV purchase.

Drawing on the Norwegian experience, Bellona provides a number of recommendations for enhanced EU-wide action in the transport sector. These include the tightening of the 2030 GHG emission reduction target via the ‘flexibility clause’ following the UN climate negotiations in Paris;  the tightening of emissions performance standards for new passenger car; the establishment of an EU-wide funding mechanism to support initiatives in the transport sector; the timely and ambitious implementation of the Alternative Fuels Infrastructure (AFI) Directive; the need to ensure a more holistic approach to EU transport electrification, so as to include long-distance sea and road freight transport; the need to ensure that the transport sector remains outside the EU ETS; and the need to limit flexibilities under the ESD.