Ukraine is at present in an unenviable position. Conflict with Russia is jeopardizing national security and the security of the country’s energy supply. Ratcheting up the pressure on the country is Kiev’s need to rapidly alter its energy legislation, bringing it into accord with that of the European Union and the European Energy Community. The Bellona Foundation, a Norwegian-based energy and environmental NGO, has started a three-year project in Ukraine to assist in the ongoing transition of the country’s energy supply and industrial sector. 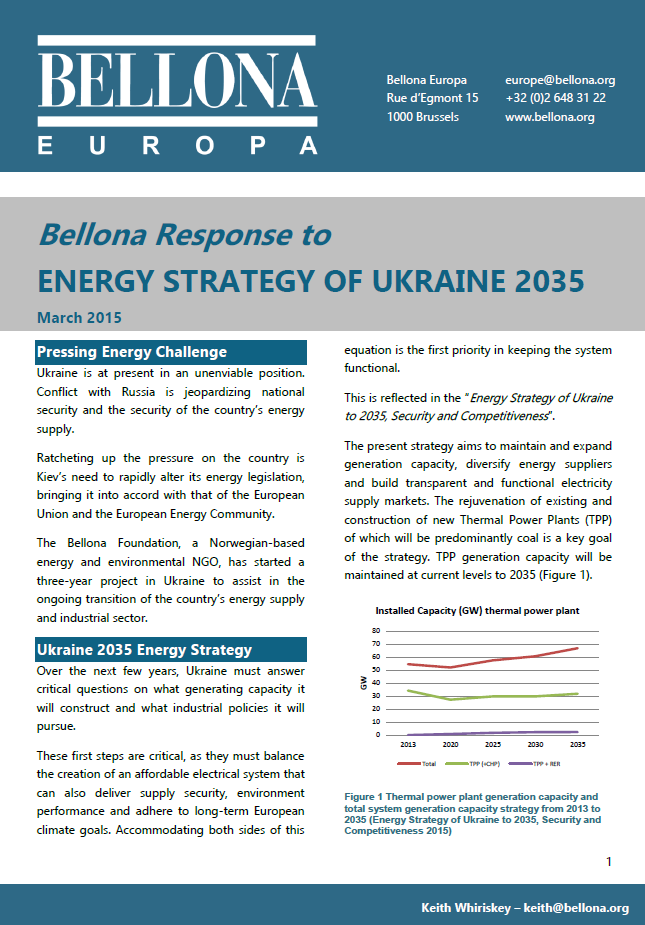 These first steps are critical, as they must balance the creation of an affordable electrical system that can also deliver supply security, environment performance and adhere to long-term European climate goals. Accommodating both sides of this equation is the first priority in keeping the system functional.

This is reflected in the “Energy Strategy of Ukraine to 2035, Security and Competitiveness”.

The present strategy aims to maintain and expand generation capacity, diversify energy suppliers and build transparent and functional electricity supply markets. The rejuvenation of existing and construction of new Thermal Power Plants (TPP) of which will be predominantly coal is a key goal of the strategy. TPP generation capacity will be maintained at current levels to 2035.

Investments made over the next 20 year period to 2035 will have operational life spans to at least mid-century. Continued coal use on the scale outlined in the strategy will require exactly such investments. Many of the coal power plants to meet generation goals will need to be new build or extensively reconstructed, due in part to the decrepit state of existing plants and the need to comply with EU pollution control standards contained with in the Large Combustion Plant directive (LCPD) and the Industrial Emissions Directive (IED).

The strategy does include goals on environmental protection. In practical terms for TPP these focus exclusively on particulate emissions including SOx and NOx. However the document in its present form does not discuss nor propose in any detail solutions for the CO2 intensive nature of coal electricity generation. The planned coal use in electricity generation in 2035 alone would result in an estimated 60 million tonnes of CO2 emitted into the atmosphere.[2] Such emissions will be increasingly incompatible with strict EU climate change goals.

For Ukraine, now more than ever, coal is seen as a guarantor of energy security. It is important that the in addressing immediate issues that Ukraine energy strategy does not create long term structural issues in energy supply. Building an energy system that is at least capable of being compatible with the future beyond 2035 must also be a goal of the energy strategy.

More careful consideration needs to be given on the role of coal fired TPP beyond the 2035 scope of the strategy. Carbon Capture and Storage (CCS) is the only technology capable of reducing emissions from TPP and will also be required to play a role in emissions intensive industries such as steel production.

Bellona regards the inclusion of a CCS strategy in the 2035 energy strategy as a prerequisite for the long term use of coal fired generation.

[1] 18,735 tonnes of oil equivalent coal use in electricity generation at a conversion rate of 1.428 to tonnes of coal. (Energy Strategy of Ukraine to 2035, Security and Competitiveness 2015)

[2] A minimum 20% improvement in the systems CO2 emissions intensity per kWh by 2035 is included. However this will be met through an increase in overall generation and not in emissions reductions at existing or new coal fired plants. A carbon price is also proposed.