Five years after the European Commission passed the CCS Directive, it requires review to assess whether it still provides adequate regulatory framework for CCS in the EU. Article 38 of the Directive calls for an evaluation of its effectiveness, efficiency, coherence, relevance and added value – Bellona’s views on which are outlined in this response. 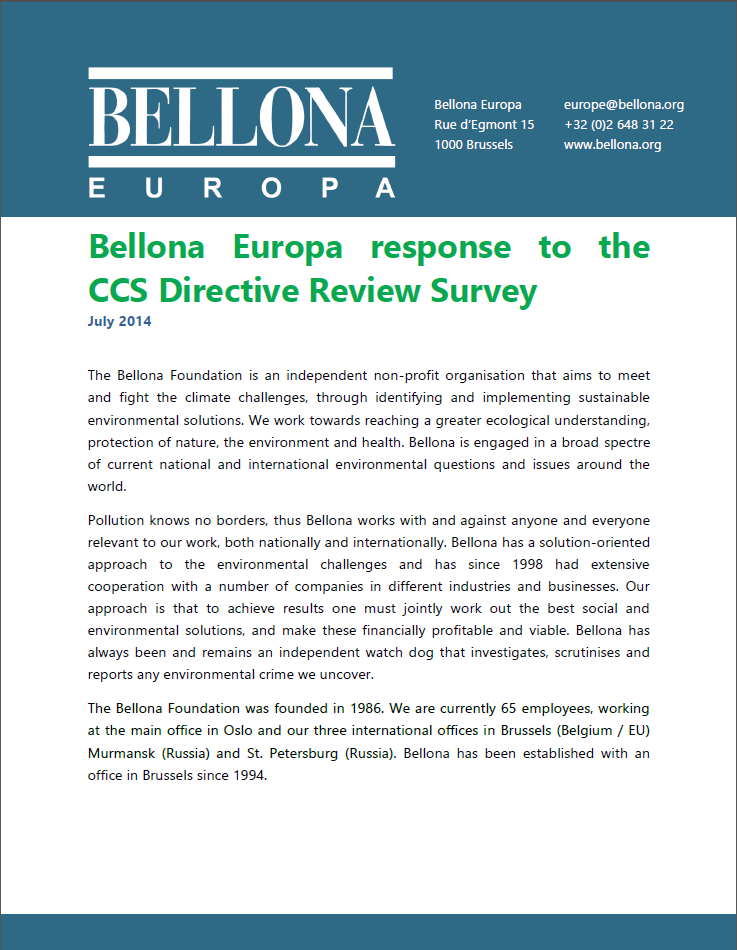 Bellona considers the objectives set out for the CCS Directive – addressing safety, environmental, health and public acceptance concerns, alongside helping to create harmonised procedures to ensure a common approach and helping to increase the speed and scale of CCS uptake – to be largely met. However, due to the delayed deployment of CCS projects in Europe, the overall impact of the CCS directive has been underwhelming.

Apart from helping to create harmonised procedures, there have been few if any concrete instances for the directive to meet the other objectives. In the future, when Europe has CCS projects, certain elaborations and additional standards may be desirable in terms of achieving standardisation of aspects of the CCS chain. However in the absence of any commercial-scale CCS deployment in Europe, efforts should first continue to be placed on the deployment of CCS before the formulation of specific standards.

Policies to actively facilitate deployment is the central requirement of CCS development in Europe.

There exists a single primary cause for the slow progress of CCS in Europe: lack of or lack of anticipation of any legislative driver to develop, deploy or operate a CCS facility. The price signal set from the EU’s Emission Trading System (ETS) is currently and will continue to be insufficient to affect the operational economics of fossil fuel electricity generators for years to come. Thus at present the deployment of CCS as a technology has no commercial basis in Europe, as unabated and polluting solutions continue to be rewarded by market conditions and the extant policy framework. If CCS is to be deployed in Europe in line with the 2050 energy roadmap this greater policy failure needs to be addressed.

An energy and industrial framework to enable the deployment of CCS is necessary to develop skills, expertise, infrastructure and CO2 storage capacity to ensure the rapid growth in CCS deployment that is envisioned post-2030. A failure to build the foundations of a CCS industry in Europe now will greatly increase cost and potentially retard CCS deployment in the future – with adverse results for EU climate, industrial and energy policy.

Alongside this review process attention therefore needs to be paid to delivering CCS projects and Bellona continues to address this in relation to, amongst others, the 2030 framework and ETS reform. Bellona encourages a number of support measures and political mechanisms to spur CCS development in Europe: A CO2 price ramp driven by a tighter ETS cap, public grants to subsidise capital and operating costs as well as a mix of feed-in-tariffs/premia, CCS certificates and a strict Emission Performance Standard (EPS). Redesign of the electricity market would also be necessary.