As 2022 Olympic contenders fall away, IOC urges Oslo to remain in the running

As numerous candidates to host the 2022 Winter Olympics abandon the idea, Russian contractors for the environmentally disastrous Sochi Games this winter continue illegal trash dumping in protected lands that were ravaged to host the most expensive Olympics in history. 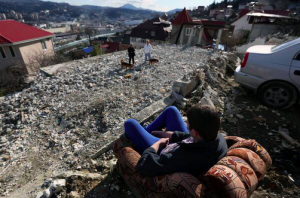 As numerous candidates to host the 2022 Winter Olympics abandon the idea, Russian contractors for the environmentally disastrous Sochi Games this winter continue illegal trash dumping in protected lands that were ravaged to host the most expensive Olympics in history.

Oslo remains undecided as to whether it will prolong its bid.

According to Vladmir Kimaev of the Environmental Watch on the North Caucasus (EWNC) the Akhshtyr landfill that Olympic authorities closed when press reports made it public is now in operation again, accepting construction refuse.

Recent EWNC visits to the site, wedged between the Sochi seafront and the Olympic ski resorts, revealed fresh deliveries of construction waste, discarded bulldozers, Olympic vehicle parts, and rock crushing equipment. Kimaev wrote that “the continue presence of this Olympic waste in this area remains unexplained.” The Russian government spent a reported $51 billion to host the Games, $18 billion to $30 billion of which can’t be accounted for, according to various corruption tallies. According to EWNC, which released a damning report on the environmental devastation caused by the Sochi Olympics, little or none of that money was used to rehabilitate protected lands. These costs, Kimaev said, will be born by Russian taxpayers.

“I would strongly advise Oslo to stay as far away from the Olympics as possible,” Kimaev told Bellona.

Half of the cities submitting bids for the 2022 Winter Olympic have withdrawn them based on the Sochi example, leaving a handful that are viewed even by the International Olympic Committee (IOC) as dodgy prospects.

Oslo ambivalently remains among these candidates, and IOC chairman Thomas Bach has appealed to the Scandinavian capitol to keep its bid alive.

But the IOC’s hands may be too dirtied after Sochi to make their case stick. Norway’s parliament is expected to decide whether to keep or kill the country’s bid in August or September following its summer recess.

Bach made a last ditch appeal to the Norwegian Olympic Committee to keep its bid in the mix on May 19, during which Bellona’s General Director Nils Bøhmer gave him a copy of the EWNC report on Sochi. Beyond environmental damage, the Sochi Games saw numerous jailings, beaten protestors, police harassment of activists and journalists, exile for critics, and the three-year penal colony sentence of one of the Games’ most vocal opponents, Yevgeny Vitishko – who was imprisoned for allegedly spray painting a fence.

Bellona’s Bøhmer said of the meeting with Bach that the IOC ”is having real trouble getting cities to keep their bids going.” Fundamental to this, said Bøhmer, is the ”lack if tranperency in the bidding process.”

The Sochi Games, which won thier bid by only two votes, said Bøhmer, constitute a transparency malfunction within the IOC.

”Member countries from Africa and South East Asia who don’t have any investmet in the Winter Games can be easily manipulated,” he said

Bach acknowleged in Oslo that the IOC is undertaking internal investigations to root out such practices. As for what happened in Sochi, Bach said that the IOC had depended on information from the Russian Olympic Organizing Committee when assessing what was going wrong.

As is clear now, Russia’s promises of a 100 percent Green Olympics fell woefully short of that goal – with only 2 percent of Olympic structures meeting Green standards, according to EWNC.

Bøhmer told Bach during the May meeting that IOC reforms should include ensuring that winning cities deliver on thier promises.

”The IOC gets a lot of promises from candidate cities, and they need a more robust system of making sure those promises are fulfilled and that the Committee has much closer contact with them,” Bøhmer said. ”And when they hear promises that no illegal waste disposal practices are taking place, they should be ready to verify that.” Many cities are not convinced anything will change.

As of June 14, Barcelona, Stockholm, Davos/St. Moritz, Krakow and Munich all withdrew their bids after local referendums stopped them. Voters unanimously cited the environmental wreckage and corruption lessons Sochi taught so vividly as their reasons for voting the bids down.

This leaves Oslo standing with bids from Almaty, Kazakhstan and  Beijing, China.

“There is strong opposition in Norway,” said Bøhmer of the opinions expressed at the meeting with Bach. ”A parliamentary party caucus has already said no to funding the Games,” Bøhmer said, but the eventual decision later this summer is hard to predict, as Norway’s Labor and Right parties may support the bid.

”This is a crucial moment for the future of the IOC, as very few countries that could be classified as democratic are contending for the 2022 Games,” said Bøhmer. Beijing is unlikely to win its bid because the two previous Olympics – 2018 in PyeongChang, Korea and 2020 in Tokyo – gives too much favor to East Asia.

Bøhmer estimated that Almaty is, then, the only viable bid, but added that, ”Almaty, Kazakhstan does not have a strong democratic tradition.” If Almaty is chosen, he said, ”then only non-democratic countries will be hosting the Olympics, and that poses difficulties for sponsors, and whether they want to contribute to this.”

”Democratic countries […], where voters’ decisions are law, can refuse senseless, expensive events,” like the Olympics, wrote Shevchenko. ”But a totally different time is coming, and the Olympics will be the exclusive purview of ’the third world’ and ’governments with peculiarities.’”