The annual general meeting on the European Technology Platform for Zero Emission Fossil Fuel Power Plants (ZEP), of which Bellona is an active member, was held as a public hearing in the European Parliament in Brussels on 26 November 2013. Bellona President Frederic Hauge addressed a full room of Members of the European Parliament (MEPs), industry representatives, environmental organisations and other CO2 Capture and Storage (CCS) stakeholders in Brussels. 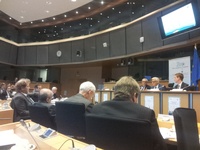 The Zero Emissions Technology Platform, of which Bellona is an active member, held its annual General Assembly in the form of a hearing in the European Parliament on 26 November. President of the Bellona Foundation Frederic Hauge spoke at the hearing, which centred on the role of CO2 Capture and Storage (CCS) in the EU’s 2030 strategy.

In his intervention, Hauge noted that there is no other option than CCS for energy intensive industries and for coal power, if that industry is to survive. “That is, unless you bet against the climate,” he added, and continued “but I am not into that kind of betting.”

Hauge also clarified the false dichotomy that exists between renewables and CCS. “As an environmentalist, of course I would like to see renewable energy, and we will. But until we do and during the transition, storing CO2  is one hundred percent better than releasing it all into the atmosphere.” 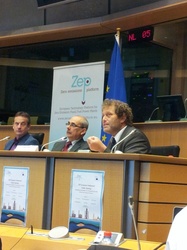 The ZEP hearing was co-hosted by three Members of the European Parliament (MEPs), reflecting the wide political recognition that CCS is necessary toward achieving a low-carbon society and economy. MEP Jerzy Buzek, former President of the European Parliament and member of the European People’s Party from Poland, opened the session, followed by Teresa Riera Madurell, representing the Socialist & Democrats group. Liberal Democrat MEP Chris Davies concluded the MEPs remarks. Davies has long championed CCS in Europe and has most recently authored a report on the development and application of CCS in Europe, which passed the Parliament’s environment committee the day after the ZEP hearing (27 November, read more here).

While the MEPs hosted the hearing, the European Commission also had its say. DG Energy Director Marie Donnelly underlined the feasibility of CCS and its centrality to climate change mitigation. Donnelly went on to note the need to learn from past experiences with, thereby in effect referring to the protracted process European CCS projects have had to handle, only to not get any funding. The NER 300 scheme, initially intended to fund as many as 12 CCS projects in Europe, has so far funded none. Donnelly underscored the necessity to keep the remaining two European CCS projects alive. To this, Head of Unit in DG Clima Piotr Tulej, added the need to reform the EU’s Emission Trading Scheme (ETS).

In response to a question posed by Bellona Europa’s Director Jonas Helseth, Tulej mentioned that the Commission will see after the NER 300 rewarding in 2014 whether such a scheme is viable for the future.

Bellona President Frederic Hauge noted that the NER 300 was better designed for early movers and is less suitable to longer-term large-scale projects, which is what Europe needs. CCS as a technology is being proven in places such as at Boundary Dam in Saskatchewan, Canada. What is needed now is several full scale projects to drive costs down.

Hauge said: “While their signals are welcome, the Commission should keep in mind that we need CCS, but we also need to go further. Carbon negative technologies, such as the combination of sustainable biomass with CCS, so-called Bio-CCS, will be necessary within the next decades to remove excess CO2 from the atmosphere. These are the kind of technological synergies Bellona wants to see and which Europe could lead on. To do so requires a more robust basis for CCS now.”

Other speakers at the hearing were from the International Energy Agency, the United Kingdom government, Alstom, the Global CCS Institute, The UK’s Trade Union Congress and the Polish Institute for Chemical Processing of Coal. A recording of the ZEP hearing is available here.

Graeme Sweeney, Chairman of the ZEP Advisory Council, presented two new ZEP reports at the hearing. ‘CO2 Capture and Storage: Recommendations for transitional measures to drive deployment in Europe’ and ‘The Case for Urgent Action on CCS in Europe’ both confirm the critical importance of CCS and the need for urgent action to ensure its wide deployment. They are available from the ZEP library.