The key to CCS is the long-term business case

“We have to provide an affordable technology to the developing world for it to come out of poverty in an environmentally acceptable way,” Paal Frisvold, chairman of the board at Bellona Europa, said as he opened the 3rd Annual Brussels Carbon Capture & Storage Summit 2012 on 15 May in Brussels. 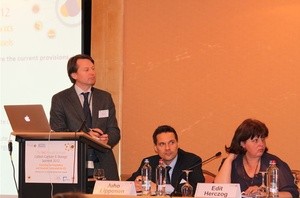 The event was organised for the third time to gather professionals from industry, EU policymakers and other stakeholders for a debate on the progress of CO2 capture and storage (CCS) in Europe. This year’s discussions focused on the impact of the global financial crisis on the roll-out of CCS, the state of play regarding CCS funding models including the future role for public subsidies. Finally, it aimed to explore the direction in which the applications and uses for CCS should go to drive its deployment potential.

Philip Lowe, Director General for DG Energy at the European Commission, confirmed in his keynote speech that the European Commission has a very strong interest in CCS. “What started us thinking about CCS back in 2007 is that we needed to combine the growing industry and energy demand with decarbonisation commitments,” Lowe said. He underlined that for a number of countries, especially in Eastern Europe, CCS is necessary to reach emission reduction targets. According to in-depth analysis by the Commission, only very limited investments involving coal without CCS will take place after 2015. Moreover, investments with CCS in gas are due to increase significantly after 2030 and industry’s emissions will become ever more important to tackle in the fight against climate change. “Fossil fuels will remain in the energy mix, therefore CCS is needed for decarbonisation,” said Lowe, stating that additional support mechanisms for demonstration and deployment have to be set up in the absence of a strong carbon price. He also reconfirmed that a proposal for back-loading of auctioning in the Emission Trading System’s 2013-2020 trading period announced by climate commissioner Connie Hedegaard will be tabled before the summer.

Graeme Sweeney, Chairman of Zero Emissions Platform (ZEP) underlined how important it is that a long term business case for CCS is made – including making the first demonstration plants happen. It was made clear throughout the day that moving CCS forward require active support of the European CCS demonstration programme as well as R&D in the fields of CO2 storage and transport.

Two Members of the European Parliament, Alyn Smith and Edit Herczog, explained the political perspective on CCS in current times of economic constraints. They called for a strong, united CCS voice to influence the political arena also from the point of view of the coming elections. The role of measures other than public funding was mentioned as a key imperative. “The strategy in moving CCS forward with political support will have to be well planned and based on facts,” Smyth said. “The EU will have to reconfirm its commitment to remain in the forefront of the progressive climate change movement,” Herczog added later on, with reference to the role of CCS in the next Multiannual Financial Framework of the EU.

Despite the problems, CCS is moving forward. Governments in the US, EU, Australia, Canada, UK, Norway, South Korea and the Netherlands have together committed $21 billion for CCS demonstration worldwide. Projects such asDecatur are already capturing and storing CO2. “The technologies exist – there are more than 70 projects in the pipeline and a number of countries that are supportive in their CCS approach,” said Juho Lipponen, head of the CCS Unit, International Energy Agency (IEA).

Jane Paxman from 2Co Energy, the company behind the Don Valley CCS project, inspired optimism on how to successfully plan the financing of a GBP 3bn CCS project. Don Valley’s business model involves three key points – capital grants from the EU and the UK, cheap debt through South Korean partners and enhanced oil recovery (EOR). According to Paxman, the benefits to the UK treasury from the Don Valley project, due to taxation of the additional oil production and delayed decommissioning of offshore installations, would be roughly equal to what it will cost the treasury through grants. The EOR revenues to the project furthermore enable the cheap debt: 2Co is in the process of confirming South Korean funding thanks a 15% stake by Samsung in the project.

Knut Kroepelien, Environmental Counsellor from Mission of Norway to the EU, commented on how to create trust and political momentum for CCS.  “I cannot underestimate the role Frederic Hauge, Bellona’s founder, has played in Norway in influencing public in the area of CCS. Coming from a die-hard environmentalist – saying that we need to do CCS is something completely different than the same thing coming from Statoil,” Kroepelien said. “Test Centre Mongstad shows to the world that the technology works and that we are on the way to scaling it up,” said Paal Frisvold, when wrapping up the discussions. “One common voice needs to speak up for the CCS case towards the politicians to present a winning case to them,” he added.