Bellona’s Nina Popravko: We are not at war, we’re defending citizens’ rights

ST. PETERSBURG – “What does ‘Bellona’ mean?” a judge at the Arbitration Court asked me once during a trial. “It was the name of the Roman goddess of war and justice,” I replied. “So is that why you’re always at war?” the judge asked. “We are not waging a war,” I said. “We are trying, as best we can, to defend our citizens’ ecological rights and lawful interests when it comes to a favourable living environment.” Throughout 2010, Bellona in St. Petersburg worked to do just that – and do it professionally and with the best result possible.

Published on January 16, 2011 by Nina Popravko, translated by Maria Kaminskaya 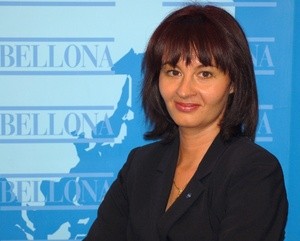 In 2010, visitors kept flocking to the legal aid clinic that Environmental Rights Centre (ERC) Bellona had opened to provide legal counselling and representation in court to citizens and NGOs fighting violations of the Russian environmental legislation by state officials or commercial organisations. We heard complaints brought by residents and grassroots organisations from both St. Petersburg and elsewhere in Russia.

People living in major Russian cities like St. Petersburg want to breathe clean air and drink water that has not been poisoned by waste, eat food that complies with international standards and protect their parks and public gardens from felling and infill construction projects. They want to keep enjoying their forests and lakes and keep unique cultural monuments and natural sites intact for future generations.

So we kept working. Preparing motions, applications, complaints, and inquiries. Filing reports with prosecutors’ offices and the police, offices of government officials and legislative bodies, both federal and local. As a result, we were successful in settling many issues involving violations of sanitary and epidemiological laws out of court, work has been continuing on a number of other cases, and we have taken several especially notorious cases to court. Bellona St. Petersburg will describe this work in detail in its yearly report for 2010.

2010 saw the start of operations in yet another area of our work: helping citizens fight against corrupt practices behind various violations of the Russian ecological legislation and other laws. This free legal service was organised in July 2010 in cooperation with Transparency International, a global civil society organisation working to fight corruption worldwide.

Transparency International has launched anti-corruption legal help offices in many countries, including several in Russia. The one opened in Bellona’s offices will advise citizens on how to resist corruption-based offences in the spheres of ecology and urban planning.

In Russia, corruption has penetrated almost all areas of human activity. Russia is a country with vast natural resources, and we constantly see manifestations of corrupt practices that take place at all government levels and give rise to such serious issues as illegal sand extraction and clear-cutting, poisoning rivers and lakes with industrial waste and expropriating publicly-owned river banks and lake shores for construction of private villas, laying gas and oil pipelines through protected natural sites and contamination of whole areas with radioactive waste.

This goes on with permission or protection bought from authorities while land in St. Petersburg is being sold and residential development projects pursued in circumvention of existing laws, or skyscrapers and business centres are being built in St. Petersburg on the territory of internationally protected cultural heritage sites – all in spite of the laws in force and the massive protests these violations generate among the public.

Experience shows these problems are the result of corruption that has metastasised across all industries and public or commercial activities, bottom to top. Of course it is impossible to change this in one day, so we keep working. One of our lawyers, Artyom Alexeyev, oversees this area of Bellona St. Petersburg’s activities. He is in charge of preparing complaints and requesting prosecutors to initiate investigations and bring those suspected of corruption-related offences to justice. We keep a watchful eye on the actions – or lack thereof – of government authorities responsible for making decisions on this or that crucial matter. We also urge legislators to improve those regulations that are fraught with the risk of breeding corruption in real-life practices – lest state officials are tempted to abuse the power vested in them for unlawful purposes.

We are proud to say we have seen some successes in our work, and criminal cases have been initiated on the basis of some of our complaints.

Last year, Bellona St. Petersburg was actively engaged in providing attorney representation to ecological activists, citizens’ action groups, and NGOs involved in various court proceedings. One of the cases that stirred up a national controversy and widespread public outcry was the construction of a skyscraper in the St. Petersburg district of Okhta, a project that was certain to ruin the unique St. Petersburg skyline were it to be eventually built. A nine-month-long battle in courts finally resulted in the authorities’ decision to pull back the order to develop the site – a great, though arduous victory.

By winning the case we were able to carry out our mission – provide legal support to those St. Petersburg citizens who believe that the historical panorama of our city must be protected and preserved for both the city’s residents and their future generations. The complaints we filed in the City Court, protesting regional laws as going contrary to federal norms, were upheld and those laws were repealed. When the court’s decision comes into force, all construction that envisions buildings whose height exceeds the limit permissible for protected cultural heritage sites will be outlawed in St. Petersburg.

Last year, we also won our motion to dismiss a case against a St. Petersburg activist who had been detained by the police for exercising one of his lawful constitutional rights – organisation of and participation in a rally gathered in defence of the right to peaceful assembly, guaranteed by Article 31 of the Russian Constitution. The defendant had been charged with organising an unsanctioned protest and resisting arrest and sentenced to a fine and a 14-day administrative arrest. We managed to have the sentenced overturned and all criminal proceedings ceased against our client.

Another headline-making case required our participation last year. For the better part of last year, ecological activists in Moscow were fighting to save a forest in Khimki from clear-cutting started to make room for a Moscow-St. Petersburg highway. We went to Moscow courts to represent several Khimki activists in a case where the company responsible for the felling works in the forest brought a suit claiming it had suffered financial losses as a result of the protesters’ actions. Our arguments in court resulted in the plaintiff withdrawing the suit and the case dismissed – another success on our records.

As an environmental rights NGO, Bellona itself could not stay away from the events that were unfolding around the Khimki forest and the highway project, and we filed a lawsuit with a Moscow court on behalf of the general public to seek compensation of environmental damage brought on by the ongoing deforestation. The court rejected the lawsuit, but Bellona has filed a special appeal against the decision with the Supreme Court of the Russian Federation, and the case is now pending.

Another case awaiting consideration is Bellona’s complaint to the European Court of Human Rights regarding our right to pursue our activities as per the organisation’s charter and our right to obtain ecological information about the construction of new reactors at the Leningrad Nuclear Power Plant, a site in Sosnovy Bor, near St. Petersburg. We hope that the judges in Strasbourg will accept our complaint and examine our case in due course.

We are also planning to continue to fight for one of St. Petersburg’s most beautiful public parks, the Lopukhin Garden, despite an adverse ruling we have received on our complaint from the St. Petersburg Arbitration Court. The garden will be razed and its territory consequently used for development unless we succeed in this case. Court proceedings are still ongoing, however, and an appellate hearing has been scheduled at the court for January 18.

Work is now in progress at ERC Bellona to publish a report that will provide a comprehensive picture of the various violations of citizens’ ecological rights that take place across Russia’s many regions. By compiling this report, we aim to draw the authorities’ attention, both at the regional level and in the top echelons of government, to the problem of environmental offences. We must show that it is time to make concrete steps – before it is too late and while our nature can still be saved and favourable living conditions provided for our population.

And we are fully prepared to follow our mission and the objectives we set when we created our centre to defend our fellow citizens’ right to a healthy environment – including legal support and representation of citizens in pursuit of that right.