Fifteen activists from the Norwegian environmental groups Bellona and Nature and Youth today blocked for some hours the launch of the Eirik Raude, a search and drill oil rig, as it tried to leave the northern Norwegian Ølenfjord en route to the Barents Sea. Bellona President Frederic Hauge summed up the protest action as successful.

Published on November 14, 2004 by Hanne Bakke, translated by Charles Digges 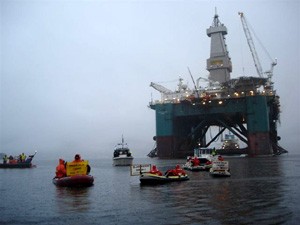 Because the rig was being towed, and because the activists were more agile in their own boats, a blockade formed some 200 meters from the rig. Both the rig and the supply boats were halted.

In addition to the activists rubber boats, two large supply boats, two police vessels, two Norwegian Coast Guard cutters along with rubber boats filled with reporters were also on the water in front of the rig. 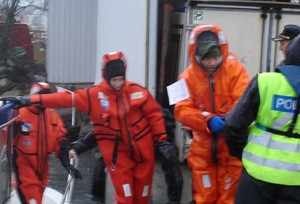 The Eirik Raude meantime began to progress before all of the activists were out of the water, and the platform cleared the last activist in the water by only 20 meters.

Following the retrieval of the Bellona and Nature and Youth environmentalists from the water, they were arrested and taken to the office of Ølens police sergeant for questioning. Bellona President Hauge was fined 5000 NOK and the rest of the activists were also released with fines shortly thereafter.

An extremely successful action. We focused fully on safety and the whole time behaved predictably for the police, Hauge said in a telephone interview from Ølen. He is extremely satisfied that Bellona and Nature and Youth made their mark to stop the rig.

What Bellona and Nature and Youth Activists oppose
During the summer of 2004 Hydro and Statoil both sought to bore three test wells in the Barents Sea. The drilling was scheduled to begin between late 2004 to early 2005. This is the first drilling operation since a study on the oil industry was published in 2001. The Norwegian parliament adopted a measure saying the area could be reopened with new regulations stipulating that oil drilling must occur without spills that reach the shore.

Nevertheless, Hydro has solicited spills with a number of substances. The State pollution regulatory agency has given permits to all who have applied to drill. Bellona and Nature and Youth have the possibility to file complaints against these permits. The deadline for complaints was November 8th. This complaint was first handled by the pollution regulatory agency before it was sent over to the Ministry of the Environment. The Environmental Minister Knut Arild Hareide will make a determination on how the permits are handled. He will also determine that drilling be postponed until there is a ruling on the complaint. If this happens, drilling will be postponed several months.

More details on the various petitions, hearings, complains and appeals can be found at
www.bellona.no and www.nu.no.

A brief history of the earlier situation
In 2001, Hydro, Statoil and the Italian oil concern Eni implemented five completed 5 test wells in the Barents Sea. The environmental organizations Bellona and Nature and Youth rallied against the oil rig as it headed north. The protests and the drilling were greeted with wide media attention.

The test drilling was in dispute as the Barents Sea is both an extremely vulnerable water ecosystem and the formal processing of the petition was undemocratic and extraordinarily quick. It has not been sufficiently explained what consequences drilling operations in Lofoten and the Barents Sea could bring to the surrounding environment.

An important victory for the environmental movement in connection with these test drilling operations was the authorities decision that test drilling will be managed in the same manner as similar operations on land. Earlier practices dealing with test drilling have been especially rapid in addressing petitions and have imposed snap deadlines on hearings for environmental organizations. This will no longer be the case.

In autumn of 2001, Hydro planned a test drill off the coast of Lofoten. The Labour government declared that drilling could not begin before Environmental organizations complaints had been thoroughly addressed. This led to a delay and, later, a cancellation of drilling. This was a significant victory.

In 2001, the new government of Kjell Magne Bondevik decided that it would for the first time undertake a report to establish what the consequences of oil drilling off Lofoten and in the Barents Sea could be. This was heralded as a total administrative plan that should be formed for the Barents Sea. This plan would encompass all factors influencing the environment in the Barents Sea, as well as recommend a tactic to manage the sea area that the Barents Sea secures as an ecosystem. The environmental movement praised the government for issuing this report.

Why shouldnt there be oil drilling in the north?
All oil activity leads to significant spills of climactic pollution. Climate problems are the biggest environmental problem facing the world today. Oil and gas operations account for a fourth of Norways pollution. When we know pollution must be dramatically reduced, we cannot open more sea area for oil and gas operations.

The sea area from Lofoten to the Barents Sea is an especially valuable and vulnerable territory. These sea ranges are spawning grounds for some of the most important species of fish. At the same time, it is a particularly important territory for sea-foul. Between 15 million to 20 million sea-foul nest in the Barents Sea. The whole Barents ecosystem is special because it lies so far to the north.

Why is the struggle against test drilling important for the environment?
When oil companies obtain permits to search and drill, they also get the right to extract the oil they find. Formally, they are required to apply first to the parliament to expand operations, but the parliament, but so far, the parliament has never declined such an application. Oil companies also have significant funds and resources at their disposal to plan and carry out test drilling. They are therefore eager to develop the discoveries they will eventually make.