Finnish Prime Minister Paavo Lipponen regrets that his using the term “terrorists” caused consternation – but not that he applied the term to Bellona activists. “We can not accept being branded as terrorists. Terrorism is an abominable thing,” says Bellona president Frederic Hauge. 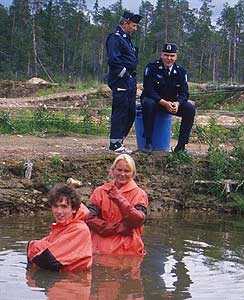 "I am sorry that the word terrorist causes consternation," says the Finninsh Prime Minister to Norwegian news agency NTB.

"Terrorism should cause consternation. The term is loaded, and we do not find the PM’s apology sufficient. My wish and my challenge is that he produces a real apology so that we can shake hands before he leaves. Then we may work together against environmental threats in the continuation," says Hauge.

To Finnish newspaper Hufvudstadsbladet Lipponen says he doesn’t see any reason to apologize. "Bellona should apologize to us, for their actions within Finland," he says.

Secretary Ari Heikkinen of the Finnish Green party, which holds the Environmental Ministry in the current coalition government, says to Finnish media today that Lipponen’s statements about Bellona were "a badly prepared and surprising attack against popular activism." Lipponen owes both Bellona and the Norwegian populace an apology, according to Heikkinen.

Wants apology in writing
Bellona is preparing a letter to Lipponen, in which the foundation requests a written apology from the Finnish PM.

Bellona activists killed Finnish fish
The incident referred to by Lipponen happened in 1995, at a fish farm in Rovaniemi in northern Finland. The farm, raising rainbow trout, was infested with lethal salmon parasite Gyrodactylus salaris; the infestation threatening the future of important Norwegian stocks of wild North Atlantic Salmon.

The Fins refused to shut the plant down, even after several pleas from local and central governments in Norway. A team from Bellona then took action, slaughtering some 400 fish at the site before being apprehended by Finnish police. The activists were interrogated and released, later to be fined some 100 USD each. A claim from the fish farm owner to be reimbursed by Bellona in the amount of 100,000 USD was dismissed by a Finnish court (those must have been very expensive fish…). Finnish authorities, enlightened by Bellona arguments as well as feeling the pressure from broad media coverage, shortly thereafter bought the plant and shut it down.

The short of it then: What the Finnish PM describes as "destroying a fish farm" amounted to the killing of 400 small fish, a loss at the part of the fish farmer a Finnish court ruled Bellona had no obligation to reimburse; while the acts the PM deems "terrorism" were stipulated by another Finnish court so vicious that the "terrorists" were fined a total of less than 1,000 USD.

Bellona’s position in Russia threatened
Meanwhile, newspapers in Russia have already started quoting the Finnish PM – his wording fitting nicely in with earlier attempts by the Russian secret police of defining Bellona as spies in that country. There’s only been a year since the final acquittal of Bellona employee Aleksandr Nikitin by the Russian Supreme Court Presidium, from the FSB accusations of treason and espionage. And in the near future, environmental journalist Gregory Pasko goes on a similar trial.

Paavo Lipponen does nothing to help with his unprecedented definition of "terrorism".