Bold explorers have always heard people call them crazy, and Iya Gordeyeva, an electric car driver from St. Petersburg, Russia and head of the city’s electric vehicle association, is no exception. 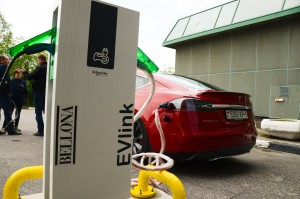 Bold explorers have always heard people call them crazy, and Iya Gordeyeva, an electric car driver from St. Petersburg, Russia and head of the city’s electric vehicle association, is no exception.

“What are you doing? It’s impossible! It’s nuts!” was the refrain she heard from friends when she told them she was driving her Tesla from the city of White Nights to Murmansk, Russia’s arctic capital, where the sun, in the summer, never sets.

Though it’s a far cry from mushing it to the North Pole on a dog-sled, driving an electric car over 1,300 kilometers brings daunting challenges of its own in Russia, especially along the European border in the country’s Northwest.

But as told by her and eight other Tesla drivers who took part in a Bellona-sponsored electric car rally held over the weekend, highlighting those challenges was exactly the point.

While St. Petersburg and neighboring Scandinavia have lush accommodations for electric car owners, Murmansk has but one publicly-available high-speed electric car charger, located at the city’s Park Inn Hotel, which was donated to the city by Bellona last year.

Still, the drivers – two of whom joined Gordeyeva on the road from St. Petersburg, another four of whom drove from Norway, and two more who trekked from Minsk, Belarus – had a point to prove as they took to the highways fueled with Russian charge-anxiety: With a little ingenuity and nerve, the Arctic can be conquered by eco-friendly rechargeable electric cars.

It’s a point Russian officials seem to be warming to. In April, the regional government of Murmansk started considering the kinds of incentives for e-car drivers that their Norwegian cousins already know well – perks like access to free parking and public charging points, lavish tax breaks and waived registration fees for electric vehicles, and coveted rights to restricted rush-hour traffic lanes.

Nationwide, a momentum is gathering as well. While there might only be about 1,800 electric cars registered in Russia, according to statistics from the beginning of this year, nearly 800 of those were purchased and registered in  2017. And that figure doesn’t even figure in the number of used electric cars, which pour across the Sea of Japan to Russia’s Far East. Anecdotally, those account for another 1,000 electric cars that hit Russia’s roads last year.

And Russian e-car drivers are starting to flex their civic muscles. According to a legislative packages passed a few years ago by Moscow, every traditional fueling station in the country must get outfitted with high-speed chargers for e-car owners. 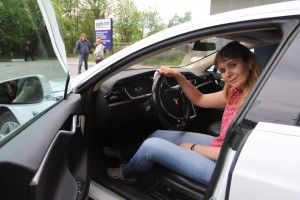 The practical roll-out of that ambitious plan has been predictably sluggish. But Russia’s e-car drivers know their rights, and at the beginning of the year, hundreds of them took to the streets in Vladivostok to demand the government build the charging stations it promised them.

All of which reveals an important truth about spreading the culture of electric cars: If you build the chargers, they will come.

It was that notion that Bellona and the rally’s co-organizers at the Norwegian Electric Vehicle Association hoped to capitalize on at this weekend’s event.

“With this rally, skeptics can see that is absolutely possible to drive throughout the northernmost regions,” said Bellona’s Vladislav Nikiforov, who helped arrange the event. “Electric vehicles are the future whether you like it or not.”

Silje Wannebo, with the Norwegian Electric Vehicle Association, said the sight of electric cars whizzing silently through the harsh reaches of high Scandinavia and Northwest Russia offered a compelling a litmus test for those hoping to make the switch from fossil fuels vehicles.

“If these cars work in the northernmost part of Norway, they work everywhere,” she said.

Still, the conditions on the road for e-car drivers in the Arctic climbs leave much to be desired. By the time Kjetil Sandal, Martin Dunsed, Stig-Gunnar Lyngmo and Rune Rafaelsen – the four Norwegian drivers – reached the Russia-Norway border post of Kirkenes, they knew they were looking at their last charge until Murmansk, which was still 220 kilometers away.

But that was still a song compared to what Gordeyeva had to cope with. In order to forge north from St Petersburg and up through Karelia to Murmansk she had to pack a diesel generator to make sure her Tesla could stay charged.

And if she had any breakdowns, she was sure to be out of luck when ringing for a tow truck. For vast swathes of her drive along Russian highways, cell phone service was patchy to nonexistent – which made it nearly impossible for her to coordinate her progress with the drivers from Minsk.

Yet she was able to take part where others weren’t. A number of other drivers from the St Petersburg Electric Vehicle Association who wanted to come along were limited by the cars they drive. Nissan Leafs, which are far more affordable on the Russian market than Teslas, can only pack a 170 kilometer charge.

An agreement between Bellona, the government of Murmansk and several area energy businesses made earlier this year, however, aims to ease the anxieties of e-car drivers who would rather watch the road instead of their charge meters.

The agreement is geared toward building a network of charging stations at critical points in Finland, Norway and along highways in Northwest Russia to both boost charge confidence among those driving e-cars from Europe, and to spur growth in the number of those looking to buy e-cars in Russia.

During the rally, some of those hopes were being realized. Yevgeny Nikora, the Murmansk Region’s deputy governor, announced on Friday that two new high-speed chargers would soon be built, one in the region of Zapolyarny and the other near Starya Titovka, both near the Norwegian border crossing.

All of this will come as good news to Gordeyva, whose roundtrip driving distance was 2,950 kilometers, and who by the end of the trip had had her fill of adventures. But she summed up the rigors of the road as a necessary step toward showing just what electric cars can do for the Russian environment.

“On the one hand, it was interesting for me, as the owner of an electric vehicle, to test it at such a long distance,” she said at the finish line. “On the other hand, as the head of the St Petersburg Electric Vehicle Association, I understand how important it is to popularize electric transport, and the kilometers I’ve driven will greatly contribute.”

All told, the nine drivers in Bellona’s rally racked up a combined total of 27,000 kilometers while on the road, which if driven in conventionally fueled cars would have added at least, 4280 kilograms of carbon dioxide to the earth’s warming atmosphere.

Instead, they added as few greenhouse gasses to the atmosphere as the Arctic’s initial dog sled-riding pioneers did – which makes electric cars at the roof of the world an option worth exploring.