Yesterday, 21 April 2016, Brussels hosted the inaugural event of the Platform for Electro-mobility, a growing multi-stakeholder effort to accelerate the transition in Europe towards sustainable multimodal electro-mobility, of which Bellona is a founding member. This high level event demonstrated the overwhelming agreement across industries and policy makers over the unequalled role of electro-mobility in making Europe’s transport more efficient, less dependent on imported energy, low carbon, clean and quiet. 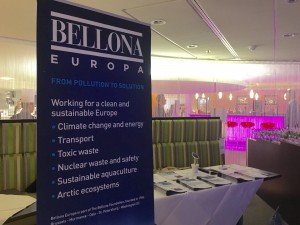 Bellona's stand during the launch event of the Platform for Electro-mobility, Brussels, 21 April 2016

The Platform for Electro-mobility is an alliance of organisations from across industries and transport models representing producers, infrastructure managers, operators and users of transport means as well as cities and civil society. It shares a vision of electro-mobility for surface transport delivered through multiple modes including electric bikes, cars and vans, trucks, buses, rail and other public transport. To this end, the platform works on joint engagement efforts towards the European Institutions to drive the development, implementation and support for sustainable EU policies, programmes and initiatives to move people and goods by electro-mobility.

Yesterday’s high-level event aimed at raising awareness among EU policy makers and organisations active in the electro-mobility field of the objectives and activities of the platform. The event therefore also served to launch the platform’s position paper entitled Decarbonising transport through electro-mobility, listing the platform’s recommendations in the lead up to the Commission’s Communication on the Decarbonisation of Transport, expected in early summer 2016.

As one the platform’s founding members, Bellona used the occasion to launch its latest policy brief on ‘Attaining an interoperable EV recharging infrastructure in Europe’. The brief provides a number of recommendations for the interpretation of the Alternative Fuels Infrastructure (AFI) directive so as to ensure its uniform implementation across EU countries. By drawing on best practices and lessons learnt from the Norwegian EV success story, this brief also shares Bellona’s recommendations for overcoming interoperability issues central to electro-mobility, namely: standard- and fast-charging infrastructure, and the potential synergies with electric infrastructure already in place for public transport; smart charging; electricity roaming; payment solutions; and parking schemes.

The conference was opened with a key note speech by Henrik Hololei, Director-General for Mobility and Transport of the European Commission, who highlighted electro-mobility as crucial in not only attaining climate change and air pollution, but also as an engine of growth and job creation.

“Now that we have the necessary regulatory framework in place, what we need to see is investment” concluded Hololei after reminding the audience of the Commission’s commitment to reducing its transport emissions by 60% by 2050 as compared to 1990 and to becoming a leader in electro-mobility and energy storage technologies as stated in its Energy Union Strategy of last year.

Panelists from the Commission’s Directorate General for Climate Action, the Dutch Council Presidency, Alstom, Renault-Nissan and the City of Manchester agreed that the Energy Union’s goal of making Europe a resilient, energy-independent and low-carbon economy cannot be achieved without electrifying the transport sector. 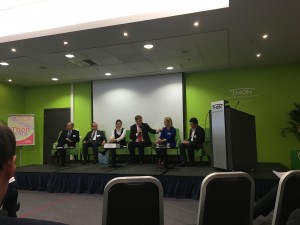 Petrouschka Werther, Acting Director at the Air Quality and Noise Department of the Ministry of Infrastructure, the Environment and Climate Change in the Netherlands, on the other hand, highlighted the key role played by public authorities in putting in place the needed regulatory framework for the uptake of electric vehicles (EVs) by drawing on the Dutch experience. Werther highlighted that while subsidies and EV incentives have been key in stimulating the EV market, they are unsustainable in the long run and the focus should thus be shifted to putting in place stricter emission performance standards for cars and vans.

Moreover, Werther warned of the ‘inevitable’ nature of the transition to electric transport, by urging the European car making industry to get off the brakes on electro-mobility and embrace it in order not undermine its competitiveness and viability.

Kitti Nyitrai, member of cabinet of Climate Commissioner Arias Cañete, confirmed Werther’s message on the need for stricter standards for fuels and vehicles to drive electrification as the closest to market alternative technology for transport.

These were the words of Olivier Paturet, General Manager, Zero Emission Strategy at Renault-Nissan, who underlined the role of electro-mobility in enhancing the integration of renewable energy in the grid via EV battery storage as well as its important contribution to boosting competitiveness and cleaner cities.

Philippe Delleur, Senior Vice President for Public Affairs at Alstom agreed that investments into electro-mobility should be further valued, through innovative R&D the already largely electrified rail-sector can share technologies in multi-modal solutions with other sectors, for example inductive charging solutions for buses.

In conclusion of the panel discussion, the admission of four new members into the platform was announced, namely the European Solar Energy association SolarPowerEurope, the European Wind Energy association WindEurope, city network Eurocities and electric car maker Tesla Motors who will enhance the platform’s voice on the EU policy making arena and contribute to accelerate sustainable electrification of Europe’s transport and energy sectors.