100 mayors gathered in Seoul, South Korea, on 9 April 2015, for the ICLEI – Local Governments for Sustainability, World Congress 2015 where they adopted the ICLEI Seoul Declaration – “Building a world of local action”. The declaration is a collaborative document setting out a path to urban sustainability and committing its signatories to undertaking ambitious action. It acknowledges that since cities account for a significant share of global CO2 emissions, they have a key role to play in reducing CO2 emissions and contributing to the implementation of a global post-2015 climate agreement. 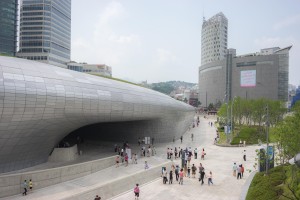 The adoption of the Seoul Declaration comes shortly after 30 European cities signed a declaration in Paris, committing themselves to use their collaborative purchasing power, amounting to approximately €10 billion a year, to buy eco-friendly products.

The ‘inter-governmental’ nature of the climate negotiations under the United Nations Framework Convention on Climate Change (UNFCCC) means that cities are not formally recognised in the process. This, however, should not prevent us from recognising that cities are an important part of the problem and can therefore play a crucial role in the solution to climate change. It is hoped that the Seoul Declaration-driven action plans will enable cities to make significant progress in the lead up to COP 21 in Paris, whilst putting pressure on national governments to reach a binding agreement.

‘Smart cities’ and ‘electromobility’ – two important concepts in the declaration

The declaration recognises cities as key drivers of the transition to a low-carbon, sustainable economy. Bellona is particularly pleased to see the document prioritising the uptake of environmentally sustainable urban mobility solutions. The declaration also commits its signatories to further enlarging and enhancing their activities under the EcoMobility Alliance.

Thanks to Bellona’s activist efforts, Norway saw the adoption of its first EV-friendly incentives in 1990 and today, 25 years later, it represents the country with the highest penetration of EVs in the world. Bellona sees EVs as one of the most promising technologies for improving local air quality, reducing CO2 emissions, and boosting energy security (read more here).