Ford Motors, one of America’s top three automakers, will move to mass produce electric cars in Russia, local media have reported, making it the first large-scale manufacturer of zero emissions transport in the country.

Published on April 9, 2021 by Charles Digges 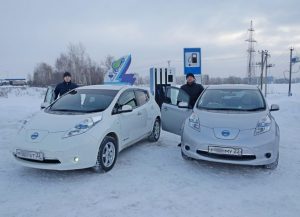 Ford Motors, one of America’s top three automakers, will move to mass produce electric cars in Russia, local media have reported, making it the first large-scale manufacturer of zero emissions transport in the country.

In a joint venture with Stollers, a Russian firm, Ford will produce an electrified version of its popular Ford Transit van at a plant in Tatarstan, in central Russia, beginning in 2022, Stollers representatives told the Kommersant newspaper, as referenced by The Moscow Times.

The move could give a significant push to the nascent electric car market in Russia, which – while still small compared to Europe – continues to see EV sales more than double on an annual basis. By the end of last year, the number of electric cars registered in the country crested 10,000, with sales increasing 71 percent over 2019 figures.

Efforts by fossil fuel-dependent Moscow in support of EV ownership have been patchy. But the last few years have seen a handful of government initiatives designed to make electric car purchases more appealing to Russian drivers. Import taxes for electric vehicles have been cancelled for 2021, significantly deflating sticker prices for popular foreign models like Tesla and Nissan Leaf.

Other regions, like Ulyanovsk and the far eastern Sakhalin, have pledged to replace their municipal fleets with electric vehicles – from city busses to the limousines that chauffer city officials around ­– within the next few years.

Rosatom, Russia’s state nuclear corporation and one of the country’s biggest companies, has likewise announced earlier this month that it will start production of lithium ion batteries for electric cars and busses.

“The market for electric vehicles and charging infrastructure in Russia is just emerging,” said Yury Sergeyev, Bellona’s senior adviser on energy and electromobility in Murmansk, said. “Major players are looking closely at the situation, waiting for signals from the state. Nevertheless, there are already a number of companies that are actively exploring the new reality.”

In that sense, the Ford Transit, a light-duty delivery van, will be a good fit. Sollers told Kommersant that it expects some 4 percent of light commercial vehicles in Russia to be electric by 2025. According to The Moscow Times, Sollers is also lobbying the government to offer electric car drivers perks like those seen in European countries – perks like toll-free travel, priority parking, better charging infrastructure and other measures that some major Russian cities are striving independently to institute.

As such, Kommersant reported that the Ford production facility in Tatarstan would not be limited to electric vans. Instead, EV production would be implemented in parallel with production of diesel-powered Ford Transits.

Still, Sollers told the paper that it expects demands for the electric Ford Transit to spike among Russia’s fast-growing online retail companies, saying that electric vans would be 40 percent more efficient and 20 percent cheaper than their diesel counterparts.

“The Paris Agreement, the upcoming introduction of a cross-border carbon tax as part of the European Green Deal, the various ambitious plans of countries and car companies to reduce the use of cars with internal combustion engines – all of this changes the existing rules of the game,” said Sergeyev.  “And everyone will have to adjust to the new reality. Russia is no exception. If we want to be competitive, we need to think about the localization of production, about new competencies, and about the state support of local companies.”