This winter, two Tesla-driving Belarusian businessmen named Artur and Viktor decided to take a trip to Murmansk by electric car. It was a daring venture. Throughout Russia’s northern expanses, electric car charging points are a rarity. 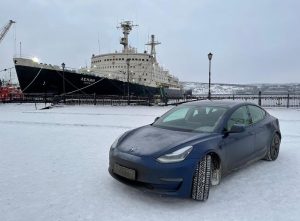 This winter, two Tesla-driving Belarusian businessmen named Artur and Viktor decided to take a trip to Murmansk by electric car. It was a daring venture. Throughout Russia’s northern expanses, electric car charging points are a rarity.

Over the past several years, Bellona has been campaigning to change that. In 2017, Bellona donated an electric car charging station to the Park Inn Hotel in Murmansk. The gift was a follow up benefit of a Tesla trek Frederic Hauge, Bellona’s president, mounted across Norway to Russia’s Arctic capital in 2014, where he had a hard time finding a place to charge his car.

A few months after that first charger started operations, the Murmansk city government and Bellona agreed to champion the EV cause together, with an eye toward enhancing charging infrastructure along the highways connecting the chilly metropolis to the Scandinavian border. Ever since, a curious and brave contingent of Russian and eastern European drivers has been testing the limits of EV batteries against in the polar extremes.

It’s a dare Artur and Viktor are familiar with. Last year the two drove their Tesla to Nord Cap on Norway’s northernmost tip. But over and over, instead of congratulations for those efforts, the two heard a dismal refrain:

“Anyone can drive around Norway in a Tesla,” they were told. “Just try doing that in Russia.”

They accepted the challenge. Part of what motivated them was the desire to smash stereotypes about how electric cars are a bad choice in cold, frosty climates. Their own experience told them such preconceptions were nonsense.

So, in January, Artur and Viktor loaded up their Tesla and headed to the village of Teriberka, the Northernmost point in the European portion of Russia near Murmansk, with the goal of celebrating Orthodox Christmas, which falls on January 7.

The first thing they had to overcome were Russia’s travel restrictions around the covid-19 pandemic, which meant flying to Moscow instead of driving. Once there, the two acquired a Tesla Model 3 Long Range with a heat pump and a 534-kilometer range.

Still, this put them 2,000 kilometers south of their goal. To cover that distance, Artur and Viktor would have to plan their route carefully, aiming for a handful of EV charging stations along the way. However, with all the careful planning, much of the trip did not go according to plan.

At the beginning, things went fine. Between Moscow and St Petersburg, covering the first 700 kilometers of the drive, high-capacity 80 kW chargers are available about every 100 kilometers, all free to use.  As Artur and Viktor progressed at a pace of about 130 kilometers an hour, it wasn’t even necessary for them to stop at most of them. But they still pulled off the road just to check them out, anyway.

“All four charging stations we stopped at work great,” Artur says in a video the two friends shot of their adventure, which they uploaded to YouTube. “They do not require cards or online registrations or passwords. It is enough to insert the pistol [in your charge port], and the system turns on automatically.”

The last rapid charging station, which offered a full battery charge in 35 minutes, was located at the 541st kilometer of Artur and Viktor’s northward journey – still some 1,400 kilometers shy of Teriberka.

By nightfall, they reached Staraya Sloboda, on the eastern banks of Lake Ladoga 260 kilometers northeast of St Petersburg, where the fast-charging stations ran out. Their only option to keep their Tesla chugging along was to connect it to a slower three-phase charger with an extension cord and wait overnight for it to charge up.

Another 180 kilometers to the north, in Petrozavodsk, Artur and Viktor found a free charging station, where they left the Tesla for three and a half hours while they took a tour of the city.

“We tried to design the route so that long periods of charging would fall either on a night’s rest, or we would combine them with excursions,” Artur told Bellona in an interview.  “If it were not for the electric car, traveling to Murmansk, we would never have visited Petrozavodsk, and we would not have discovered Kem, Medvezhyegorsk or Kandalaksha.”

Their painstaking plans began to unravel just after the two left Petrozavodsk. The travelers had calculated that they had to get to the town of Kem, 410 kilometers away, on one charge. When they got there, a recently installed three-phase outlet would be waiting for them at the Kemsky Bereg hotel, where they planned to charge the Tesla overnight before heading for Murmansk the next day.

Artur told Bellona he had banked on a speed of 90 kilometers an hour, which should have gotten the car to Kem with a little charge to spare. But the further they drove, the more the snowfall increased, and the lower temperatures plunged, hitting minus 7 ° C.

With 64 kilometers still ahead of them, and with night falling, the Tesla’s display showed they had a cruising range of only and alarming 45 kilometers remaining. So, they decided to do what electric car drivers do in such situations – they slowed down. This may delay your arrival, but it usually reserves enough battery power to get you where you are headed.

“On this improved heat pump model, we did the same thing: slow down,” Artur explains. “But our energy consumption did not fall. Heating the passenger compartment with a heat pump didn’t reduce energy consumption. When the Tesla showed a cruising range of 0 km, we still had 22 kilometers to go.” 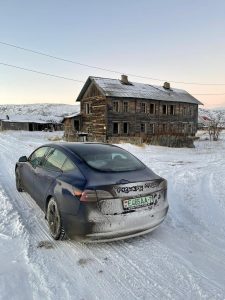 Artur and Viktor's Tesla in Teriberka.

Artur managed to squeeze another 11 kilometers out of the Tesla after that, but soon, they could go no further. The Tesla rolled to a stop in the midst of a frosty wilderness night.

Help came quickly. After roadside assistance arrived, they were able to situate a regular car battery within the Tesla’s front luggage compartment, which gave the car enough charge to steer it behind a towing vehicle with its lights flashing. Before long, they arrived in Kem, and fully charged the car during an overnight stop.

The next day, they reached Kandalashka, about 300 kilometers to the north, and within the Murmansk region, the administrative territory surrounding the city. Within Murmansk, they headed for the city’s single charging station, the one Bellona installing in 2017.

“As we planned, we spent Christmas in Teriberka,” Artur said, which is another 120 kilometers to the north of Murmansk, and where he and Viktor had to charge their car on a regular household outlet. “But it is so beautiful there, and we spent so much time driving the town through snowdrifts that we were almost on zero by the time we got back to Murmansk.”

At the end of the trip, Artur says he was conflicted about publicizing the difficulties he and Viktor had experienced when they ran out of charge before Kem. The whole purpose of their adventure, after all, was to show electric cars were perfectly well suited for use in Russia’s harsh northern climes.

“I confess I was confused, but decided to publish everything honestly,” Artur told Bellona. “People should know the truth that by owning an electric car and not calculating the range correctly, you can get into a difficult situation. I’ve been driving Tesla for six years, but this is the first time I’ve found myself in such a situation.”

Nevertheless, he sincerely recommends traveling by electric vehicles to everyone who has not dared to try them before.

“It’s a pity, of course, that in the north of Russia there are such problems with the charging infrastructure,” said Artur. “Hopefully it’s just a matter of time. But I want to say sincerely: this was an indescribable adventure. I advise everyone to try it. Just plan your charging points carefully and always keep a power reserve. ”