Russia’s Federation Council, the upper chamber of Parliament, has approved new amendments defining “political activity” in Russia’s 2012 law on NGOs, moving the broad mandate under which Russia’s non-profit sector can be named “foreign agents: on a fast track for Vladimir Putin’s signature.

Russia’s Federation Council, the upper chamber of Parliament, has approved new amendments defining “political activity” in Russia’s 2012 law on NGOs, moving the broad mandate under which Russia’s non-profit sector can be named “foreign agents: on a fast track for Vladimir Putin’s signature.

Lawmakers in the upper chamber who pushed for the bill’s passage spent much of Wednesday spinning the development at as something favorable for NGOS, if not desirable – an assertion that was contradicted by NGO leaders themselves.

The new set of amendments – which a majority of NGO leaders have told Bellona make an understanding of what “political activity is even foggier – were passed in their second and third reading in the Duma, parliament’s lower house, on Friday. 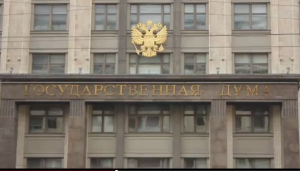 The original NGO law of 2012 stipulated that non-profits operating in whole or in part on foreign funding register themselves as “foreign agents” with the Ministry of Justice if they engage in political activity. The Ministry in 2014 was given broad powers to name foreign agents on its own.

Andrei Klishas, the Federation Council’s, head of constitutional legislation and state construction, sponsored the bill through debates in the Duma.

He told Kommersant newspaper that numerous NGOs had been consulted on the amendments while they were under debate in the Duma. The paper cited a TASS quote in which Klishas said the NGOs had “set [lawmakers] the task of steering clear of any kind of court proceedings to establish whether an organization was engaged in political activity or not.”

Klishas said he thought avoiding some court involvement would be impossible, but added that “nevertheless, there is today the [NGOs….] have an understanding that these amendments are acceptable.”

Interviews with Russian NGO leaders have shown no evidence that anything about the new amendments are even remotely acceptable, as Klishas suggested to Tass.

Further, NGO leaders told Bellona they not only didn’t push for making the new amendments indisputable in court, but that they were in fact depending on the court system to clear up myriad inconsistencies and blatant contradictions contained in the amendments.

“What we’re left with are a lot of ambiguities, peculiarities and contradictions,” said Alexander Nikitin, chairman of the Environmental Rights Center Bellona in St. Petersburg.

Artem Alexeyev, a lawyer and director of ERC Bellona couldn’t make sense of the amendments, saying first in an interview that,”ecological NGOs aren’t influenced by these changes at all – The language is aimed at those NGOs that, roughly speaking, meddle in politics.”

But he contradicted Klishas’s assertion that NGOs want to avoid settling the meaning of the amendments in court. In fact, he said courts were the only hope for settling their meaning.

“[The amendments] can be interpreted different ways,” he said. “Until it all comes into force, it’s unclear what the courts will say about political activity – the law says one thing, but the Constitutional Court [Russia’s highest] may interpret it differently.”

The Justice Ministry published its new criteria for political activity in January in a list that was so expansive the Presidential Council on Human Rights and Civil Society called them useless, and fought for their exclusion from the law.

Mikhail Fedotov, head of the Presidential Council had fought for the mutli-page amendments to be boiled down to one sentence indicating that only NGOs advocating the overthrow of the government be found afoul of the political activity clause.

The new form of the amendments, voted on by the Duma Friday, represented nearly no changes from the form in which they were published in January.