International rights watchdog Human Rights Watch has condemned the Russian Duma’s recent adoption of amendments to the country’s draconian NGO law, and has called on President Vladimir Putin not to sign them into force. 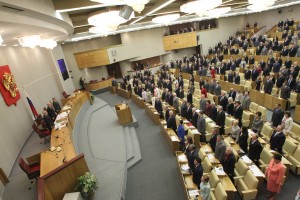 International rights watchdog Human Rights Watch has condemned the Russian Duma’s recent adoption of amendments to the country’s draconian NGO law, and has called on President Vladimir Putin not to sign them into force.

The original NGO law of 2012 stipulates that non-profits operating in whole or in part on foreign funding register themselves as “foreign agents” with the Ministry of Justice if they engage in political activity. The Ministry in 2014 was given broad powers to name foreign agents on its own.

The new amendments passed their second and third readings in the Duma, Russia’s lower house of parliament, on Friday, May 20, and were approved by the upper house, the Federation Council on Thursday.

The Justice Ministry responded in January with new criteria for political activity that were so expansive the Presidential Council on Human Rights and Civil Society called them useless, and fought for their exclusion from the law.

But for a little tweaked language and a provision granting “socially useful NGOS” a pass on getting tarred as foreign agents, observers say the new amendments have laid the bear traps even more broadly.

“[…] Putin should not sign the bill into law,” said the group in a statement Monday

Hugh Williamson, director of the Europe and Central Asia Division for Human Rights Watch said that the amendments “are an upgrade in name only.”

“The new amendments do nothing good for independent groups or to halt the erosion of freedom of association in Russia,” Williamson said. “The Russian government should stop pretending they can ‘fix’ it and drop it altogether.”

Olga Gnezdilova, a prominent Russian human rights lawyer who was quoted in the same statement, said that, under the new amendments, any attempt by an independent group to influence public policy would be considered “political activity,” regardless of the group’s mandate.

“If a charity, for instance, raises the issue of missing aid and publicly says the law needs to be changed to address it – this will automatically be considered political activity,” she said.

Alexander Nikitin, chairman of the Environmental Rights Center (ERC) Bellona in St. Petersburg agreed in recent interviews, though said the resonance of the amendments will be deeper than suggested by Gnezdilova.

Nils Bøhmer, Bellona’s executive director, said by email that the new amendments “effectively put a ban on all independent NGOs in Russia, and make it almost impossible for non-profits to take part in any democratic processes in Russia.”

Since the amendments have wended their way through the Duma, there has been a steady uptick in the number of NGOs considered “foreign agents” by the Justice Ministry, according to its online list, reaching 129 by Monday.

The original law has seen the closure of a third of Russia’s NGOs on the basis they were conducting political activity.