Twenty years ago this month, Bellona’s still nascent offices in Murmansk were raided by the FSB, the successor organization to the Soviet KGB, setting in motion a legal Rube Goldberg machine that led to treason allegations against the Bellona’s Alexander Nikitin, and charges against the Bellona itself.

Published on October 12, 2015 by Charles Digges 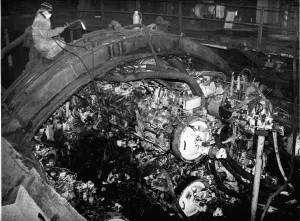 Twenty years ago this month, Bellona’s still nascent offices in Murmansk were raided by the FSB, the successor organization to the Soviet KGB, setting in motion a legal Rube Goldberg machine that led to treason allegations against the Bellona’s Alexander Nikitin, and charges against the Bellona itself.

But, the group again faces a vague future after it was declared in March to be a “foreign agent” by Russia’s Justice Ministry, showing that official spy-mania directed against non-profit groups demanding transparency on nuclear and environmental issues is again on an upswing.

On Monday, it surfaced that the group would be forced to stop operating as an NGO, and group chairman Andrei Zolotkov confirmed that Bellona Murmansk was “at a cross roads” and that its eventual liquidation as a non-profit had been announced as early as April.

Bellona Executive Director Nils Bøhmer confirmed Monday that as of Monday Bellona Murmansk is no longer a Russian non-profit, but would still continue its present functions under different auspices.

“Bellona Murmansk will continue its work under a different kind of bureaucratic structure that will free it from the yoke of being branded a foreign agent,” said Bøhmer. “It is yet another challenge the group has had to face, but we are again rising above it and we are still doing the hard work of enumerating radiation threats in an atmosphere that is hardly conducive to transparency.”

Uncertainty is a familiar cloud under which the group has has always operated and Zolotkov was quick to point out that Monday’s developments were not a surprise.

The first ransacking by the FSB

The work that put the organization on the map was its collaborative report entitled The Russian Northern Fleet: Sources of Radioactive Contamination, writen by Igor Kudrik in Murmansk, Thomas Nilsen, an expert on the Russian Navy formerly with Bellona’s Oslo office, and Nikitin, then a retired Russian submarine captain and nuclear safety inspector. He is currently the chairman of the Environmental Rights Center Bellona in St. Petersburg.

The report’s revelations were astonishing to the West, and established for the first time that the end of the Cold War had done nothing to mitigate the possible dangers of some 200 decommissioned and rusted out nuclear subs bobbing precariously at dock-side, still loaded with nuclear fuel at bases surrouding Murmansk.

Niktin, Kudrik and Nilsen’s research didn’t pass without attention. On October 5, 1995, the FSB launched a coordinated series of raids on the office, the homes of its employees and an interrogation of Niktin and Sergei Fillipov, who, along with Kudrik, staffed the Murmansk office. 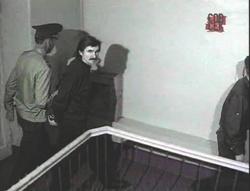 The puzzle of the raid

In a recent interview Kudrik recalled that he hadn’t even connected the raid on the office and residence with the preparation of the incendiary report.

”I was unsure what was going on and didn’t link it to our report in the first place” he said via email. At about 5pm that day, his parents phoned him to say their apartment had been searched by the FSB. At about the same time, he heard Filippov, who had been en route to the home office in Oslo, had never arrived.

“I got frightened and all shaky when my parents told me the FSB had been to their place,” said Kudrik, though as time passed so did the fear. “Afterward, I was just extra angry.”

One of the items they took from Kudrik’s parents’ apartment, he recalled with humor, was his computer with the newest update of the videogame Warcraft. “By the time I got [the computer] back, the game was old and outdated,” he said.

But both at the office and with Filippov and Nikitin, further south in St. Petersburg, far more serious things were afoot.

Nilsen said in an interview that when Filippov failed to turn up in Oslo, he called the Murmansk office and a stranger picked up the telephone. The man explained his presence to Nilsen by saying “Oh, I am just [here] to close an open window.”

“I understood something was wrong,” said Nilsen, “But not what.”

Later on the evening of that October 5, one of the FSB’s dreaded black Volgas had turned up at Nikitin’s apartment. Six FSB agents knocked on his door and produced a search warrant, and asked him if he had any firearms, narcotics or ammunition. Nikitin’s wife and daughters were forbidden from using the telephone.

The search continued until the morning. Nikitin’s passport, driver’s license and even his money were taken, and he was packed into the Volga and driven to St. Petersburg’s FSB headquarters for a full night of interrogation. 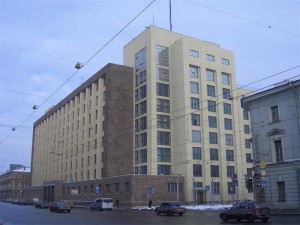 While Nikitin was led through the darkened halls of what Petersburgers refer to as the Big House, he chanced to meet Filippov, who was being allowed a bathroom break by his interrogators. He had been stopped from boarding his Oslo-bound flight and brought in for questioning himself.

Of his first interrogation, Nikitin said, “I conducted myself like people who have wound up in the KGB’s offices and are convinced they got there as the result of some misunderstanding and that now, they must only explain the truth so the misunderstanding can come to and end.”

He was subjected to meandering questioning concerning his birth country of Ukraine, his friends and family and his work with Bellona while the FSB questioners treated themselves to liberal amounts of vodka.

It was the first of hundreds of such interrogations that would last the entire five years his case, until he was finally acquitted of espionage charges by the Russia’s constitutional court in 2000 – making him the first person ever to beat KGB-levied espionage accusations.

When Nikitin returned home after that first interrogation, his wife was cleaning up the ransacking the agents had subjected the apartment to. The search had turned up documents relative to the Bellona report and had been confiscated as evidence.

That morning, Nilsen received a call from a Murmansk-based journalist who told him Bellona Murmansk’s office had been turned inside out by the FSB.

”They confiscated nearly everything,” said Nilsen.

Specifically, said Nilsen, the draft text of the nuclear report had been taken, as well as all documents, books, newspapers and other official reports it referenced.

Nikitin added that during the investigation, both he and Nilsen and Kudrik – if not somewhat naively – continued to deliver any other documents relative to the report whenever the FSB requested.

With Bellona Murmansk’s liquidation as an NGO becoming official on Monday, it’s clear that Russian authorities bear long-running resentments when it comes to organizations working to improve the country’s nuclear and radiation safety.

Another recent victim of this drive is Nadezhda Kutepova, and her anti-nuclear NGO in the close nuclear town of Ozersk. Once her organization, Planet of Hopes, was placed on the foreign agent list in July, she fled for political asylum in France as it became clear the FSB was drawing up treason charges against her. She liquidated her group late last month.

In June 2014, the anti-nuclear group Ecodefense was tarred as a foreign agent for protesting the construction of the Baltic Nuclear Power Plant. Its co-chair, Vladimir Slivyak, has said his group has for over a year ignored mounting fines for refusing to register as a foreign agent because his group doesn’t act as one.

That’s an across-board-complaint issued by most of the 94 NGO’s currently listed as foreign agents by the Justice Ministry, and Anna Kireeva of Bellona Murmansk is no exception.

“We have never been working as foreign agents, and were never involved in political activity. But it is absolutely impossible to operate as a foreign agent NGO in Russia,” she said in an interview. “People who say ‘register as a foreign agent and continue working’ have no idea what they’re talking about,” she said, adding: “That is why Bellona Murmansk as a ‘Russian NGO fulfilling function of a foreign agent’ was closed. But Bellona will continue to be present in Murmansk.”