Nadezhda Kutepova, the prominent head of a Russian NGO that protects the rights of victims of radiological disasters, has fled the country with her children and applied for political asylum in France.

Published on September 22, 2015 by Charles Digges

Nadezhda Kutepova, the prominent head of a Russian NGO that protects the rights of victims of radiological disasters, has fled the country with her children and applied for political asylum in France.

Kutepova, 43, who has kept her whereabouts under wraps since she left Russia in July, told Bellona Monday that she abandoned her home on the advice of her lawyer, renowned human rights attorney Ivan Pavlov, and the Paris-based International Federation for Human Rights (FIDH), who both say she could face treason and espionage charges brought by Russia’s secret services.

NGOs receiving foreign funding across Russia have been trampled by a witch-hunt mentality from the Kremlin, which is burying them in court costs or driving them into closure.

But Kutepova represents the first known case where the possibility of charging an NGO leader with treason and espionage has been considered.

A duty officer at Moscow’s Federal Security Service, or FSB – the KGB’s successor organization – refused to comment to Bellona on what he said was “an ongoing investigation.”

Nils Bøhmer, Bellona’s executive director, said, “This is something we have feared for some time [in connection with Russia’s NGO law] – that Vladimir Putin would again play the espionage card.”

Bellona’s Alexander Nikitin, a former submarine captain who was charged with treason and espionage in 1996 for collaborating on a Bellona report detailing the dangers of Russia’s Nuclear Navy, remains the only person to every face and beat such accusations from the FSB – a legal battle that dragged for four years. But those were very different times.

“Unlike that victory,” said Bøhmer, “when Nikitin was fully acquitted in 2000, we are quite sure that a fair trial and acquittal [on treason charges] would not be possible in Russian in 2015.”

Nikitin himself said that levying treason charges has been made all the easier in recent years by changes in Russian security laws, turning them into banana peels any journalist, environmentalist  could slip on. This is doubly so for anyone living or working in a closed nuclear city, like Kutepova’s hometown of Ozersk, where local affairs are dictated by the defense and security services.

Because of this, Nikitin said she was in a “zone of special risk.”

“People living in these cities are  walking a razor’s edge and risking a charges of espionage – and that was especially so for Kutepova,” he said. “There are too many reasons [provided by the new security laws] to charge her with treason.”

In June, Kutepova’s 15-year-old group, Planeta Nadezh – based in Ozersk, home to the notoriously radioactively contaminating Mayak Chemical Combine – was fined 300,000 rubles ($6,000) by authorities for failing to register itself as a “foreign agent” under Russia’s harsh 2012 laws on NGOs. The fine money, which Kutepova told Bellona she doesn’t have, is due September 28.

Kutepova has began to liquidate the group.

Her home was shown on local Kremlin-friendly media in broadcasts that accused her of being a spy. Local newspaper articles began circulating comments from the administration of Ozersk – which is made up of former FSB officers – hinted they would like to see her charged with espionage and treason. 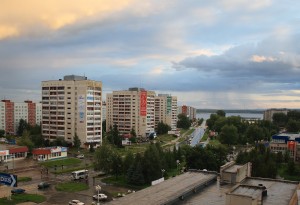 “After these publications, I agreed on the recommendation of Pavlov and the FIDH to buy tickets and leave,” Kutepova told Bellona.

The preparations included packing up her children – her two sons who are 14 and 10, and her daughter, who’s seven.

“We gathered our things in a terrible hurry – packing four people is no easy task,” she said. “I was sobbing the whole time – I couldn’t believe this was happening, and felt myself a traitor for leaving those people I have been defending.”

Because of this, she says she daily fights the urge to return to Russia and resume her work, regardless of the consequences.

Settling into life in a foreign country has not been easy. Kutepova’s eldest son had to leave behind studies as a prestigious high school. The family has bounced from home to another six times, only recently finding more stable dwelligs. But one of her son’s documents have gone missing in the peregrinations, and other of their personal effects from home are got lost in the moves as well. Her middle son, she said, is taking the transition in stride. But her young daughter longs for Russian-speaking school and playmates.

For herself, she says “It seemed to me that I was sleeping and would wake up and find everything in its place.”

“Now, I have come to believe the reality of the situation and am trying to settle in – whatever you do you have to keep living,” she said.

Planeta Nadezhd’s mission began by advocating for those affected by the 1957 Kyshtym disaster in which a tank storing nuclear weapons production waste at Mayak exploded and dispersed radionuclides over hundreds and thousands of square kilometers in Russia’s Chelyabinsk Region. 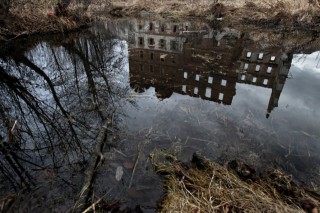 Those with birth defects and chronic illnesses still epidemic in the region because of this disaster – considered my many environmentalists to be Chernobyl’s older brother – still go uncompensated by Federal government and Chelyabinsk regional officials. Kutepova has been their single and most reliable ally.

The ongoing operations of Mayak as Russia’s only nuclear fuel reprocessing facility have led to a host of other environmental and human health crises that Kutepova has taken on along the way.

The nuclear facility has since the middle of the last century dumped radioactive waste into nearby water bodies like the Techa River and Lake Karachai, turning the area’s main irrigation sources into radiological disaster areas.

This has put numerous villages and town along the river in the direct path of a radioactive deluge – towns Kutepova insists need to be evacuated, but to which the government continues to turn a blind eye. 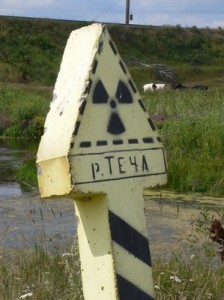 An aged radiation sign on the banks of the Techa River. (Photo: Bellona) Photo: Ecodefense

Kutepova therefore says she’s determined to find some way to continue her work from France.

Among those things she would most push for relative to Mayak is to resettle the some 7,000 people in villages along the radioactive streams of the Techa River. She said further that the Techa River itself must first effectively be cordoned off with signs and fences as a radiation hazard.

Those who live along the Techa must also be granted official status as victims of radiological illnesses, as well as those who evacuated the area under their own power.

Finally, she would like to see employees of Mayak itself accorded rights to compensation for working in what is largely regarded as one of the most radioactively contaminated places on earth. Laws would have to be changed to accommodate this, but Kutepova wants to see Mayak’s employees’ rights observed.

Planeta Nadezh was initially forced onto the Justice Ministry’s foreign agency registry on April 15 for receiving a $44,188 grant from the from the US-based National Endowment for Democracy in 2008, four years before the NGO law even took effect. 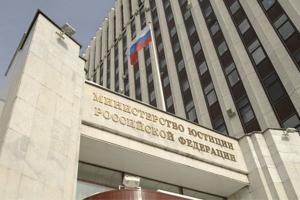 The law stipulates that NGOs who receive foreign funding and engage in vaguely defined “political activity” must declare themselves foreign agents, a term associated in Russian with spying.

As of September 22, the Justice Ministry has listed 93 foreign agents, 14 of which deal with ecological issues. Those organizations that focus on nuclear issues are especially vulnerable.

Russia’s Ecodefense was in June 2014 tarred as a foreign agent by Russia’s Justice Ministry. The group had led active and successful protests against the building of the Baltic Nuclear Power Plant.

The group’s co-chair, Vladimir Slivyak, told Bellona that the Justice Ministry considered protesting Russian nuclear power plants to be a protest against the state itself. Courts levied fines against the group for failing to register as a foreign agent, but Slivyak said he has and will continue to ignore the fines.

Bellona Murmansk was in March 2015 forced onto the foreign agent list. As Bellona’s first office in Russia, it has played a vital role in channeled billions of dollars into international funding to dismantle Northwest Russia’s Soviet nuclear legacy.