In self-immolation by Olympic torch, Putin gives NGOs millions and may pardon punkers and activists

Russian President Vladimir Putin over the past several days has engaged in a series of moves that appear to be geared toward earning him some angle’s wings this Christmas season, and would appear to redress some of the bigger human rights botch jobs of his administration.

Published on December 11, 2013 by Charles Digges 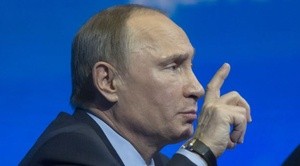 In other words, the time has again come for migraine-inspiring speculation about what payment will be exacted by the Kremlin for its seemingl humanitarian gesture.

Yesterday, Putin submitted an amnesty request to Parliament that has the potential to free the still jailed members of the punk collective Pussy Riot, and the so-called Arctic 30, the 28 activists and two journalists who were arrested for their protest of oil drilling in the Arctic.

The bill, submitted to the Duma by Putin himself, is meant to coincide with the 20th anniversary of the Russian Constitution, adopted on December 12, 1993. The Duma began considering the bill immediately on Tuesday. The Duma’s four political factions all pledged that they would support the amnesties Putin proposes, The Moscow Times reported.

The amnesties could begin as early as this month. Duma Legislation head Pavel Krasheninnikov told the Itar-Tass newswire, as quoted by the paper, that the amnesty bill would be reviewed and voted on by Dec 21.

Putin is further dispensing largesse to Russia’s down trodden NGO community – a community he has spent much of his presidency dismantling – by dispersing some $15 million in state funding through 2015 to many of the civil society organizations that were, at his behest, harassed and raid by prosecutors under the “foreign agent” law, including Bellona.

All of these issues brought a thunder of international criticism down on Putin’s head, and he was seen in the West as ushering in a new era of cloistered quasi-Soviet paranoia.

Putin further issued a decree closing down the gargantuan state owned RIA Novosti news agency – known for its Kremlin bootlicking, obsequious coverage, and censorship – and ordered the creation in its place a new international broadcaster.

The catch here is that the new station will be headed by even more aggressively pro-government television host Dmitry Kiselyov, described by Bellona Russia Group leader Vladislav Nikiforov as “Russia’s Goebbels” in reference to Hilter’s minister of propaganda.

Kiselyov recently distinguished himself by telling a national television audience (in Russian) that homosexuals should be “buried and burned” to prevent donation of their organs as part of Moscow’s new drive against gay Russians and its recently-passed law banning so-called “homosexual propaganda.” He is also notorious for sputtering his support of Stalinist politics. In an interview with Voice of Russia, which will be absorbed by the new propaganda channel, Kiselyov said his mission at its helm would be to “restore a fair attitude toward Russia in every country of the world.”

The bill for Putin’s spate of mercy, in other words, may be an egregious, greasy, self-serving, unapologetically intolerant and nationalist world-wide broadcaster.

RIA Novisti, prior to its dissolution yesterday, was Russia’s official media outlet for the upcoming, controversial Sochi Winter Olympics. It’s unclear whether the new agency will maintain that contract.

One thing for sure, noted Alexander Nikitin, chairman of the Environmental Rights Center (ERC) Bellona, is that all of this seemingly humanitarian activity certainly looks good before the Sochi Olympics – dubbed by Putin as the showcase of the “Modern Russia.”

The Kremlin-friendly Izvestiya newspaper said the amnesty bill submitted to the Duma by Putin would apply in it’s legal breadth, to Pussy Riot members Nadezhda Tolokonnikova and Maria Alyokhina, who have been sentenced to two years in prison on hooliganism charges for their irreverent 2012 anti-Putin protest at Moscow’s Christ the Savior Cathedral. Their prison camp term is scheduled to end in March.

The 30 Greenpeace activists arrested in October, now free on bail and awaiting trial for “hooliganism” for their attempt to hang protest banners on an Arctic oil-rig owned by state energy monopoly Gazprom, would also be amnestied.

The legislation does not contain explicit names of those to be set free. But according to Vladimir Vasilyev, deputy speaker of parliament, 25,000 people would be freed by the Putin Amnesty, Russia Today quoted him as saying.

The amnesty is not for violent criminals, according to Vedomosti, another paper the legislation was leaked to, but rather convicts in vulnerable social categories and people who have served the country – all minors, mothers with small children, pregnant women, women over 55 and men over 60, the disabled, Chernobyl cleanup workers and military veterans. Band members Tolokonnikova and Alyokhina both have young children.

According to Vedomosti, the draft amnesty covers three articles of the criminal code “as an exception” meaning those convicted under them, will be freed or relived from punishment. The first article discarded under the amnesty draft is article 213 – hooliganism – meaning Greenpeace and Pussy Riot should get pardoned.

The bill will have to pass three readings in the Duma and be approved by its upper house, the Federation Council, before it becomes law. Because Putin’s party of power, United Russia, holds sway in the Duma, opposition would be surprising.

The results of the tender for state funding of NGOs were announced last Friday. Funds are now being distributed to numerous organizations that had fallen under the heel of the Duma law stipulating that all NGOs that receive foreign funding and engage in vaguely defined “political activity” must register themselves as “foreign agents.”

The law drew the wrath of Russia’s NGO community and only one organization, a small legal advisory body in St. Petersburg, registered as a foreign agent. All other’s boycotted registration.

One organization, the Golos vote-monitoring agency, was ordered to pay a $13,500 fine for not registering as a foreign agent.

Golos’s work in uncovering massive vote fraud during the December 2011 Duma elections – which led to some of them most massive street protests Moscow as seen this century, casing a pall on Putin’s authority – is widely assumed to have been the original target of the foreign agent law.

Hundreds of other organizations strained under the prosecutorial inspections to fight fines levies by municipal authorities that were in some cases higher than the fine for not registering as a foreign agent. Bellona fought off $20,000 in fines for alleged health and fire code violations.

Ironically, Vedomosti reported that the Urals division of Golos received the single largest state funded grant from the tender, totaling 7 million rubles, or $214,000.  The grant to Golos is for monitoring voting activities prior to the 2014 Duma elections, said the paper.

Other organizations the Kremlin singled out for raids or prosecution under the foreign agent law, and which received hefty state grants, include Moscow Helsinki Group, the Union of Soldiers’ Mothers Committees, Memorial Society, the Agora Association, and For Civil Dignity, according to For Civil Dignty’s head, Ella Panfilova, which she posted on the group’s website.

The state grants for NGOs where established after the foreign agent law came into effect in November 2012, ERC Bellona’s Nikitin said. According to Niktin, Putin’s rationale was that if the state did not take up the slack in funding NGOs, the would continue to turn to Western funding sources – constituting a continued threat of foreign influence in Putin’s world view.

Many, however, are asking why Putin would undo so much of the stitch-work he has so carefully been embroidering since he was sworn in for his third presidential term in May 2012.

According to Nikitin and Bellona General Director Nils Bøhmer, it all boils down to the harsh international spotlight of the 2014 Sochi Winter Olympic games, which have become a flashpoint for violations of environmental rights, the rights of journalists, free speech, and the rage of the international gay community.

“The Olympics, of course, are influencing what is going on right now with the grants and the amnesty, which is inches from happening,” said Niktin. “The cases of Pussy Riot and Greenpeace will most likely be covered by the amnesty.”

“They will try to address and sweep under the carpet all of these internationally sensitive issues prior to the Olympics,” he said.

The shuttering of RIA Novosti elicited panicked cries from the agency itself, which published an impassioned plea for the freedom of the press.

“The move is the latest in a series of shifts in Russia’s news landscape, which appear to point toward a tightening of state control in the already heavily regulated media sector,” The Moscow Times quoted RIA Novosti as writing.

The newspaper reported that Sergei Ivanov, Putin’s chief of staff, said the shutdown was based on financial grounds, but confirmed that it would be replaced by a news organization called Rossia Segnodnya, or Russia Today.

Vladimir Slivyak, co-chair of Ecodefence, said the reorganization of RIA Novosti was an obvious attempt to reign Russian media in even closer to the Kremlin, though the agency had done little to distinguish itself as a voice of democracy. He asserted that any tears spilled over its loss were sanctimonious.

“RIA Novosti, oh, what a loss, so many sympathizers – just yesterday, many sympathizers considered the agency and instrument of Putinist propaganda and strict censorship,” wrote Slivyak in a Facebook posting. “Today, RIA Novosti has magically turned into the standard of journalism, the bulwark of free speech which mercilessly swatted at authority.”

Lev Parkhmenko, a producer and media observer with the independent internet television station TV Rain, agreed with Slivyak, saying that Putin had been seeking to draw the media closer to his chest since his third term began. He said the reorganization was no surprise.

As host agency of the Sochi Olympics, RIA Novosti’s reorganization make unclear what station will be Russia’s domestic voice on the Games. The Moscow Times reported that an International Olympic Committee  (IOC) representative had said it is aware of Putin’s decision. The paper quoted the representative as saying that the IOC “understands [the reorganization] would not impact the Games’ operation.”

In sum, TVRain’s  Parkhmenko concluded there’s nothing terribly unexpected about the picture – so long as it tunes in the Olympics clearly.