KIRKENES, Norway – Norwegian Prime Minister Jens Stoltenberg said that the development of civil society and non-governmental organizations is critical to full cooperation in the Barents region – his strongest statement to date in support of Russian NGOs since a massive crackdown on them began in March this year. Stoltenberg’s counterpart, Dmitry Medvedev, however, did not share his view.

Published on June 4, 2013 by Anna Kireeva, translated by Charles Digges

“It is especially important that ecological organizations have the possibility to work in peace,” said Stoltenberg during the final press conference at the Barents Summit. “This work brings many practical results and is very important for Barents cooperation – I am glad we had a chance to discuss this aspect with my Russian colleague.”

But Medvedev had a very different take on what the discussion Stoltenberg was referring to had meant.

“Contact between people of our countries, so-called ‘people-to-people cooperation,’ can develop without the participating of NGOs,” said Medvedev. “Civil society is maybe an important theme, but not the number one concern, and hardly ever will be.”

Nonetheless, earlier the same day, all sides had come to agreement on Barents cooperation, which they fortified in the Barents Declaration. The document clearly spells out that: “Cooperation in the area of developing civil society plays an important role in the advancement of ideas about sustainable development and the establishment of contacts among citizens. We support deepening near-border contact and cooperation between NGOs, youth organizations and the media.”

“I am getting the impression that Medvedev doesn’t entirely understand the role of NGOs in a well organized society,” said Nils Bøhmer, Bellona’s general manager. “The role of NGOs is to ask critical questions of government so that society develops along democratic lines.”

“If NGOs are excluded from the sphere of government competence, a critical view of the situation will be lost,” Bøhmer continued.

According to Vitaly Servetnik, an activist with the Kola Ecological Center, there was nothing surprising in Medvedev’s lack of vision over the necessity of NGOs.

“Of course he doesn’t see a role for NGOs in trans-border cooperation, or is even afraid – and it must be said not only in civil society but in any critique at all,” said Servetnik. “It’s sad that the prime minister is ignoring even the economic side of NGO cooperation – a huge amount of financing has been drawn into the economy of Northwest Russia through just such cooperation,” Servetnik continued, adding, “This money went to increasing radiological and nuclear safety specifically in the Murmansk Region, and this problem was raised at an international level by ecological NGOs.”

“It also sad that Medvedev doesn’t see the perspectives for NGOs and civil society, or doesn’t want to see it,” said Servetnik.

Norwegian journalists asked Medvedev to guarantee that the new law governing NGOs in Russia that requires them to register as “foreign agents” if they receive foreign funding and are engaged in vaguely defined ‘political activities would not hamper cooperation between Russia and Norway.

“That which implements monitoring of Russian organizations is the internal business of Russia, whoever likes that nor not,” said Medvedev. “So far, nothing supernatural has occurred. I don’t think this law can negatively impact cooperation between our countries.”

The Russian prime minister also said that NGOs are needed when the government and experts lack competence in certain issues.

“Any legislator is obligated to follow the administration of laws,” said Medvedev. “If we see that a law is reasonable and works for the benefit of the citizenry, [the law] must be preserved, but in our experience there have been incidents when laws have been changed when necessary.” 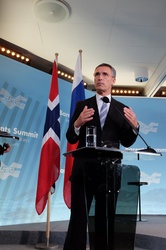 In what direction Russian legislation is changing is witnessed by the fact that Medvedev’s own government gave the go-ahead to the Ministry of Justice to develop amendments to Russia’s NGO laws, establishing additional grounds for monitoring non-governmental organizations.

Russia’ cabinet of ministers, headed by Medvedev, would like to allow unannounced sweeps of NGOs that are based on claims against them by ordinary citizens or entities, as well as any claims made in the media, the Novy Region newspaper reported.

The government’s legislative commission has approved a draft amendment to the NGO law giving the authorities these additional grounds on which to carry out unscheduled inspections of nongovernmental groups that violate Russian law, the Justice Ministry said Tuesday, according to The Moscow Times.

According to the draft amendment, checks can be undertaken if violations are not fixed within time limits set by the authorities or if signs of extremism within an organization are reported.

Such information can range from claims made by ordinary individuals, businesses and the media alleging extremism, or even the appearance of extremism or legal violations of Russian legislation in the activities of a given NGO, the cabinet of ministers’ press office said. The unannounced raids can be carried out on the order of the president, the government or by demand of prosecutors.