Prosecutors in St. Petersburg again refused to provide the Environmental Rights Center (ERC) Bellona’s executive director, Nikolai Rybakov, with any information concerning the disposition of a number of so-called administrative violations levied against the organization in connection with Russia’s ongoing nit-picking of NGOs under an onerous new law. 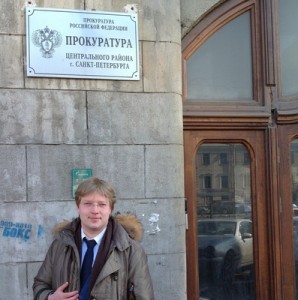 Rybakov has been summoned to the prosecutor’s office in St. Petersburg more than a half dozen times since an unannounced raid on ERC Bellona’s office on March 21 by prosecutors, which allegedly revealed code violations that could amont to $20,000 in fines.

Last Monday, the prosecutor’s finally released their complete list of accusations against the organization in written form and gave it to ERC Bellona’s lawyer, Artyom Alexeyev.

The six-page long letter of dense legalese detailing supposed fire and health code violations stipulated that ERC Bellona had 30 days beginning with the receipt of the letter to address the violations.

The letter was also accompanied by an order that Rybakov appear at the prosecutors’ office today, Monday May 13. Rybakov, upon receiving the letter, sent 76 pages of documents back to prosecutors that refuted every accusation they made in their dispatch. This 76 pages is an addition to the 15 tomes of documents already turned over to prosecutors following the late March raid.

Despite the invitation, Rybakov was again turned away by prosecutors with no information but the instruction that ERC Bellona Chairman Alexander Nikitin appear at their offices to discuss the administrative charges detailed in their accusations.

Rybakov confirmed that Nikitin had been asked to attend Monday’s meeting, but was unable to do so because he was in international transit back to Oslo.

Rybakov also said that ERC Bellona’s charter stipulates that Nikitin is the responsible party for dealing with issues such as administrative fines, which raises questions about why prosecutors have been continually summoning Rybakov, only to turn him away.

Bellona’s general manager Nils Bøhmer and Russia Group leader Vladislav Nikiforov on Monday meanwhile held meetings at the office of Norway’s Minister of Foreign Affairs in an effort to attract government attention to the ongoing plight of ERC Bellona.

ERC Bellona and other NGOs in early April met with Norwegian Prime Minister Jens Stoltenberg, who was in Russia on a state visit and who promised to pass his concerns on to Russian Prime Minister Dmirty Medvedev.

The sanctioned scrutiny of NGOs

Since late March, a wide array of Russian authorities, ministries and federal agencies have been conducting raids on NGOs, trying to reveal administrative violations that can be very fluidly and arbitrarily interpreted – and lead to crippling fines.

Some 600 Russian NGOs have faced similar unannounced inspections and are one by one being charged with administrative violations.

The raids, Nikitin has said, are tied to Russia’s new law requiring NGOs that receive foreign funding and engage in the law’s vague definition of “political activity” register themselves as “foreign agents” – a term that harkens back to Stalin-era accusations of espionage.

NGOs across the board refused to register as foreign agents after the law, which was rushed through the Duma last summer, took force in November.

On April 25, Golos, the vote monitoring agency that revealed widespread fraud meant to favor the Kremlin backed Untied Russia party in December 2011’s Duma elections, became the first organization to be fined $13,000 for not registering as a foreign agent.

The group has protested the ruling, saying it has received no foreign help since the new NGO statutes took effect. It even went so far as to return the $10,000 Sakharov Freedom Prize awarded to it by the Norway Helsinki Committee.

Another group called Crane Homeland, an ecological support group that runs a protected site for rare cranes and storks in the Amur region was last week skewered by the new because it hadn’t registered as a foreign agent, RIA Novosti reported.

The group told the agency it was “outraged” as it doesn’t engage in anything remotely resembling political activity.

Russian prosecutors have also been busily handing out so-called notices of violation of the foreign agent law to dozens of other organizations, such as the anti-corruption agency Transparency International and the Memorial Human rights group.

At the beginning of this month, the government began targeting ecological groups with these notices of violation and by last count, according to Greenpeace, 30 plus environmental organizations are being harassed into registering as foreign agents under the new law. Neither Greenpeace nor Bellona have yet been targeted by such a notice yet.

The administrative charges the prosecutors allege against ERC Bellona have mainly to do with the health and fire codes, and were characterized by Alexeyev, ERC Bellona’s lawyer, as “ an entire catalogue of violations, the majority of which are fantasies of the regulatory bodies.”

One exotic claim prosecutors allege is the epidemiological and radiation hazards posed by spending more than 50 percent of work time in front of a computer. Prosecutors said ERC Bellona had failed to compel employees to receive regular chest x-rays and photo flourograhic exams in keeping with Russia’s labor codes on “arduous labor conditions.”

He further furnished independent documentation that air quality, electromagnetic fields, artificial lighting conditions, vibration, noise, evel of positive and negative air ions in the office’s air, and the content of harmful chemical substances present in the office’s atmosphere were well within specifications.

ERC Bellona has also rectified, or is in the process of rectifying any fire code violations. Originally cited on March 19 as having too few fire extinguishers, the organization has now purchased on for every room in the office.

It is also working to bring its fire alarm up to specification after fire alarm regulations changed after ERC Bellona took occupancy of its office on Suvorovsky Prospect in 2007. The engineering and installation of new equipment costs some 100,000 roubles ($3,200).

Rybakov also documented that the organization has well displayed fire evacuation instructions; something the fire inspectorate alleged was not the case in its March raid.

Nikitin is expected to schedule a trip from Oslo to meet with St. Petersburg prosecutors sometime this week.