Norwegian Prime Minister Jens Stoltenburg today met with representatives of the Environment and Rights Center (ERC) Bellona to discuss onerous fines the Russian Prosecutor General is hinting it will levy against the organization and the situation of Russian NGOs in general.

Published on April 5, 2013 by Charles Digges 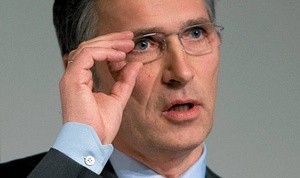 The meeting, which took place at the Norwegian consulate, comes quickly on the heels of a meeting ERC Bellona’s Executive Director Nikolai Rybakov had with prosecutors on Wednesday, where they hinted ERC Bellona could be fined some $20,000. Prosecutors said then that they were still compiling evidence and told Rybakov a final decision on the fine would be made next Wednesday.

Rybakov said that Stoltenberg, who is in St. Petersburg to attend the meeting of Baltic Sea Countries later on Friday, promised to bring up the concerning situation of Russian NGOs with Russian Prime Minister Dmitry Medvedev, who is also attending the meeting.

Bellona’s General Director Nils Bøhmer in Oslo said that, “It is vitally important that Prime Minister Stoltenberg take a vigorous position defending not only Bellona’s work, but the work of thousands of other NGOs in Russia.”

“We are not spies,” he added. “Our work is centered on 20 years of supporting Russian citizens’ rights to a clean environment.”

A month of ‘unannounced inspections’

ERC Bellona is just one of thousands of NGOs that have been swooped on by a variety of Russian official bodies from the tax inspectorate to health and fire officials over the last month, apparently as part of a new enforcement effort of Russia’s new laws requiring civil society organizations engaged in vaguely defined “political activity” to register with the Ministry of Justice as “foreign agents.”

The law, which was passed in a rush over the summer, came into force in late November – but initially seemed to have little impact on NGOs, who for the most part boycotted registering as foreign agents with the Justice Ministry.

Even those who did want to register were turned away, as the Justice Ministry said it did not have the resources to investigate each NGO in the country.

Russian President Vladimir Putin later turned enforcement of the law over to the Federal Security Service, or FSB, the successor organization to the KGB.

But several organizations that are not engaged in political activity, like ERC Bellona, have fallen under the Kremlin’s heel.

ERC Bellona’s Rybakov and energy projects coordinator Ksenia Vakhrusheva were present at the meeting with Stolenberg this morning, as was a member of Greenpeace Russia.

Vakhrusheva said Stoltenberg first met with ecological organizations, and held separate meetings later in the morning with human rights groups who are being badgered by Russian authorities.

“In all I think it was good that the meeting took place,” said Vakhrusheva. “We focused on describing our main work and the situation with inspections of NGOs as a whole.”

Vakhrusheva said Stoltenberg acknowledged the problems the new law on NGOs is causing civil society in Russia, and promised to keep pressing the point in all high-level meetings he has with the Russian government.

According to Vakhrusheva, Stoltenberg said that Russian officials “constantly need reminding” about promises they make.

Alexander Nikitin, ERC Bellona’s chairman sent Rybakov to the meeting with a list of assertions that Niktin wanted to make sure the Norwegian Prime Minister had in hand.

Among the items Nikitin listed where that ERC Bellona had been targeted first in the sweeps in St. Petersburg. Nikitin also emphasized that other ecological organizations were more or less left untouched by the unannounced inspections.

Nikitin also wrote that the inspections are “without a doubt being used to chase organizations into ‘foreign agent’ status,” and that Bellona would never accept the moniker of “foreign agent.”

He also wrote that while ERC Bellona is supported by Bellona’s Oslo office and other foreign funds, that much of its energy work was funded by Russia’s state nuclear corporation Rosatom.

Nikitin’s note to Stoltenberg concluded that “we cannot and will not pay bribes – but we are risking being closed.”

Environmental cooperation between Norway and Russia

This is also a position Bellona has long advocated, asking that Statoil sever the agreement it made with Rosneft – which is historically known for its low environmental priorities – in May.

Fines hanging in the balance

Rybakov said he was not sure if the meeting with Stoltenberg would have any effect on the $20,000 fine ERC Bellona may face when next it meets with prosecutors on Wednesday, April 10,

But in earlier comments to the Moscow Times, Rybakov said that the fine, if assessed would place ERC in real jeopardy.

“Such a fine would close practically any NGO in Russia,” Rybakov told the paper, adding that Bellona couldn’t be obliged to register as a foreign agent because it solely promotes environmental preservation.

Nikitin, however, added that handing down crippling fines to thousands of NGOs would open a pandora’s box of court appeals.

“I am not sure the Russian judicial system could handle such an influx of legal action,” he said. “But if we are fined, we will fight it in court for as long as it takes.