The massive protests against the government througout last winter and spring did not fall on fertile soil with Russian President Putin. The boot crushing the throat of Russia’s civil society movement is furnishing the hundreds of thousands that turned out with the answer to their demands.

Published on December 10, 2012 by Igor Kudrik, translated by Charles Digges 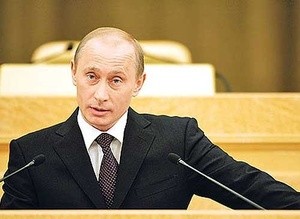 Civil society in Russia – and especially independent organizations referred to as non-governmental organization, or NGO’s – is under increasing pressure from the Russian regime. Russian NGOs that receive financial support from abroad and engage in political activity have been reqired as of November 21 to label themsevles as “foreign agents”.

This “agent” notion is one of several changes to Russia’s NGO law that was initiated by President Putin after his re-election to a third term in March. The law was passed with  lightning speed by the Putin-controlled Duma.

The agent section is one of the several amendments which President Putin has undertaken to tighten his grip on nascent protest movements among the Russian population that have sprung up over the past year. These amendments include strict penalties for participation in demonstrations not authorized by the government, including fines of up to $10,000, and were followed by an intensification of espionage statues of the Russian Criminal Code.

Now, Russian citizens will be under increased scrutiniy for high treason if they say something that is harmful to Russia to foreign organizations. In addition, all money tranfers and bank depostis from abroad for use by Russian NGOs of over $7,000 will reported to a state agency called the “Committee for Corruption and Anti-Terrorism.”

The Agent Act additionaly says that an NGO can be viewed as an agent if it engages in political activities and receives funded from abroad. Political activities are defined as activities aimed at influencing the decisions of government. In other words, this is a very broad definition, which will affect almost all NGO activity.Putin resented the protests against him in Moscow and other major Russian cities before the presidential election. Now he is firing back.

The common thread in Putin’s election campaign was a fear that Russia was under the influence of a conspiracy from abroad. It was more than hinted at by the Kremlin that all protests against Putin were paid for by the US State Department. The NGO law and other repressive laws passed since Putin’s return are a direct consequence of these conspiracy theories. It is likely that President Putin himself fully and completely believes his own propaganda about the evil and invisible hand of the West guiding the protests agaist him.

Another sad fact is that there is no domestic funding for Russian NGOs that is not conditional. And the conditions are simple: Complete loyalty to Putin and his regime. NGOs that are critical or illuminate problems that embarrass Russian authorities, such as extensive corruption and fraud, have zero chance to acheiving Russian funding for their work.

As soon as the new NGO laws came into force on November 21, youth organizations supported by Putin – groups like Nashi and Molodaya Gvardia – protested in front of the officies of several human rights organizations in Moscow. One of these demonstrations took place in front of corruption watchdog Transparency International’s office. These young protestors – called colloquially the Putin-Youth – come largely from poor suburbs surrounding Moscow and their groups are funded by the Kremlin. It is paradoxical yet illustrative that the brunt of these protests were directed against Transperency International, as corruption is the biggest problem facing contemporary Russia.

A few weeks back, Russian Defense Minister Valery Serdyukov was forced to resign. His closest aids are under investigation for coopting vast sums of money. The combined value of jewelry found in their luxury homes compares with the sum of funding Russian NGOs annually receive from aborad. There is, therefore, every reason to regard cooruption as the single biggest threat to the Russian state – to say nothing of civil society organizations and NGOs. But within Russia itself, there is little understanding of this, as members of the state are more concerned with ensuring distribution of valuable state assets among themselves and their families.

It is positive that the Norwegian Foreign Ministry has addressed the challenges to civil society in dialogue with Russian authroities. But Bellona also expects the Norwegian government to take internatioal initiative to spark broad debate about these latest discouraging developments for Russian democracy.  We also expect Norwegian authorities to include Russian representatives in official Norwegian-Russian projects, such that Norway can, by example, show that NGOs are an important and necessary component of civil society. In Russia as well.

This comment by Kudrik initially appeared in Norway’s natonal Dagsavisen newspaper on December 8, 2012.