Charges of treason against a Russian academic who earlier this month stood accused by Russia of spying for Norway in conjunction with his studies an ancient Russian group have been reduced to “inciting ethnic hatred,” the defendant told Bellona by phone after his first hearing in an Archangelsk court yesterday.

Published on November 22, 2012 by Charles Digges 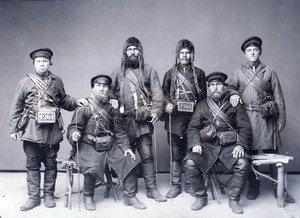 Accusations that Ivan Moseev, an Archangelsk-based scholar of the Pomor peoples of the high north White Sea area, had been working in collusion with Norway’s secret service to destabilize the socio-political situation in the northern area of Russia were not even mentioned in his first hearing Wednesday, Moseev told Bellona Wednesday afternoon.

The Archangelsk environmental group AETAS, which is closely following the case, also confirmed that Moseev would face no treason charges.

Moseev was originally scheduled to appear in court on November 12, but that hearing was postponed because Moseev was in the hospital. The next hearing in the case will be held on December 6.

Even though the case no longer appears to involve allegations of espionage for Norway, the Norwegian Ministry of Foreign affairs reiterated to Bellona in an interview that it intends to continue monitoring the case.

The ministry said the case is symptomatic of the erosion of civil society organizations in Russia following the entry into force yesterday of harsh new laws requiring non-profits in Russia receiving foreign funding to register themselves with Russia’s Justice Ministry as “foreign agents” – a term in Russian strongly associated with Stalin-era espionage paranoia.

Much of Moseev’s research and many of his visits to Norway have been underwritten by the Norwegian Barents Secretariat.

‘Still standing against Moseev are charges that he incited ethnic hatred, a crime punishable under Russia’s penal code, for his alleged promotion of the identity of the Pomor peoples of the Archangelsk area, which are tied to his supposed activities with a group called “Pomor Renaissance,” which promulgates a policy of succeeding from Russia.

Moseev made a plea for his innocence in court, he told Bellona, the full comments of which were carried on the Barents Observer news portal.

“I don’t admit any guilt,” said Moseev in court Wednesday, according to the news portal. “I did not have and I do not now have any intention or aim to excite hatred towards the Russian ethnic group, [nor] towards any other ethnic group. I devote my work to affairs entirely to the contrary – I try to bring people and nations together.”

“My professional and social activities are aimed at establishing peaceful and tolerant relations between different nationalities,” said Moseev.

While acknowledging there is a vocal minority among fringe groups preaching succession from Russia in the high north, Moseev said in interviews that his research and scholarly work has no ties to such groups.

Kommersant also said that in July the vocal Pomor minority began to attract an increasingly bullying attitude from police and other authorities toward those who peacefully identify with their Pomor heritage – but who at the same time fully declare themselves to be Russian citizens.

According to the original accusations leveled against him by the FSB, Moseev, who directs the Institute of Indigenous Peoples and Minorities at the University of Archangelsk, posted a comment in April on the site of the Ekho Russkogo Severa news portal in which he allegedly referred Russians as “scum,” something Moseev denied to Bellona and to other news outlets.

The comment post was traced to Moseev’s IP address by the site’s editors, who then reported it to the FSB. Moseev has said that its impossible he posted the inflammatory comment, as his computer was turned off at the time it was put on the web site.

He also argued vociferously in court on Wednesday that the phrase singled out as the basis for his prosecution was neither mentioned in the indictment against him, nor did the phrase, as portrayed in the local press, even refer to Russians as a group.

Even if Moseev did post the supposedly inflammatory comments, the Moscow-based SOVA Center for Information and Analysis, a non-profit that conducts research on nationalism and racism, said in its Public Post (in Russian), that the remarks were legally immaterial.

“My professional and social activities are aimed at establishing peaceful and tolerant relations between different nationalities,” said Moseev in court on Wednesday, according to the Barents Observer.

“The indictment is made upon an unclear and vague phrase which hasn’t even been announced in the indictment, and if it had been announced, everybody would understand the absurdity of it because the word ‘Russians’ isn’t even in this phrase, so there isn’t any focus on anyone,” he continued.  “I think this is complete nonsense. I absolutely deny any guilt and I consider that there can only be the verdict of not guilty.”

Why Moseev or the Pomors?

According to AETAS, the prosecution of Moseev must have been handed down from Moscow.

Medvedev was selected in 2008 to take Vladimir Putin’s place as president because the Russian constitution does not currently allow for presidents to sit for more than two consecutive terms – though places no restrictions on a president being voted back into power after a one term hiatus.

As part of a widely unpopular deal between the two men, Medvedev agreed to step down to make way for a third term for Putin – who will now enjoy six to 12 years in office thanks to amendments to Russia’s constitution extending presidential term limits under Medvedev.

But Medvedev has recently been having increasingly vocal fallings out with his boss, and many regard his days as prime minister to be numbered. Close relations with an allegedly obstreperous and secessionist group in Russia’s icy north would certainly cause a Byzantine freeze to Medvedevs political career.

Even though the charges of spying for Norway have been brushed aside, the Norwegian Foreign Ministry maintains the concern it initially expressed when Moseev was originally summoned for court earlier this month.

According to Veslemøy Lothe Salvesen, a communications advisor with the foreign ministry, Norway’s honorary consul in Archangelsk, Andrej Syalyov, was present at Wednesday’s hearing.

Salvesen told Bellona in an email interview that Syalyov had opportunity to speak with Moseev after the hearing and said he will continue to follow case developments.

“Norway has on several occasions in meetings with the Russian government raised our concern that the changes in legislation for civil society may negatively influence the ongoing collaboration between civil society in our two countries,” Salvesen wrote to Bellona.

“We consider the collaboration between Russian and Norwegian civil society an important part of our bilateral relations,” she said. 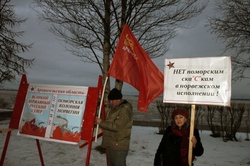 A small group of self-styled Russian patriots gathered outside the Archangelsk courtroom on Wednesday, accusing the Pomors of traitorous activities against Russia, the Barents Observer reported.

The Pomors are an ancient group of Russian hunters and fishermen who lived along Russia’s White Sea, and were active for centuries in the area now known as Norway’s Spitzbergen Island and in Finnmark. They are said by historians to have abandoned their last hunting outposts in that area in the 19th century.

They are, according to histories, a Russian indigenous ethnic people in the Archangelsk region, and their name derives from Pomor Land – or Pomorye – the ancient geographical name of European Northern Russia.

According to various Russian news agencies, the Pomors fall well short of being classified as one of Russia’s many groups of indigenous or ethnic peoples, which enjoy certain hunting, fishing and geographical dwelling rights that are connected to their ancient traditions under Russian law.

Gazeta.ru pointed to a recent poll of people of Pomor heritage, where the vast majority of respondents describe their ethnicity as “Russian.”

The legal question of what kind of ethnic hatreds Moseev’s alleged comments could inflame therefore remains to be answered.

Moseev’s studies of the Pomors have seen him travel back and forth between Archangelsk and northern Norway several times on trips financed by the Norwegian Barents Secretariat.

These trips have been described by his Norwegian colleagues as entirely cultural in character.