With the new Russian law stipulating that nonprofits operating on funding from aboard register as “foreign agents” entering force Wednesday, one is hard pressed to find an organization that actually is planning to follow through. A controversial set of amendments to the NGO law signed over the summer demands that they do.

Published on November 21, 2012 by Charles Digges 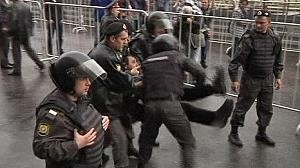 But most high profile nonprofit organizations in Russia that receive some modicum of foreign assistance underscored today that they plan to boycott the the new requirements in Russia’s law on NGOs, which were amended this summer in a rush-job, and that stipulate they register with the Ministry of Justice as “foreign agents” – a heavily pregnant Stalin-era term.

It also mandates that NGOs mark all their official communications and websites with the “foreign agent” moniker, and singles out organizations engaged in “political activity” without offering a clear definition of what that is.

The new law was passed along with a raft of other measures seen as limiting civil rights in the wake of months of mass anti-government protests.

The reasons for the boycott by NGOs range from the sheer principle of refusing to identify themselves as spies, the legal frailty of the amendments to the NGO law, and whether the law applies to foreign branches of foreign organizations.

NGOs also cited that the procedures for even registering as a foreign agent remain unclear. A member of one NGO in Russia, who asked that her name and affiliation not be used for fear of reprisals, responded to an email query from Bellona saying, “we don’t know what we have to do– mail something to the Justice Ministry, go to the ministry and declare ourselves as spies, wait for the mail asking us to declare ourselves as spies – it is a fog.”

A spokeswoman for the Justice Ministry reached by telephone told Bellona that, “Organizations should well know how to follow the new practices,” but refused to elaborate.

Mikhail Fedotov, head of Russian Presidential Council for Human Rights, Monday told Interfax that the law has to be altered because it doesn’t specify what the function of foreign agent actually are.

“This is one of the lawmakers’ obvious errors,” Fedotov told Interfax.

Russian State Duma Speaker Sergei Naryshkin, for his part, criticized those groups who have said they would not comply with the new law.

“I can only say that the law has been adopted and needs to be observed,” said Naryshkin in remarks carried by Interfax.

While observers say that much depends on how the new law is implemented in practice, some fear that the noncompliance declarations mean that the situation is bound to escalate because they force authorities to retaliate in order to save face.

Indeed, a number of nonprofits have already been singled out for closure even before Wednesday, proving, say some Bellona observers, that the new amendment will be enforced selectively against organizations standing in the way of the Kremlin’s financial interests or that would embarrass it politically.

Bellona, which has offices in St. Petersburg and Murmansk, will not be registering as a “foreign agent” for the time being, said Nils Bøhmer, Bellona’s general director in Oslo.

“The law is unclear and raises several questions about what organizations must register and what exactly “political activity is,” he said. “This makes it unclear as to whether Bellona should register” he said, adding that “our position for the moment is to wait and see.”

Bellona’s legal staff in Russia, he said, was still working to make sense of the law.

Boycotters refuse they are ‘foreign agents’

Lyudmila Alexeyeva, a veteran campaigner and founder of the Moscow Helsinki Group, promised to challenge the law in the European Court of Human Rights – a sentiment expressed by many NGOS interview both by Bellona and the Russian media.

“We are no foreign agents. We cannot call ourselves like that. This is demanded by the law, but we cannot declare wrong information,” Alexeyeva told Interfax on Monday.

Vladimir Slivyak, co-chair of Russia’s Ecodefense environmental group told Bellona simply that, “so far, we are going to boycott the new law, and are thinking of going to court over it.”

“We’ll do that when trouble appears to be real,” he said.

Ivan Blokov, program director of Greenpeace Russia, also said his organization was not registering as “we do not consider ourselves an organization ‘fulfilling the functions of a foriegn agent,”’ he wrote in an email to Bellona.

Alexander Cherkasov, head of the Memorial human rights organization told The Moscow Times that: “We won’t use that denomination and will use all legal means possible, both national and international, to oppose this law.”

Transparency International, the anti-corruption watchdog, has said the law violates both the letter and the spirit of the Russian constitution. Among others, the new NGO amendment infringes organizations’ equality before the law and violates the constitutional guarantee against self-incrimination, Transparency Russia said in a declaration published earlier this month.

Golos, the election monitor, whose investigations revealed fraud in Russia’s December parliamentary elections, sparking months of marches and which faced unprecedented pressure prior to the March presidential election, has also said it would challenge any court orders to register as a foreign agent.

Other groups have already been targeted

Despite the high profile cold shoulder to the new law, however, a number of organizations have already fallen under its heel even before the law took effect Wednesday, something Bellona’s Sigurd Egne says shows how selectively the law will be applied to remove impediments to the Kremlin’s financial interests or groups who would be critical of the government

The Russian Justice Ministry’s ouster last month of USAID, the agency that handles most US government grants, hit many NGOs hard. Several dozen of the organizations that rely on USAID funding say it is unrealistic to replace foreign funding with domestic money because local donors are often unwilling to support organizations critical of the government.

Several dozen organizations in Russia – including Golos – will feel the pain of USAID’s forced exit.

How will the law be enforced

Existing laws already enable the Justice Ministry to close noncompliant organizations for up to six months without a court order. The new law stipulates prison terms of up to two years for noncompliant NGO staff.

Alexeyeva predicted that noncompliance would be persecuted harshly. “With a normal judiciary, a court would give us right. But I have no illusions about our courts,” she told RBC Daily in an interview published earlier this week.

She went on to say that she does not fear imprisonment. “Let them arrest me. I will die in detention after a few days,” she was quoted as saying. Alexeyeva celebrated her 85th birthday in July.

But far from everyone was as pessimistic about the enforcement of the new law.

Vanessa Kogan, an American who runs Astreya, an NGO devoted to legal assistance in human rights cases, told The Moscow Times she hoped the law’s implementation would be not as severe as portrayed by Alexeyeva.

“It is well known that the Justice Ministry is not exactly thrilled with the law,” she told the paper. Kogan added that similar fears after a first law imposed tough rules on NGOs in 2006 did not materialize.

“As with any law there are loopholes, and organizations will try to exploit those,” she said.

Yury Korgunyuk, an analyst with the Indem think tank, agreed. “It all depends in the implementation, and this will be an entirely political decision,” he said.

Korgunyuk suggested that the Kremlin would let just one or two cases escalate. “They might try to scare the others into compliance,” he said.