A number of Russian NGOs receiving foreign funding have had their offices picketed by pro-Kremlin political youth movements, received intimidating letters from the same group or, in other cases been vandalized in the wake of a new law requiring them to register as “foreign agents” that took effect Wednesday.

Published on November 23, 2012 by Charles Digges 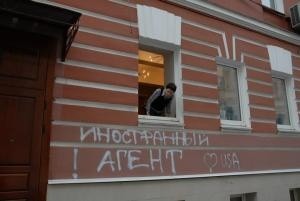 The entrances to the offices of Memorial and For Human Rights, two prominent civil rights groups headed by veteran activists, were spray-painted with the words “Foreign Agent,” along with a heart shape next to “USA,” according to photos posted on Memorial’s Facebook page.

Other organizations such as the anti-corruption group Transparency International were targeted by leaflets and a demonstration by a group identifying itself as “The Night Watch of the Movement Young Russia” – a group that is said to have close ties to President Vladimir Putin’s ruling United Russia Duma party.

The Moscow office of the US Russia Foundation (USRF), a donor fund that supports legal reform and institutional development in Russia, was also targeted by protests by the pro-Kremlin Young Guard, another youth wing supported by United Russia.

The group plastered the office with a large sticker reading “Foreign Agent” and protested what they alleged in a press release (in Russian) were ties between the fund and the US State Department – a popular Kremlin battle cry against the homespun opposition that took to Moscow’s streets by the thousands throughout the winter to protest December’s rigged Duma elections.

The law that took effect on Wednesday requires Russian NGOs working in the “political sphere” and which receive financing from abroad to register as “foreign agents” with Russia’s Ministry of Justice.

The same day, a raft large and powerful rights and environmental organizations reiterated that they would not register themselves with the Russian Justice Ministry as foreign agents. Among them were the vandalized groups Memorial and For Human Rights, and Transparency International, which received the intimidating letter.

Joining them in refusing to sign on as foreign agents were the Moscow Helsinki Group, Ecodefense, Greenpeace, vote monitoring group Golos, and dozens of others.

Niether has Bellona has signed up its Russian offices as “foreign agents,” citing that the law is unclear about precisely what organizations must adopt the foreign agent moniker, and demands that a clearer explanation of “political activity.”

Groups violating the murky law may face staggering fines and their activities suspended for up to six months without a trial. Their members could also face jail time.

How to register as a spy: NGOs don’t need to know, says ministry

Yet, questions remain as to how the law is even supposed to be followed – questions that Russian government officials charged with its enforcement are reluctant to answer.

One human rights group complained to Bellona on Wednesday that it had received absolutely no instructions on how to even register itself with the Ministry of Justice as a foreign agent.

And on Thursday, the Agora human rights group filed a complaint with a Moscow court against the Justice Ministry, saying it had previously contacted the Ministry asking for explanations on how the new law would be implemented and enforced.

But the Ministry responded by saying it was not obliged to provide such information to Agora on the basis of the fact that it was an NGO, Agora members told Bellona.

A spokeswoman for the Justice Ministry reached by telephone told Bellona that, “Organizations should well know how to follow the new practices,” but refused to elaborate.

NGO grants to be scoured by money laundering units

The law’s entrance into force was also accompanied by crushing new banking procedures that were instituted by decree on Wednesday to coincide with the law taking force.

By the new decree, Russian banks have been told to report all transfers of money from abroad to domestic NGOs in excess of 200,000 roubles ($6,400), meaning that NGO financial activities will now be closely monitored by banking financial crime units, said Alexander Nikitin, chairman of the Environment and Rights Center (ERC) Bellona in St. Petersburg.

Nikitin noted the financial dealings of Bellona and other NGOs across Russia, which by law had always been transparent and available for audit by relevant bank and tax authorities, would now be subject to review by Russian secret services’ criminal, anti-terrorism and anti-money laundering units.

In commenting on the incidents of vandalism and intimidation at Memorial, For Human Rights and Transparency International, Nikitin said such events would now only metastasize.

“[The NGO] law unties the hands of the Young Guard, Nashi, Patriots and other idiots,” he said in reference to the numerous Kremlin-endorsed youth movements.

“Moscow will feel it first, and then other areas like St. Petersburg, Murmansk and other regions,” he said. “It’s just a matter of time. We must expect this.”

Rights groups, including Bellona, which maintains two offices in Russia, other prominent rights groups, and even the head of Putin’s own Human Rights Council, Mikhail Fedotov, have slammed the law as vague and aimed at intimidating civil society groups to quash dissent against the Kremlin.

The vast majority of the groups also cite that the new law offers only vague substantiation of what, precisely, “political” means.

Registered or not, anti-Western sentiment will take hold

Commenting on the incidents of intimidation against the Moscow-based NGOs, Bellona’s general manager in Oslo, Nils Bøhmer said, “This confirms that the new law will encourage anti western sentiment in Russia.”

“Even if NGOs do register under the law, they will experience anti-western sentiment – something our offices in Murmansk and St. Petersburg are already seeing,” said Bøhmer.

“As a whole, [such intimidation] will scare Russians away from trying to work for a better society,” he said.

A press release about targeting Transparency International with the leaflet and subsequent protest, which the Night Watch of the Movement Young Russia reproduced on its website (in Russian), said that group had targeted Transparency International to “remind [its] representatives about the entrance into force of the law on foreign agents and about the necessity of foreign agents to ‘get out of the grey zone’ and put themselves on a special list.”

The group claimed that some 70 demonstrators had gathered in front of Transparency International’s office, a figure the group’s head, Yelena Panfilova brushed off with fatigued irritation on her personal Facebook page, saying she had counted no more than 20.

“Somebody please inform Young Russia that we are a Russian organization. Thank you,” wrote Panfilova.

Lev Ponomaryov, head of For Human Rights, however, was not taking matters quite so lightly.

“We will not follow this law,” he told Reuters in reference to the NGO law. “It is not lawful.” He said that he had notified the police about the graffiti.

“We have to show some sort of civil disobedience. They are threatening us and if they apply some sort of repressions to us, we will try to make our case in courts,” he told Reuters.

In a separate interview to the Russian media outlet RIA Novosti, Ponomaryov said he had no idea who the culprits were.

“Another question is whether it was a team, or whether there was some kind of order from above,” he said.

The swagger adopted by pro-Kremlin youth movements like Youth Guard and Young Russia, however, suggests that intimidation level tactics against NGOs are only just beginning, and further implies that the front line of anti-western sentiment will be taken up by groups of organized teens and twenty-somethings with nationalist inclinations.

The choice by Young Russia  – who protested Transparency International to wear sunglasses, its use of the term “grey zone” in its communiqué, and the inclusion of “Night Watch” in its name are references to the Russia blockbuster film of the same name.

In the film, which created an immediate cult following, the forces that control night and day respectively do battle. In this manner, and as is the case with many other pro-Kremlin youth movements, anti-western sentiment could rapidly gain traction among the coming generation of new leaders as the new “hipster” fashion.

“These are people from low income and low educational backgrounds – the core of Putin’s electorate,” he said. In the absence of any political opposition and a prevalence of rampant corruption, youth participation in movements like Night Watch “directs their attention against some dark empire and away from domestic troubles.”