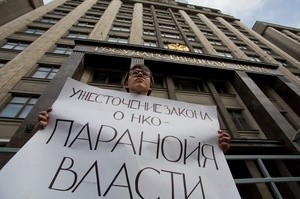 That phrase would have to be included in all the relevant NGOs’ online and printed materials, and organizations receiving foreign funding would have 90 days to register as “foreign agents” with the Ministry of Justice or face heavy fines.

The bill – which passed today’s reading with the support of 333 of the Duma’s 450 deputies – is expected to hastily be adopted as law by the Duma by mid July. It faces two more readings by lawmakers and debate in the Duma’s upper chamber, the Federation Council. Russian media has reported that the law would enter into force by September, after the Duma returns from summer break.

The Kremlin says the bill is needed to protect Russia from outside attempts to influence internal politics.

But critics say the authorities are using the law to try to crush dissent, and is to vague in its terminology.

“The proposed legislation is too wide in reach,” Mikhail Fedotov, head of the Presidential Council on the Development of Civil Society and Human Rights told Russian news agency RIA Novosti.

“The law could even concern the Russian Orthodox Church, as the law relates to any non-commercial organization that receives funds from foreign citizens,” Fedotov noted. “And, of course, the Orthodox Church receives donations from abroad.”

Its murky wording, said Fedotov, could even affect Russian government ministries that accept foreign funding for various project. One big for instance there is Russia’s Ministry of Defence, which received millions of dollars a year in US funding to dismantle the Soviet nuclear arsenal.

“I can’t imagine a Russian ministry being classified as a foreign agent,” he said.

The Federation Council, said on Thursday that it would not support the bill in its current form, RIA Novosti reported.

Late in the afternoon, Russia’s Supreme Court similarly recommended the bill not be accepted in its current form due to vaguaries in the language.

This would suggest that there will be some revisions to the bill coming before it enters its second reading, which has not been scheduled yet.

Overall, however, the proposed law is inspiring on the one hand brute defiance and on the other, dry humor among NGOs that would be affected.

Accord the Russian media spectrum this morning, debates led by NGOs suggested various tactics for dealing with the law that would essentially brand them as spies by borrowing the Stalinist term “foreign agent” and forcing them to self-apply it.

Bellona’s Alexander Nikitin, chairman of the St. Petersburg based Environmental Rights Center Bellona – which would be impacted by the law – reviewed what his colleagues in Russia were saying.

Lyudmila Alexseyeva, head of Moscow’s venerated Helsinki Group, and Lev Ponomaryov, head of the For Human Rights organization, have told various media that they will under no circumstances register as foreign agents.

“This is a liquidation of the human rights movement in Russia.” Ponomaryov said. “We will not obey this law if it is adopted. We will not register as foreign agents.”

Yet another gathering of NGO that receive foreign funding, but are far from political activity, that took place yesterday in St. Petersburg, also came up with a novel idea: to absolutely register as “foreign agents.”

Nikitin say the bill under consideration did not stipulate that NGOs within its purview have to stop with the appellation of “foreign agent.”

“Many groups are proposing, for instance, that they declare, by law, that they are indeed ‘foreign agents.’ and continue to describe that that means ‘we are not thieves, swindlers ridden with corruption or liars,’” said Nikitin.

“In that sense, many NGOs are thumbing their noses at the proposed law and having rather a good time thinking of ways to deal with the ‘foreign agent’ label they would be force to apply to themselves,” he said.

Nikitin said Bellona would work out its own strategy and wording should the law be passed. According to many Russian media, that could come by mid-month, before the Duma breaks for the summer. It will still face a second reading and proposed amendments after today’s review.

Under the bill, foreign-funded NGOs involved in politics would also have to undergo financial audits and issue biannual reports on their activities.

The United Russia party claims foreign governments are using NGOs in Russia as cover to bring about political change.

Vyacheslav Nikonov, an MP for the party and one of the bill’s authors, told the BBC that: “There is so much evidence about regime change in Yugoslavia, now in Libya, Egypt, Tunisia, in Kosovo – that’s what happens in the world, some governments are working to change regimes in other countries.”

“Russian democracy needs to be protected from outside influences,” he added.

The bill’s critics dismiss that as Kremlin paranoia, and say the government is seeking to stifle civil society.

It was a foreign-funded NGO, Golos, which presented evidence of widespread vote-rigging in Russia’s recent parliamentary and presidential polls.

At the time, the government accused the United States of using NGOs – primarily US funded ones ­– to try to influence the political circumstances in Russia.

On Thursday the Helsinki Group’s Alexeyeva proposed that foreign governments prepare reprisals against the Kremlin by restricting travel and freezing assets of those Duma deputies who vote for the law under the so called Magnitsky Act passed in June by the US Senate.

The proposal was similar to the strategy proposed by Nikitin himself on Monday.

Last month, the US Senate passed The Sergei Magnitsky Rule of Law Accountability Act, sponsored by US Democratic Senator Benjamin Cardin and unanimously approved by the US Senate’s Foreign Relations Committee.

The act would impose visa bans and asset freezes on Russian officials allegedly involved in the death of 37-year-old Russian tax lawyer Magnitsky, as well as in other gross human rights abuses in Russia or anywhere in the world.

Magnitsky, who had alleged wide-scale tax fraud sanctioned by Russian officials before himself being arrested, died days before the one year limit that he could be held without trial would expire. His case exploded internationally as it came to light he died as a result of torture and police brutality.

“I am determined to ask the US Senate, the House of Representatives, as well as the European Parliament to add the authors [of the NGO bill], who violate the supremacy of the law, to the Magnitsky list,” Alexeyeva said, according to RIA Novosti.

She also intends to publish on the Internet a list of MPs who will vote for adoption of the bill, and appeal to the Russian president to veto it.

“These people [of United Russia] have foreign bank accounts, houses in foreign countries and send their children to foreign boarding schools,” said Nikitin. “Something like [the Magnitsky Act] could impose limits on these possibilities.”

In a move of soladarity later in the day, all 237 members of United Russia signed the bill, authored by United Russia deputy Alexander Sidyankin, as co-authors in a move that would make them all culpable under the Magnitsky list should the US impose such a sanction if the bill passes, Interfax news agency reported.

There are some 230,000 NGOs operating in Russia, the vast majority of which have nothing to do with politics.